Sometimes it's easy to forget 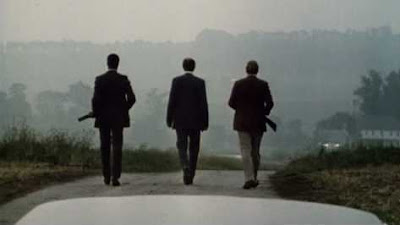 (WARNING: SPOILERS THROUGHOUT)
By Edward Copeland
When I was a sophomore in high school, working on the school newspaper and getting my first chance to write full-fledged movie reviews, one of the first I penned was of the movie Witness, which marks its 25th anniversary today. I remember how much I liked Peter Weir's film then, but in the time since, it's not a film I've thought about much and I can't even be sure I re-watched it until last week. It's always a crap shoot to pay a return visit to a movie you liked when you were younger, especially if you haven't seen it since, but it is with welcome enthusiasm that I report that the viewing last week reinforced my opinion that Witness was, and is, a very good film. 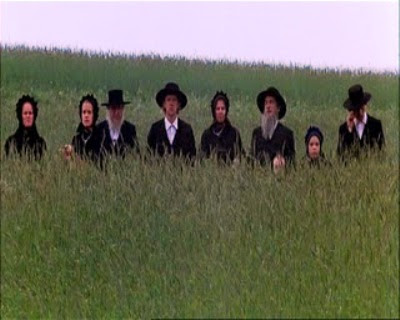 My original 1985 review doesn't exist anymore, at least where I can re-read it, though I'd love to, to see how many of my thoughts match and how many new ones came from my new viewing, but alas, it is but a hazy memory. From the opening moments of the film, as John Seale's gorgeous cinematography captures the sight of many Amish men, women and children appearing through the tall grass as the beginning notes of Maurice Jarre's beautiful score begins to soar, Witness captures your attention. There is nothing in the men's dress or their surroundings to indicate time or place until the words appear on the screen: PENNSYLVANIA 1984.

Of course, this lush Lancaster County, Pa., setting is just the starting point for the central plot of what will be 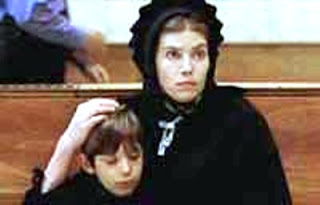 a thriller whose central point will take place in a Philadelphia train station where the Amish widow Rachel Lapp (Kelly McGillis) and your young son Samuel (the wide-eyed Lukas Haas) have traveled en route to visit a sister in Baltimore. While waiting for the delayed train, the curious young boy is fascinated by a world he's never seen, from a simple device such as a water fountain, or mistaking a Hasidic Jew from behind as a fellow Amish to, most disastrously, witnessing a murder while using the bathroom. Rachel doesn't want to get involved, but the policeman leading the investigation, Det. Capt. John Book (Harrison Ford, insists that Samuel is a material witness and he must help them find the killers because the victims was an undercover narcotics cop.

Witness is dated in one glorious way: As Book take the Lapps to the police station to look through mug shots and police lineups, you see the other officers fill out reports on and produce the marvelously nostalgic click- 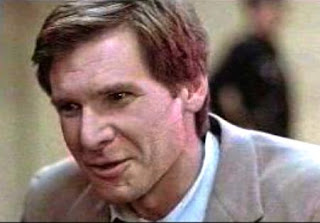 clack of typewriters. Goddamit, I still miss those contraptions. No computer word processing program will ever equal their magic or produce that sense of achievement you feel with each completed page. I digress. The young Amish boy does ID the killer, but it causes Book and his partner more complications than he expected: It's not one of the expected street drug hoodlums who did the deed, it is a decorated Det. Lt. James McFee (Danny Glover, in one of his earliest notable appearances). After hiding the Lapps at the home of his sister (a feisty Patti LuPone), Book goes to his boss Chief Paul Schaeffer (the quietly sinister Josef Sommer) and after Glover and his partner Det. Sgt. Elden Carter (Brent Jennings) soon after try to kill him, he realizes that Schaeffer is part of the corruption. A wounded Book whisks the Lapps back to their Lancaster County home, hoping they'll be safe while he gets away, but his injury gets the better of him and he is taken in by Rachel and her father in-law Eli (Jan Rubes). Once Book gets stronger, he doesn't just hang out, the Amish put him to work, teaching him to milk cows and using him to help in the film's famous barn-raising sequence. 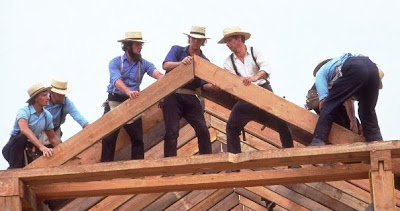 What's so impressive about Witness is its approach to the clash of cultures. There is subtle humor, but it almost always comes at the expense of the Philadelphia detective. The Amish and their ways are treated with 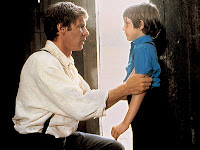 nothing but respect and, in a way, the John Book and little Samuel Lapp characters serve almost as mirror images of each other in their respective curiosities about the other's culture. The Oscar-winning screenplay by Pamela Wallace, Earl W. Wallace and William Kelley, aided immensely by Weir's direction and Thom Noble's Oscar-winning film editing, masterfully mixes and matches the various themes and plots circling the film so that while Witness at any one time could be classified as a thriller or a romance, actually it is simultaneously both and neither. Even the evil police chief (Sommer) paints the police force and the Amish as parallel organizations as he tries to pressure Book's partner Elden for information as to where the detective is hiding, trying to frame Book as the crooked, murderous cop.

"We're like the Amish, we're a cult, a club. We have our own rules.
John has broken these rules."
Seeing Ford 25 years younger also reminds me of how much looser a performer he used to be in the early portion of his career. He's grown stiffer as an actor as he's grown older. In Witness, coming off the Star Wars 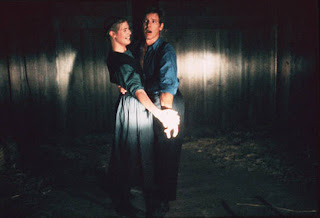 trilogy, two Indiana Jones films, Blade Runner and with The Mosquito Coast and his underrated comic turn in Working Girl to come, he's in a serious situation, but he's still got a spring in his step, whether it's his look when he awakes after recovering from his bullet wound to a strange circle of bearded men in black coats or when he finally gets his sister's car's battery restarted and starts jamming to the radio playing a cover version of Sam Cooke's "What a Wonderful World," inspiring him to beat his hands on the car's roof and then whisk an initially reluctant McGillis into a barn dance. Her expressions are priceless as well, her slowly appearing grin set against a red background to represent the sin against her religion she's straying close to committing. That's another great thing about Witness. While there are sparks between Book and Rachel and even hints of a triangle with another Amish man (Alexander Godunov), the film is smart enough to let it go beyond one passionate kiss. Rachel belongs in Lancaster County and John Book must return to Philadelphia or it would undermine the movie's sense of reality. 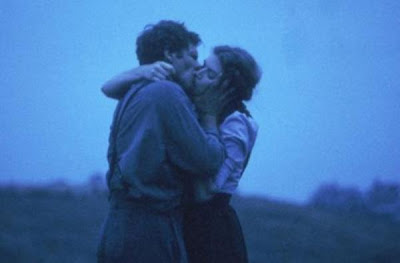 The story of the crooked cops searching for Book and the young boy cannot go unresolved and the script doesn't disappoint on that element. While Schaeffer has been frustrated in his attempts to figure out where in Amish country Book might be hiding (he can't just look them up in a phone directory), an incident on the streets of their nearby town where Book acts decidedly un-Amish toward some bullies who thinks it's fun to 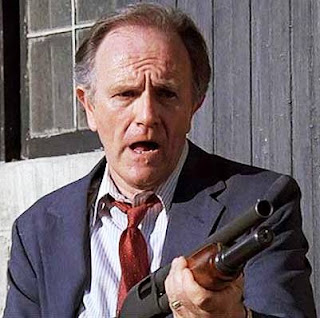 taunt the Amish ends up in a police report that makes it back to Philadelphia. Weir makes the impending showdown taut with tension as you see a black car slowly drive up a hill, looking decidedly out of place, before dropping back again. Soon enough, an armed Schaeffer, McKee and his murderous cohort Det. Fergie (Angus MacInnes) are stalking toward the Lapp home. Book and Samuel happen to be away, but it also means that Book isn't near his weapon, which Rachel insisted be put away because of their insistence on nonviolence. The film stays true to Amish principles to the end. (There is no High Noon-like cop-out where Quaker Grace Kelly decides it's OK to fire a shotgun and slay the bad guy at the last moment. Book even gets rid of one of the three bad guys through use of a grain solo before obtaining that weapon and Schaeffer faces justice because Book stands him down backed by the community of Amish men. Sometimes principles prove more powerful than guns and so do movies that stick to them from beginning to end, without settling for endings that might prove more crowd-pleasing but would ring unbearably false.