By Kevin J. Olson
I'll always remember Robert Rossen's The Hustler for being one of the first examples of classic American film I was exposed to. I was a freshman in high school when I first saw it, and it's been one of those films I continue to return to ever since. I love happening upon The Hustler when it's on television because it's one of those handful of special movies where the minute I see it, I have to finish the film because it's so easy to get sucked into the story. It also takes me back to the first time I saw the film and how awed I was by Paul Newman's aura. That was one cool dude, and I wanted to look as cool playing pool as he did (not that it's hard to guess, but I failed miserably). Now, on the film's 50th anniversary, I can't help but dust off the old chestnut "They don't make 'em like they used to" because The Hustler is certainly one of the most iconic, lasting films of American cinema.

Here is a sports movie at its heart that is more concerned with the human element than "the big match." The image above says it all: This is Newman's film through and through. "Fast Eddie" Felson is one of the most memorable characters of Newman's storied career, and it's the depth of the character that makes The Hustler so much more memorable and lasting than your average sports film. Before we get there, I must talk about that opening 30 minutes and its impact on me as an impressionable 15-year-old.

What I love about the way Rossen and his editor Dede Allen (whose next film would be Bonnie and Clyde) open the film is the fact that they don't waste time trying to explain the nuances of the game of pool. Set to a jazzy score by Kenyon Hopkins, the opening credits play out over freeze-framed images of people playing pool. I remember when I was in high school just being struck by how cool the opening was. I mean, I was watching this in the '90s and thinking, "Yeah, this is a cool movie." And then sure enough, after really cool credits, there's Paul Newman (who we've already seen be pretty damn cool in the pre-credits sequence), shootin' pool in a suit and looking really cool doing it. I know I wasn't the coolest kid in school, and proclaiming to your friends that you would rather be more like Paul Newman from a film made in 1961 than whatever actor, athlete or musician was cool in 1996 isn't going to impress too many people, but damn, I wanted to be Paul Newman in The Hustler. I would quote lines from the movie all the time ("I gotta hunch, fat man, I can't lose" was my favorite). Newman even made broken thumbs look cool.

OK, let's get back on track. Because the film is something more than just a cool piece of cinema that left an impression on this 15-year-old. What we come to realize rather quickly with the opening 30 minutes of the film is that we're being thrown into this world of seedy pool halls, flim-flams, fast-talking characters, dames and a protagonist's obsession with bagging that big fish. Now, this description sounds like that of a noir; however, The Hustler is not a noir — even though it does employ some aesthetics of noir and has an existential premise at its heart — because of the way Rossen deals with Eddie's love interest, Sarah Packard (Piper Laurie). Rather than have her be a femme fatale where she leads Eddie down a slippery slope of self-doubt and disillusionment, she is the moment of clarity for Eddie; the one character in the film that tries her hardest to get Eddie to leave the "twisted, perverted and crippled" world he inhabits (one of the most devastating moments of the film is the appearance of those three words on a bathroom mirror) and to see that there is more to life than pool and Eddie's short-sighted obsession with defeating Minnesota Fats (Jackie Gleason). Sure, these are flawed characters, but Sarah is someone who tries to save Eddie rather than burden him.

The film is influential in how future sport films and con films were made, but beyond that it's most memorable for its characters. I love the way that Newman portrays Eddie as someone in awe of his nemesis, Fats, and likens him to a dancer when he's watching him maneuver around the pool table. That opening 30 minutes of the film is so well observed and constructed that we feel just as exhausted as the characters. Part of that is thanks to the CinemaScope cinematography by Eugene Shuftan where we always feel cramped but not too cramped so that we always have a good enough view of the action; we become one of the onlookers in the pool hall (Shuftan also uses the edges of the frame well in the more contemplative, non-competitive scenes where Eddie needs his space to figure things out). It's amazing how those opening scenes of pool — the juxtaposition of Fats and Eddie — just melts away and part of that is because, like Eddie, we're in awe of what we're seeing. It's an interesting decision by Rossen not to try to educate the audience on pool; rather, he just enjoys shooting the scenes and letting the audience observe the action the way Eddie observes the action.

In addition to its influence and coolness, the performances are what I think makes the film so beloved and fondly remembered. Fifty years later, there still may not be a more recognizable character from a sports movie than "Fast Eddie" Felson; a character so beloved that he gets his own sequel The Color of Money. I can't think of too many sports films that spawn sequels because of the character rather than the content. If "Fast Eddie" arguably is the most recognizable character from a sports film, then his nemesis is surely second. Minnesota Fats (based on a real pool player who went by the nickname "New York Fatty") gives "Fast Eddie" a run for most recognizable and memorable character from a sports film. Gleason's portrayal as the portly pool shark remains ingrained in the minds of film lovers everywhere. Gleason makes the rare dramatic turn here in one of American cinema's most iconic roles that's been parodied on Seinfeld and The Simpsons. Whether you've seen The Hustler or you haven't, you've certainly heard of Minnesota Fats. 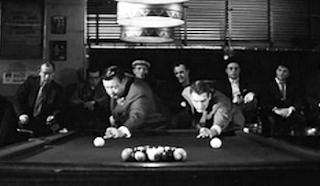 At its core, The Hustler is a film that plays with the conventions of the sports genre. "Fast Eddie" is told by Bert (George C. Scott) that he lacks character, and because of that lack of character, Eddie will never defeat Fats; Eddie is too weak according to Bert whose job it is by film's end to rein-in Eddie. In a normal sports film, the character finds redemption in the final showdown or the big game (that certainly happens here for a brief moment when Eddie looks at Bert and plays fast and loose, destroying Fats game after game), and how through victory in those circumstances our hero overcomes the antagonist; victory defines heroism. In Rossen's film, we see Eddie's maturation (via his tragic relationship with Sarah) come as a reflection on the events that have taken place outside of the pool hall. The Hustler cleverly steers away from the cliches and tired tropes of the sports genre (or just sports stories in general) and becomes a story about a man who realizes victory is meaningless if you've compromised your character.

Preachy, sure, but Newman's monologue to Bert at the end of the film is delivered so earnestly that it has no problem being just as memorable as the really cool pool elements of the film. Eddie isn't a guy who has it all figured out, and in 1961 audiences were becoming more and more tuned-in to characters on existential journeys such as "Fast Eddie" Felson. Newman was the perfect actor (and one of the best of his era) for pulling off the balancing act of showing a character who is simultaneously tough and contemplative; the kind of character that is obsessed with winning and wears their flaws on their sleeve. This was something relatively new in American cinema, and the final moments of the film when Newman delivers the verbal blows to Bert without looking at him is a brilliant and poignant moment because Eddie feels just as much to blame ("We turned the knife, Bert") for Sarah's death, and there's a real sense of epiphany in those in spite of his triumphant moment over Fats. The Hustler is really quite fascinating in that regard.

So, 50 years later (almost 15 since I first saw it), The Hustler remains one of the most entertaining films in American cinema with two iconic performances cementing its status as an American classic. I watched it twice this week in anticipation of this essay, and I'm still so in awe of Newman's aura (I still wish I was cool enough to play pool in a suit), and so absolutely and steadfastly behind Eddie — hoping and wishing that he succeeds and finds happiness beyond victory at pool — regardless of how many times I've seen the film that it's no shock to me how The Hustler is viewed by the majority as more than just a cool sports movie; we see it is as a brilliantly acted, timeless character study that is more interested in the people who play the sport than the sport itself.

Comments:
One thing about Newman is that he was that rare combination of a sex symbol and a character actor and I think his acting got better with age (and he aged very well too as opposed to say Redford who to me always was more star than actor which has become more apparent as he's lost his looks). As good as he was in his early films, he was even better later in films such as Nobody's Fool.

Yes. Newman played both personae perfectly. He was a good looking guy, but he was so much more than that as an actor. One of my favorite performances of his is from Arthur Penn's The Left Handed Gun.

I agree with your comparison to Redford. Never much cared for Redford the actor. I love Nobody's Fool!