When the Machines Tried Again

By Damian Arlyn
I remember when my dad took me to see Terminator 2: Judgment Day on the big screen 20 years ago. I was a sophomore in high school and went into the movie with virtual ignorance of what I was about to see. I had no idea who James Cameron was (even though I had already seen and loved two of his movies, Aliens and The Abyss). I also, having never seen the original Terminator, knew nothing about the backstory of John Connor, his mother and the post-apocalyptic future wherein the few remaining humans battled the artificially intelligent machines. I soon discovered, however, that that didn't really matter because the second film basically stands on its own as an exciting, suspenseful and technically innovative piece of cinema. It remains to this day one of the most thrilling experiences I've ever had in a theater.

I remember, after being "blown away" by T2, renting The Terminator and being a bit let down by it. I have, of course, since come to appreciate the film very much but at the time I didn't find it nearly as exciting or technically impressive at its sequel. T2 had numerous action sequences that kept me, as the cliche goes, on the edge of my seat (the ravine chase, the asylum escape, the climax at the steel mill, etc.) and the special effects were, to my relatively young eyes, absolutely breathtaking. 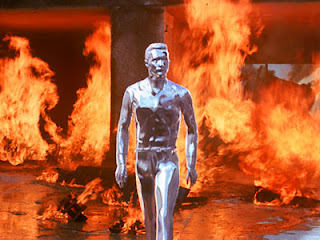 I realize now that T2 (and Spielberg's Jurassic Park, which came out two years later) was made at a very exciting time in the development of cinematic technology. Computer-generated imagery was allowing filmmakers to start putting things in their movies nobody have ever seen before, but they were still being used to enhance stories rather than take the place of them. Also, audiences had yet to become savvy to what digital imagery was fully capable of or how it was produced (frequent exclamations of "How they did do THAT?" could be heard during this time), so moviegoers still "believed" a lot of what they saw. They still perceived the images on screen as being, in a sense, "real" (unlike nowadays where everything is basically treated as if it's animation). The liquid metal transformations of the film's villain were the most impressive visuals to come out of T2, but it was actually Sarah Connor's dream sequence involving a nuclear explosion in an American city that probably had the biggest impact on me personally. I knew what a nuclear bomb was and what it was capable of but I had never seen it dramatized in such a visceral, chilling way. I can't even remember the last time a summer movie had this kind of a lasting effect on me, but even now whenever I hear the phrase "nuclear explosion," I flash back to that scene (and not, thankfully, Indiana Jones and the Kingdom of the Crystal Skull). 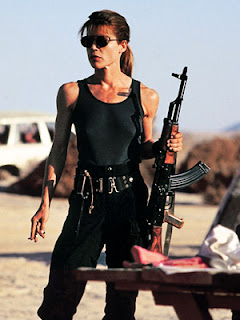 For the most part, Cameron did a bang-up job casting the flick. Linda Hamilton returned as Sarah Connor, but no longer the scared waitress hiding behind a big, strong man for safety, she has turned into a hardened, ripped survivor, yet Hamilton still was able to allow twinges of vulnerability creeping in from around her rough edges. As the shape-shifting T-1000 Terminator, Cameron found Robert Patrick, a young actor whose only other recognizable role was one of three dozen terrorists Bruce Willis dispatches in Die Hard 2. Although Patrick would later go on to do several seasons of The X-Files, to me he will always be the cold, ruthless killing-machine who wears a police uniform and can turn his arms into giant blades. The weakest of the group, unfortunately, is Edward Furlong. I feel a little bad saying this since Furlong has had some rough experiences recently, but while his rebellious attitude appealed to my 15-year-old self, as a 35-year-old I not only find him to be an annoying brat but Furlong's acting seems, quite frankly, pretty bad at times. Perhaps in the hands of a better actor, John Connor might have come off as a more believable and sympathetic character, but with Furlong it just doesn't work.

The star of the film though is, was and always will be Mr. Schwarzenegger. While it is nearly impossible to watch Arnold's past film performances without being reminded of the decisions he has since made in his public 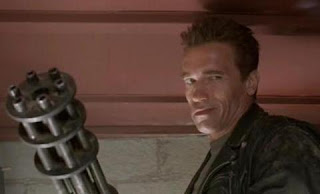 and private life (a problem that applies to watching old Mel Gibson movies now as well), one can still see why it wasn't too long ago that Schwarzenegger was nothing more or less than just a super cool, extremely well-built movie star with a hard-to-spell name and a foreign accent. Like some of his other action movie colleagues such as Jean-Claude Van Damme and Steven Seagal, Schwarzenegger will never be accused of being a great actor (though he had an undeniable screen presence and charisma), but in the Terminator movies Cameron brilliantly exploited his acting limitations and combined them with his obvious super-human qualities. Suddenly Arnold's size, strength and "stiffness" was believable. He was the perfect choice for the Terminator and, for my money, it's Arnold's best as well as most iconic role.

As I look back on T2, I am reminded of how far big-budget, effects-laden summer blockbusters have come in the last 20 years. As I write this now, explosion-extraordinaire Michael Bay is making millions of dollars inflicting his latest big screen obscenity on audiences and, from what I can gather from the reviews, things like story and character are being sacrificed in the process. I never thought I would ever say this about T2, but it not only seems positively subtle but infinitely more human by comparison. Maybe the machines don't need to wipe us out after all. Before long, we'll be the machines ourselves. 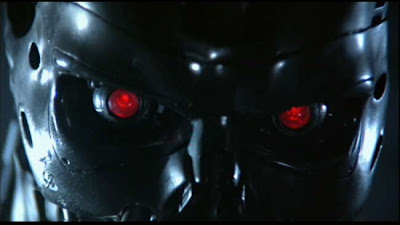