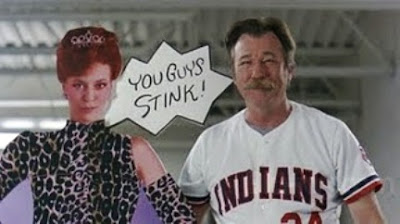 By David Gaffen
For avid moviegoers one of the pleasures of the film-viewing experience is the chance to see recognizable faces again and again — character actors who are so instantly familiar that they bring a knowing smile upon their first appearance on the screen. Sometimes these people turn, however slowly, into the kind of name that ends up third- or fourth-billed in a movie, like Steve Buscemi or Sam Elliott, or into a strange sort of star such as Philip Seymour Hoffman.

More often than not, though, they appear in what seems to be every movie made, like M. Emmet Walsh. We lost one of those character actors recently, a gem of a movie presence, James Gammon, a longtime theater performer who was best known for his portrayal of Cleveland Indians manager Lou Brown in Major League.


Gammon had a bushy mustache and one of the most recognizable voices in the business, a raspy, gravelly croak perfectly suited for cowboys and weary authority figures. He shows up in Urban Cowboy and had a memorable bit in Silverado as a gunman incredulous that Scott Glenn’s character has brought a posse to one of his best hideouts.

Major League was released in 1989 and exists in the public consciousness as a sister to Bull Durham, which hit theaters a year earlier, because they share a subject matter (baseball) and they’re both comedies.

The reality is that Major League isn’t half the movie Bull Durham is, and without Gammon, it would be more or less unwatchable.

Looking back, with the exception of Bob Uecker’s moments as the team announcer, just about every amusing part of the movie involves Gammon in one way or another. He dismisses Wesley Snipes’ Willie “Mays” Hayes, who says, "I hit like Mays but I run like Mays," after he bats a pop-up with this terse summation: “You may run like Hayes, but you hit like shit.”

His early reaction to Dennis Haysbert’s breaking-ball challenged Pedro Cerrano is another great throwaway moment. Cerrano is crushing the ball during batting practice, and Gammon muses, “This guy hits a ton. How come nobody picked him up?” Cerrano then whiffs, badly, at a breaking ball, and Gammon, deflated, groans, “Ohhhhh.”

Frequent moviegoers are demanding of actors, generally not wanting to see big-name guys assume the same persona throughout each movie, which may be part of the reason certain stars seem to dim after they’ve been seen mining familiar ground. (Samuel L. Jackson’s shtick, for one, is really tired these days.)

Character actors get a good bit of latitude in this way, perhaps because their part in a production is limited, and so a familiar personality livens up the screen for a brief period of time before they fade into the background. Think of Dylan Baker in a blink-and-you’ll-miss-it moment of glee in the underrated Changing Lanes, or Bill Nighy’s venomous pharma exec in The Constant Gardener.

Gammon will forever be one of those. He had a couple of good meaty roles in later years, playing another cowboy in Traveller, a little-seen, but interesting character study with Bill Paxton and Mark Wahlberg, and one of the only roles really worth a darn in the overwrought Cold Mountain.

But it will be Lou Brown for which Gammon is most remembered for movie fans. It’s fitting that the sequel, Major League II, was vastly less successful than the original. (The original grossed nearly $50 million; five years later, the sequel only made $30 million.)

On some level, that had to be for the disastrous decision by the writers to sideline the character with a heart attack, only to give more screen time to the sleep-inducing character played by Tom Berenger. Lou Brown, given the chance to look at the script, would have reacted to that in the same fashion he did when confronted with an annoying provision in Roger Dorn’s (Corbin Bernsen) contract — threw it on the ground and pissed all over it.