The Next 60 Seconds Are All That Matter 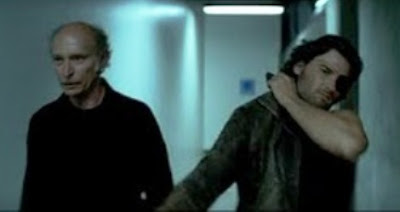 By J.D.
John Carpenter is one of those rare filmmakers that entertains while also trying to say something about the society in which we live in. It is a tough balancing act that few can maintain but Carpenter's films make it look easy. From the special effects opus/remake drenched in paranoia of The Thing (1982) to the two-fisted diatribe against Reaganomics of They Live (1988), he hasn't been afraid to sandwich a thought-provoking message in between action sequences. In this respect, his films are much more than genre pictures; rather they critique the problems of contemporary society. And for its time, Escape From New York(1981) was no different. Carpenter's film examined the validity of the presidency and the increase of crime and disguised it as a slick, futuristic race against time that was very prescient, going on to influence similarly minded and looking films for years, including a fascinating subgenre of Italian rip-offs.

Escape From New York is set in 1997 (?!) and crime in the United States has grown so bad that Manhattan Island in New York has become a maximum security prison with one simple rule: "Once you go in, you don't come out." One night, the president's plane is taken over by terrorists who crash it into the prison. The president (Donald Pleasence) escapes but quickly becomes a prisoner of the inmates led by the Duke (Isaac Hayes). It seems that the president is carrying a vital piece of information that is to be delivered to a historical summit in Hartford. Enter Snake Plissken (Kurt Russell), an ex-soldier, now legendary fugitive who has been captured by the government and is scheduled to be transferred into the prison. Instead, Police Commissioner Bob Hauk (Lee Van Cleef) offers him a deal: go into the prison, find the president, and bring him and the information back in exchange for a full pardon. Sounds easy, right? There's a catch: Snake only has 22 hours to do all this because by then the conference will be over and the world will be thrown into chaos. As an incentive he has two explosive charges lodged in his neck to keep him focused on the task at hand. With this enticing opening, the film kicks into high gear as Snake enters the world's most dangerous prison to find the president and save the world.

Carpenter had just made Dark Star (1974) and no one wanted to hire him as a director so he shifted his focus to screenwriting. Inspired by the Charles Bronson film Death Wish (1974), Carpenter originally wrote the screenplay in 1974. He didn’t agree with the film’s philosophy but liked how it conveyed “the sense of New York as a kind of jungle, and I wanted to make an SF film along these lines. He was also influenced by the Watergate scandal. "The whole feeling of the nation was one of real cynicism about the president. I wrote the screenplay and no studio wanted to make it" because the general feeling was that “It was too violent, too scary, too weird.” And so the director went on to do other films with the intention of making Escape later. After the successes of Halloween (1978) and The Fog (1980), Carpenter was in a position to make a motion picture with a big budget. He decided to revive his Escape script, but something seemed to be missing. "This was basically a straight action film. And at one point I realized it really doesn't have this kind of crazy humor that people from New York would expect to see." So, he brought in Nick Castle, a friend from his film school days at University of Southern California. Castle invented the Cabbie (Ernest Borgnine) character and came up with the film's humorous conclusion that offset the bleak tone of the film with a skewed sense of satire.

The film's setting proved to be another potential problem for Carpenter. It is apocalyptic in tone: a decaying, semi-destroyed version of New York. How could Carpenter create this world on only a budget of $6 million (his biggest at the time)? As fate would have it, in 1977 there was a big fire in St. Louis that burned out several blocks of the downtown area. Carpenter and his crew convinced the city to shut off the electricity to these blocks at night and then proceeded to transform the remains into a New York of the future. They even found an exact replica of Grand Central Station that was deserted and unused. It was a tough, demanding shoot that Carpenter had never experienced before. "We'd finish shooting at about 6 a.m. and I'd just be going to sleep at 7 when the sun would be coming up. I'd wake up around 5 or 6 p.m., depending on whether or not we had dailies, and by the time I got going the sun would be setting. So for about two and a half months I never saw daylight, which was really strange." This approach paid off, creating a dark, foreboding atmosphere of a futuristic film noir.

In addition, Carpenter shot parts of the film in Los Angeles and New York. He and his film company were the first ones ever to be allowed to shoot on Liberty Island, at the Statue of Liberty at night. They let Carpenter have free run of the entire island. He remembers, “We were lucky. It wasn’t easy to get that initial permission. They’d had a bombing three months earlier, and were worried about trouble.” With Escape, the director created two distinct looks: “one is the police state, high tech, lots of neon, a United States dominated by underground computers. That was easy to shoot compared to the Manhattan Island prison sequences, which had few lights, mainly torch lights, like feudal England.”

The heart of Escape From New York lies in its main character: Snake Plissken. His cynical, world-weary attitude flies in the face of the earnest authorities who send him off to the save the world. Snake could care less. All that matters to him is "the next 60 seconds," as Kurt Russell commented in an interview. "Living for exactly that next minute is all there is." It is this kind of intensity that makes Snake such an interesting 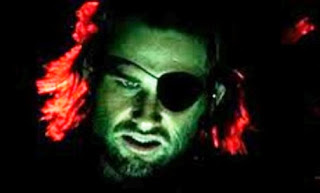 character. He is the ideal antihero — intent on getting the job done and content on being left alone. Snake doesn't need anyone. Russell's performance clearly echoes Clint Eastwood's style of acting — the strong, silent type. Snake is a clever hybrid of The Man With No Name and Dirty Harry. It is an amusing riff on Eastwood's two most famous characters, which is only reinforced by the appearance of Lee Van Cleef (who appeared in a few films opposite Eastwood). It is to Russell's credit that he makes Snake a character you want to root for, that you want to see win at the end. There is something charismatic about Snake that makes you automatically want to like him. What is so great about the character is that Carpenter and co-screenwriter Nick Castle remain true to him throughout. They don’t saddle him with a love interest or dilute his intensity by having him crack the occasional joke. Snake remains an unrepentant badass, the proverbial fly in the ointment with a surly disregard for authority right up to the last shot of the film.

And to think that the studio did not want Carpenter to cast Russell in the role. Up until then the actor had done a string of Disney films as a youth and worked with Carpenter on a TV movie about Elvis Presley. The studio did not see Russell as a tough action hero. In fact, Charles Bronson expressed an interest in playing Snake (Tommy Lee Jones also was considered). However, by Carpenter’s own admission, “I was afraid of working with him. He was a big star and I was this little-shit nobody.” Fortunately, the filmmaker had faith in Russell and Escape From New York continued a long-standing relationship between the two men — both personal and professional — that continues to this day.

Escape From New York also features a strong supporting cast of character actors such as veteran thespian Harry Dean Stanton as Brain, the smartest man in the prison, and Ernest Borgnine as Cabbie, a hack who stayed in New York even after it changed into a prison. Let’s not forget Adrienne Barbeau as the Brain’s girlfriend Maggie and yet she is anything but that, as the talented actress plays her character as the tough-minded female equivalent of Snake. The film contains an eccentric assortment of characters each of who get their moment to shine and this only enhances the enjoyment of watching Escape. One of the best things about it is how these characters interact with Snake and how he views them. The supporting cast also fleshes out more of this fascinating world. They continually offer all sorts of tantalizing tidbits that allude to Snake's colorful past, to conditions in the prison and how the inmates have created their own world.

Escape from New York received mostly positive reviews when it was released. Newsweek magazine felt that Carpenter had a “deeply ingrained B-movie sensibility — which is both his strength and limitation. He does clean work, but settles for too little. He uses Russell well, however.” Time magazine’s Richard Corliss wrote, “John Carpenter is offering this summer's moviegoers a rare opportunity: to escape from the air-conditioned torpor of ordinary entertainment into the hothouse humidity of their own paranoia. It's a trip worth taking.” In his review for The New York Times, Vincent Canby wrote, "[The film] is not to be analyzed too solemnly, though. It's a toughly told, very tall tale, one of the best escape (and escapist) movies of the season." However, the Chicago Reader’s Dave Kehr felt that the film, “fails to satisfy — it gives us too little of too much.”

First and foremost Escape From New York is a fast-paced action film that is never dull to watch. However, the film also contains a dark, satirical edge that never falters, even right up to the film's conclusion. One the most frustrating problems of most films is how they end. No one seems to know how to end a film without relying on tried and true clichés. Carpenter's film does not fall into this trap. Escape may be an action film but it also makes some very interesting comments about crime in the United States that are still relevant even today. One could argue that Carpenter's film is almost intended to be a warning. That if things get any worse, the world that is depicted in this film isn't that far off. It is these sobering thoughts that make Escape From New York as powerful and entertaining today as it was when it first hit the screens in 1981.

Comments:
Wonderful examination and celebration of this great John Carpenter film, J.D.! This one never gets old. Thanks for this.