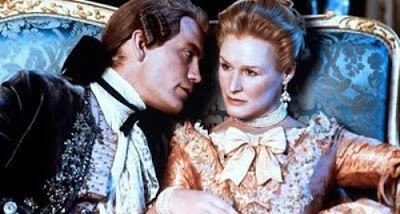 By Squish
I firmly believe that criticism, whether print media, television or the works of an online hobbyist such as myself, creates a better appreciation of the art one is writing about. The simple math of it makes a critic doubly involved in the same movie — watching followed by analyzing. And the fact that I've had to spend another two hours or more revisiting Dangerous Liaisons makes this task one of the most pleasant I've had in recent months.

What makes Dangerous Liaisons so exceptional is not the beautiful cinematography and attention to visual detail, it's not the spectacular performance of John Malkovich and Glenn Close...OK, wait, it is a lot of that, but what I'm trying to emphasize is this: Dangerous Liaisons is one of the most perfectly written scripts I've heard in my life, particularly as it relates to the relationship between Valmont and de Merteuil.

Their true relationship is one that must always remain a secret. In this still sexually strict age of 18th century France, these two bored aristocrats have the stern judgment of their peers to consider whenever they engage in the task of defiling others. This means that the option of gloating proud upon their successes in seduction 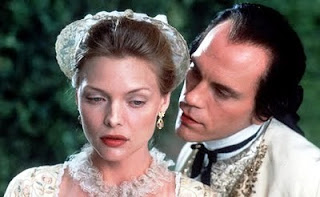 has truly no other audience apart from themselves. Accepting this fact, the two competitively consort, raising each other's bar of debauchery. When de Merteuil first suggests Valmont seduce the young and naive Cécile de Volanges (Uma Thurman), he instantly refuses declaring how beneath him that simple task would be. Nay, he raises his standard to a much more difficult task in order to win a truly glorious prize, the chaste Madame de Tourvel (Michelle Pfeiffer). And, since she needs his debauchery to be as base as hers lest she be alone, de Merteuil's promises her own sex to tempt him into considering her task. Ironically, these two are exquisitely bred and exceptionally skilled manipulators. Valmont and the Marquise Isabelle de Merteuil constantly keep the rigid decorum of the aristocracy even when speaking honestly with one another, yet never getting away from seeming like slathering jackals underneath it all.

Their victories only come from sexually debasing others, and it quite obviously makes for a lonely existence, and both of them maintain their games because they only have each other. The script is one of the best examples of how to properly provide exposition to the audience as there's ever been.

Still, no matter what I write, it's nothing compared to the multi-layered guise-within-a-guise that is Dangerous Liaisons. My praise goes out to Choderlos de Laclos for having written the original novel, to Christopher Hampton for the screenplay. It's rare that I go out of my way to see more of a writer's scripts, but I'm looking forward to exploring his other works, such as Atonement and The Quiet American.

One final thing: I was impressed with how some of the casting choices helped create a very satisfying nigh fourth-wall-breaking subtext. Close, here as the immoral and seductive Marquise Isabelle de Merteuil, has had previous important roles that included the freaky mom from The World According To Garp and the year just before Dangerous Liaisons, she showed how psychotic she could be with Fatal Attraction. Keanu Reeves and Uma Thurman, both in roles of true neophytes, when they themselves were relatively unknown actors, predating even Bill & Ted's Excellent Adventure, though his character in Dangerous Liaisons is made even better today by Keanu's stereotypical goof-off "whoa. I know Kung-Fu" persona that he still hasn't completely shaken off. A neat undercurrent if I do say so myself.