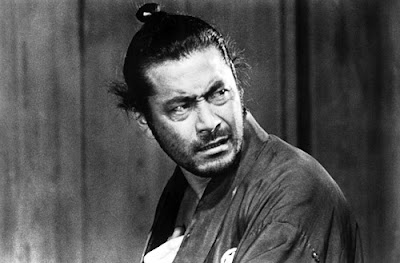 By Edward Copeland
The first time I ever saw Toshiro Mifune in a movie was when I was a child and my dad took me to see the World War II behemoth Midway "in Sensurround." I have little memory of my reaction to his portrayal of the Japanese admiral other than I knew he was on a ship with Arnold from Happy Days. Later, I'd see him again as another member of the WWII Japanese navy in Steven Spielberg's bloated comedy 1941. Eventually, I did see Mifune at his best, in his many collaborations with director Akira Kurosawa. Revisiting so many of those films in a short time span for today's centennial of Kurosawa's birth, I've truly come away amazed at Mifune's range and am asking myself, "Is Toshiro Mifune the greatest film actor of all time?"

As the thought crossed my mind at how underappreciated Mifune's versatility as an actor has been, it reminded me of another actor with a similar reputation who recently received his overdue Oscar reward for Crazy Heart, Jeff Bridges. As I checked Mifune's filmography, to see if by chance there were any other non-Kurosawas that I had seen Mifune in, of all things, the only other title turned out to be the underrated Jeff Bridges gem Winter Kills, though it's been a long time since I've seen it and I can't recall Mifune's role in it.

I wish I'd seen more of Mifune's non-Kurosawa work, if only to reassure myself that the director didn't have some special gift for bringing out the very best in Mifune, but I find that very hard to believe. The vast differences in the roles Mifune played for Kurosawa definitely indicate an actor of great talent, not merely a director who knew how to coax the best out of his performers.

It didn't matter if Mifune was in a period piece or a modern drama: He was always good and he was always different. He played many feudal warriors and samurais, but they were all distinct from one another. You don't confuse the heavily drinking scarred farmer turned samurai in Seven Samurai with the stoic, dry-witted cool operator in Yojimbo and Sanjuro. Of course, they aren't even closely related to his Japanese version of MacBeth in Throne of Blood or escaping general protecting a princess and fooling beggars in The Hidden Fortress.

That's not even to mention the distinction between the various thieves he played in film such as The Idiot, Rashomon and The Lower Depths. I haven't even mentioned his wise old doctor in Red Beard, since it's the only Kurosawa I couldn't finish, even though in what I watched of it he was quite good as well.

His modern roles were equally dissimilar from the frantic young detective trying to retrieve his stolen gun before it kills more innocent people in Stray Dog to the son of a man who committed suicide seeking revenge of the members of the corporation he holds responsible in The Bad Sleep Well to the shoe executive ready to buyout his company when kidnappers unexpectedly abduct his driver's son, believing it belongs to the executive in High and Low.

His skills, as is the case with most great actors, weren't limited to characterization or the way he used his voice, but extended to his body language, the way he'd rub his head or scratch his face, a bored yawn or, in a great bit in Sanjuro, the way he absent-mindedly traces a painted character on a wall with his finger as two ladies ramble about a peaceful plan to rescue an abducted official.

With outside events and limited time, I wasn't even able to do as thorough a review of Kurosawa's canon as I would have liked for today's centennial, but I so wish I could have explored Mifune's work in non-Kurosawa's work in other directors' films more thoroughly to see if my theory holds any water. It seems hard to declare that someone is the greatest screen actor of all time when I'm basing that judgment solely on working with a single director and there are so many other gifted performers who can make a worthy claim to that title, but I think it's worth a debate. Let the arguments begin.

Comments:
You should see him in the also underrated John Borman film, HELL IN THE PACIFIC. If I remember correctly, Mifune was also quite good in the tv miniseries of SHOGUN

And you didn't even get around to his performance in I Live in Fear where, aged 35, he played a man of 65 or so--and without today's makeup techniques but with his posture, facial expressions, body language, and that marvelous voice! I'm with you: He was the greatest!

Unfortunately, I haven't seen I Live in Fear, but it certainly sounds like something I should that would support my case.

I was debating the same thing today - was Toshiro Mifune the greatest actor ever, period?

Humphrey Bogart has always been my favorite, but I discovered Toshiro Mifune last year. I was really sick and TCM had an Akira Kurosawa festival.

The first film I watched was Stray Dog. I absolutely loved it. Then Rashomon and Drunken Angel. I've never seen an actor who could convey so much emotional power, but under his control. Today I watched The Bad Sleep Well and loved it.

I can't get enough of his movies.