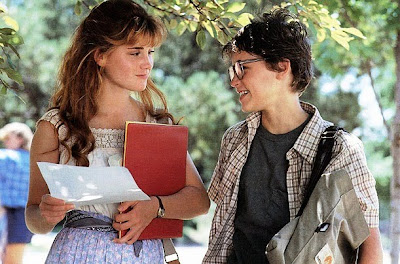 By John Cochrane
When Corey Haim died suddenly of pneumonia and cardiovascular complications on March 10 last year at the age of 38, a lot of people probably thought of him as a reality TV star — the latest Hollywood casualty of childhood fame, a career derailed by a lifetime of drug addiction and unreliable behavior. Other people possibly thought of his most famous film role as Sam, an adolescent vampire-killer in the movie The Lost Boys (1987). I immediately thought his unforgettable starring performance in the film Lucas (1986), a buried gem that I saw when it was released 25 years ago today. It remains one of the best movies I’ve ever seen about being a teenager and trying to navigate the often-painful processes of attending high school and falling into unrequited love. 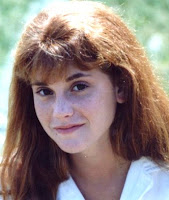 The story begins with Corey Haim as Lucas Bly, a 14-year-old accelerated high school student spending a late summer day wandering around town with a bike and a butterfly net, looking at insects. He comes across a new girl in town, Maggie — played by Kerri Green — who is hitting balls on a tennis court. Once they begin talking, we realize that we’re not watching a typical '80s movie about hip high school students in improbable circumstances, but a film about genuinely interesting people. Lucas is obviously very bright and articulate, but he’s also socially awkward and by the looks of his clothes and big glasses, an 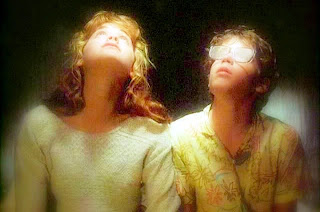 outcast. Maggie is a beautiful and shy 16-year-old with flowing red hair, and when she responds to Lucas with kindness and interest, he is immediately smitten. Their friendship develops over the rest of the summer, as the two have deep conversations about art and life — though Lucas is oddly evasive any time questions about his family come up. The film’s opening passages culminate with Lucas and Maggie exploring an underground sewer and listening to an outdoor classical music concert through a manhole. As they sit, back-to-back staring up into the light, Maggie is entranced by the music, and Lucas is entranced by her. The scene ends on a foreboding note though, with Lucas quietly dreading the beginning of the school year. 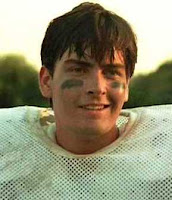 On campus, Lucas is not the confident master of his domain that he was during the summer, but a small and easy target for jocks and would be tormentors. The film’s depiction of high school and its inherent stress and social anxiety is timeless, and if you don’t experience some hint of recognition from your own high school past, maybe you weren’t really there. We meet some of his classmates, including Ben — a chubby tuba player and video camera enthusiast who’s not afraid to stand up to bullies, Cappie — a varsity 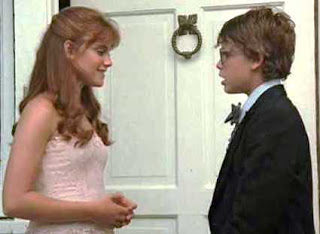 football star who cares about Lucas and tries to defend him from ridicule, and Rina — a quiet member of the marching band who has a crush on Lucas, and would probably be his girlfriend if he was older and wiser. Lucas suffers humiliations and tries to tightly hang on to his close friendship with Maggie, but she also wants to have fun and meet people. Lucas despises the high school cliques that so cruelly reject him, and when Maggie tells him that she wants to try out for the cheerleading squad, he accuses her of being superficial. When he shows up on her doorstep in an ill-fitting tuxedo to take her to the school dance, Cappie is already there. Cappie and Maggie invite Lucas to skip the dance and go for pizza with them, but reality becomes painfully clear. Lucas loves Maggie and idealizes her, but Maggie only cares for him as a good friend — one who follows her around like a lost puppy. Soon afterward, in a bold and potentially dangerous bid for attention, Lucas decides to try out for the football team.

If you think this sounds like a typical teenager movie with a predictable ending, it’s not. First-time director David Seltzer doesn’t use flashy filmmaking techniques or cheap jokes, but instead smartly places his emphasis on his own screenplay with its nature motifs of transformation and fragility. In doing so, he delicately captures situations, dialogue and emotions that are sometimes funny, sometimes embarrassing or sad, but always real. In his original 4-star review, film critic Roger Ebert praised the film as one of the five best of the year, saying that “half-a-dozen of the film’s scenes are done so well, they could make short films on their own,” and compared its portrait of adolescence to Francois Truffaut’s new wave classic The 400 Blows (1959). If you know both films, it’s a credible comparison. I would also add that you could watch Lucas with the sound down, and still understand the story. The visuals and performances are so strong, that it would still work as a silent movie.

The characters in Lucas are people that you know and recognize — sometimes clumsy, insecure or awkward, but likable and always trying to do the right thing. Nowhere is this more apparent than in the character of Lucas himself. Ebert said about Corey Haim’s performance:

“He does not give one of those cute little boy performances that get on your nerves. He creates one of the most three-dimensional, complicated, interesting characters of any age in any recent movie. If he can continue to act this well, he will never become a half-forgotten child star, but will continue to grow into an important actor. He is that good.” 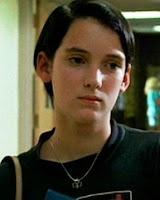 The other actors also seem not to perform their parts, as much as embody them. High praise should be given to Kerri Green, who first appeared in Richard Donner’s The Goonies (1985), but really shines here. Lucas would not work nearly as well if we didn’t think Maggie was worthy of Lucas’ total affection, and Green comes across as a genuine beauty both inside and out. (Truth be told, I had a teenage crush on her when I saw this movie, and it’s been reported that Haim did too during the film’s production — a believable possibility that only enhances their chemistry on screen.) Also memorable are Charlie Sheen as Cappie and Winona Ryder in her first on-screen role as Rina — both creating earnest, believable characters — free of clichés and before tabloid hysteria overtook their careers.

Both Lucas and The 400 Blows end with freeze frames of their lead characters. The last shot of The 400 Blows is one of the most famous endings in film — with Antoine Doinel escaping reform school, ending up at the beach and enigmatically regarding the camera with the ocean behind him. Lucas concludes with a shot of Lucas at his locker — the climax of a moving finale, which shows Lucas returning to school after an extended absence. Both characters are yearning for parental love and social acceptance. Both act out desperately to achieve it. Corey Haim’s life and career ended tragically and prematurely — sadly never fulfilling the promise that Ebert mentioned, but Lucas and Haim’s performance will be remembered by anyone who values great films and characters. The lasting image I have of Haim is not from The Two Coreys, but of the freeze frame of Lucas Bly — in his oversize jacket, smiling with his arms in the air.

Comments:
Kerri Greene was fine, but this movie started my cinematic crush on Winona Ryder.