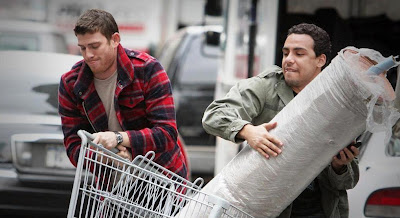 By Edward Copeland
In the opening scene of HBO's newest comedy How to Make It in America, which premieres Sunday night at 10 p.m. eastern, 9 p.m. central, a young New York entrepreneur tries to re-sell peanut M&Ms as he tells the captive passengers on the elevated train it's just a small step on his way to success. The new series takes all levels of that arduous journey as its focus as it examines an assortment of New Yorkers on various rungs of the social ladder with something to prove and dreams to achieve. Based on the first four episodes of the series' eight-episode first season, it's difficult to tell whether the show itself will similarly succeed as it's just finally starting to hit a groove as the preview episodes run out.

Bryan Greenberg and Victor Rasuk star as the series' ostensible leads Ben and Cam, two young New Yorkers who dream of finding their footing in the fashion industry. Ben pretty much has abandoned his dreams, content to work at Barney's and moon over his ex (Lake Bell, late of Boston Legal) while Cam still has the street hustler in him ready to take on "The Man" to become "The Man." Unfortunately, it takes money to make money, especially when you're living in a city with the cost of living of New York. Complicating the friends' plan is the release from prison of Cam's loan shark cousin Rene (the great Luis Guzman), whom the pair already owes $5,000. Rene has dreams of his own, namely becoming a high-energy drink king by taking on the NY franchise of a new product, though it's difficult to change his old business habits.

Some of their circle of friends have smaller dreams to achieve. David Kaplan (Eddie Kaye Thomas, best known for American Pie) is a hedge fund manager on his way to master of the universe status but his immediate goal is seeing if his high school friend Ben has enough pull to get him past the doorman at an exclusive Manhattan nightclub.

One of the executive producers for How to Make It in America is Mark Wahlberg, who brought Entourage to HBO. While I never warmed to Entourage, the new series shows some potential, despite a slow start. If the characters really want to make it, they might look into television. I've never seen credits such as the ones on How to Make It in America. There are seven credited actors but listed in the same size and font and each with their own screen are five executive producers, one co-executive producer, two producers and a casting director. The poor creator, Ian Edelman, gets a slightly smaller credit of his own.

Viewing the first four episodes, a lot of what transpires feels like exposition and while it produces sporadic laughs, it all seems like setup. Knowing that only four episodes remain in the premiere season, I have to wonder how far the story can go before the season is over. Most of the cast is likable, especially Greenberg and Masuk, but some of the main characters such as Scott "Kid Cudi" Mescudi's Domingo and Shannyn Sossamon's Gingy still aren't clearly drawn by the end of the first four episodes.

One actress who is not a regular and only appears in the third and fourth episodes though makes a quick and devastating impression and that is Martha Plimpton as Rachel's boss Edie Weitz in a interior design business. When Rachel feels as if she's wasting her life after visiting an old friend who has been helping in Africa with the HIV epidemic, Edie sets her straight. Anyone can find awful places to help in Africa, "We're saving this city 300 square feet at a time. We are design superstars." When Plimpton's on screen, her creation of Edie is so great that everyone else vanishes in her wake.

Whether any of the other wannabes will achieve superstar status is anyone's guess, but the How to Make It in America certainly shows potential, even if it's nowhere near the level of the great comedies of HBO's past.

Comments:
Yeah, I didn't get into Entourage either, but it has been highly recommended to me. Thing is, if I've got time I'll give anything HBO produces a chance, they normally make damn fine TV series, The Sopranos, The Wire, i don't think i need to go on