…and now for something completely different 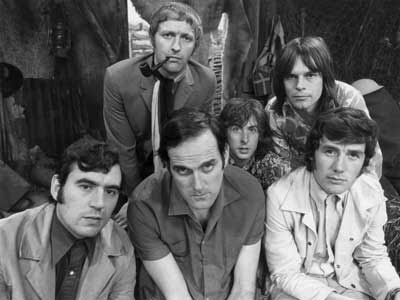 By Ivan G. Shreve, Jr.
The scene begins as a group of men and women are seated in an area near the counter of a pharmacy — or “chemist’s”, as they’re called in the U.K. There is a sign on the counter that reads “Dispensing Department” and a cheerful employee enters…

The sketch is interrupted by an individual, apparently representing the British Broadcasting Corporation, who apologizes for the “poor quality of the writing in that sketch” by displaying a series of words on projector slides that he promises will “not be used again on this programme”: B*M, B*TTY, P*X, KN*CKERS, W**-W** and SEMPRINI. A woman enters the shot and asks innocently: “Semprini?” The BBC official demands she leave at once, and for the rest of the show anyone uttering this word is quickly hustled offstage by a uniformed policeman.

This was my introduction to a classic television show that debuted on this date 40 years ago: Monty Python’s Flying Circus.

How did a sketch comedy program that Python member Michael Palin once described as only being watched by “insomniacs and burglars” become a pop culture phenomenon so huge that it added a new word to the dictionary — “Pythonesque” — to describe its unusual brand of anarchic, surreal humor? The success of Circus can be attributed to many factors, but chiefly among them were the six individuals responsible for writing and performing in the series: Palin, Graham Chapman, John Cleese, Eric Idle, Terry Jones and animator Terry Gilliam (the only Yank in the bunch). At the time of Circus’ debut, these men were prepared to take risks in the tradition of Beyond the Fringe and the Peter Cook-Dudley Moore series Not Only...But Also, frequently writing sketches in free-form fashion that eschewed the time-honored tradition of endings and punch lines (something they gleaned from Goon Show alumnus Spike Milligan and his comedy series Q5) and taking advantage of the show’s late scheduling to engage in any kind of silliness that tickled their collective fancies. But the educational background of many of the members in Python — Chapman, Cleese and Idle attended Cambridge; Jones and Palin were Oxford grads (collectively they referred to themselves as “Oxbridge”) — was frequently showcased in their sketches, with historical figures like Mozart, Trotsky, Lenin, Attila the Hun and Genghis Khan often made the butt of the jokes. There was also a slight political tinge to the proceedings, with the six Pythons gleefully sending up and lampooning authority figures (politicians, policemen) and other idiosyncratic facets of British life.

At the time Circus was putting up its tent, only John Cleese could be called the instantly recognizable member of the embryonic comedy troupe; in addition to writing for television comedian David Frost, he also appeared in sketches of Frost’s various series, notably The Frost Report. Chapman had worked with Cleese as both a writing partner and performer on a scarcely-seen sketch comedy called At Last the 1948 Show (which also featured an up-and-comer named Marty Feldman). Gilliam, Idle, Jones and Palin made each other’s acquaintances on the cult series Do Not Adjust Your Set, with Gilliam creating animated “links” for the series and the other three writing and performing. The BBC’s idea was to put both Cleese and Palin in a series — executives stressed that the word “circus” had to be in the title — but under the tutelage of writer-producer Barry Took (who at one point could have been the namesake of a series called Baron von Took’s Flying Circus) the others were asked to participate as well. The troupe kept the “Flying Circus” part of the title but decided to add “Monty Python” because it sounded like a disreputable agent in show business. (If the Beeb had not been so insistent on the “Circus” title, it’s possible that I could be writing right now about Whither Canada? or Owl Stretching Time — two of the many alternate appellations for the show that engaged the Pythons in spirited debate.)

Though the Pythons themselves took on the various characters played on the series — both male and female — there were a few other performers who appeared on Circus from time to time. The most famous of these was Carol Cleveland, who was usually cast as beautiful women with bodacious ta-ta’s, since the females played by the Python troupe had a tendency to be loud, shrill and unattractive ladies that the members referred to as “pepperpots.” Other regulars included Connie Booth (who was Cleese’s wife at the time — she would later team up with her husband to write and appear in one of the classic Britcoms, Fawlty Towers), Ian McNaughton (the show’s director), Neil Innes and the Fred Tomlinson Singers — who were used when a musical number needed performed. The Pythons also created some memorable characters who, unlike today’s Saturday Night Live, were used sparingly so as not to wear out their welcome. They included Graham Chapman’s bristling Army colonel (who would interrupt sketches that he felt were getting “too silly”); Terry Jones’ naked, smirking organist (also played by Terry Gilliam in the early episodes), Michael Palin’s “It’s” man, who was featured in the opening of many episodes — a hirsute hermit with torn, ragged clothing who just barely managed to get out the word “it’s” before being cut off by Gilliam’s animated credits and John Philip Sousa’s The Liberty Bell, the show’s theme song; and the Gumbys — the male counterpart to the Pepperpots; a group of mustachioed men wearing wire rim glasses, handkerchiefs on their head and gum boots. Cleese also created a dapper, tuxedo-wearing BBC continuity announcer that would often keep the show moving along with his pronouncement: “And now for something completely different…” — which served as the title for the troupe’s first feature film (a compilation of sketches from the first and second series) in 1971.

By the second series, Flying Circus had become such a cult favorite that members of the public would scramble to get hard-to-acquire tickets to attend tapings (a far cry from the early days, in which the audience would be made up of the same type of Women’s Institute members shown applauding in stock footage, another of Circus’ running gags) and the show was given the green light for a third go-round as well. It was then that writer-performer Cleese became disgruntled with Circus; it wasn’t that he didn’t enjoy performing with the other members of the troupe, it’s just that he felt they were repeating themselves in many of Series 3’s sketches. Cleese, who once described himself in an interview as having “a low threshold of boredom,” was also annoyed because he had become the most recognizable of the six-member group in the eyes of the public…due in large part to one of the show’s classic sketches in which he played a government bureaucrat who worked in “The Ministry of Silly Walks.” (Anyone familiar with this bit knows that the physical comedy demonstrated by Cleese is simply falling-down funny — but when constantly asked by people on the street to “do the silly walk” it quickly loses its novelty.) Cleese opted out of doing a fourth series, so the remaining members finished out Circus’ run with a truncated run of six episodes (also shortening the show’s title to Monty Python) that gave writing credits to the departing Cleese for some sketches they used that had been cut from their second feature film, the cult classic Monty Python and the Holy Grail (1974). On Dec. 5, 1974, it mattered very little as to what the series was called; BBC-2 aired the final episode, cementing the show’s place in television history.

That same year, with the success of bringing series like Upstairs, Downstairs to American audiences, the BBC arranged for the 39 Flying Circus repeats to be syndicated to PBS stations throughout the U.S. (they were first shown on Dallas’ KERA-TV). The six installments of the fourth series were purchased by ABC and featured on the network’s late-night Wide World of Entertainment program…but unfortunately the episodes were so heavily edited and censored viewers couldn’t make heads or tails of them — and the presentation of the shows infuriated the Pythons, who took steps to settle the matter through the justice system in a landmark case that ultimately granted them the right to control all subsequent U.S. broadcasts…and also allowed them to gain the rights to the programs from the BBC when their contracts with the network expired in 1980. (A little-known fact is that the Beeb originally had planned to “wipe” [erase] the original Circus videotapes in a cost-cutting measure that has since robbed TV historians to see some valuable British programs — the early episodes of the groundbreaking Till Death Us Do Part, for example. Someone working at the BBC tipped off the Pythons, who were able to sneak the tapes out and make copies for their own collection…until the emerging popularity of the series convinced the Beeb to change their plans.)

Since the end of the original Flying Circus transmissions, the remaining members of Python (Graham Chapman passed away in 1989) have gone on to both successful individual projects, reuniting on occasion for feature films like Life of Brian (1979), Monty Python Live at the Hollywood Bowl (1982) and The Meaning of Life (1983). All of these films are lofty testaments to the team’s success and talent, but I fervently believe that the original television series remains their crowning glory. One of the first major DVD box set purchases I made after acquiring a DVD player was The Complete Monty Python’s Flying Circus — a collection that was so pricey (even though I bought it at a substantial discount) I first had difficulty justifying its presence in my library. But I know that if I have a particularly shitty day, I can always pop one of the discs in the player…and as soon as I hear that rousing Sousa theme, my cares and worries have been wiped away. (Know what I mean, squire? Nudge nudge, wink wink?)

Ivan G. Shreve, Jr. blogs at Thrilling Days of Yesteryear, and continues to maintain that had he not been exposed to Monty Python’s Flying Circus as a kid he might have turned out to be a normal, productive member of society.