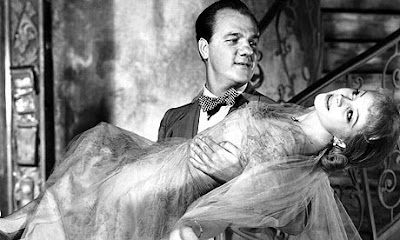 In the flood of recent celebrity passings, one would wish that TV would grant an appropriate amount of time to noting the career of Oscar winner Karl Malden, who died today at 97. Certainly he's been in the public eye a lot longer than others. He may not have set records like others did, but I guess your death only deserves real notice if you managed to become tabloid fodder in your lifetime first. Malden didn't have that foresight. He just did his job and did it damn well, working up until the year 2000 and making public appearances well past that.

Malden made his Broadway debut in 1937 in the original production of Golden Boy. While his film career began in 1940, he continued to appear on Broadway until 1957, including the original productions of Key Largo, All My Sons, The Desperate Hours and, of course, A Streetcar Named Desire. Amazingly, he never earned a Tony nomination.

His first notable film came with 1947's Kiss of Death. Though occasionally he got to show a darker side, he usually was the on the side of right such as the police commander in Otto Preminger's Where the Sidewalk Ends. In 1951, he got to repeat his Broadway role as Mitch in A Streetcar Named Desire and was given the Oscar for his performance.

He worked with Hitchcock in 1953's I Confess! In 1954, he reunited with director Elia Kazan and co-star Marlon Brando playing Father Barry and earning a second Oscar nomination in On the Waterfront. Kazan and Tennessee Williams brought out his darker side in 1956 when he played the oddly overprotective husband in Baby Doll.

Brando brought him along when he directed his Western One-Eyed Jacks. He played the no-nonsense warden in Birdman of Alcatraz the same year he was part of the all-star cast of How the West was Won. That same year, he even went musical, playing Herbie in the film version of Gypsy.

He usually dealt the cards in Norman Jewison's The Cincinnati Kid. While George C. Scott steamrolled over the screen as Patton, Malden was at his side as Gen. Omar Bradley.

As the 1970s came in, Malden found most of his work on television (aside from disaster flicks such as Beyond the Poseidon Adventure and Meteor). He had a successful run as Detective Lt. Mike Stone, originally opposite Michael Douglas, on The Streets of San Francisco, which earned him four consecutive Emmy nominations.

One of my favorite TV roles of Malden's was one which won him an Emmy as the father in-law in the miniseries Fatal Vision, who at first defends his son-in-law in the murders of his daughter and grandchildren before coming to believe him guilty.

Of course, for many his most famous role will come from a TV commercial as American Express pitchman in the 1970s with the famous tagline, "Don't leave home without it."

His last screen appearance, appropriate given the large numbers of roles where he played members of the clergy, was as a minister on The West Wing in 2000. He also served once as the president of the Academy of Motion Picture Arts and Sciences.

He did achieve one record that few ever accomplish: He was married to the same woman for 70 years. RIP Mr. Malden.