All Around the World 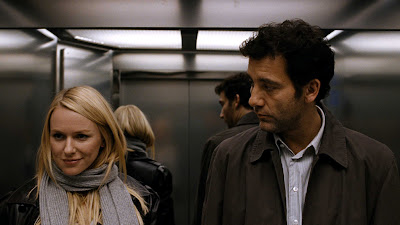 By Jonathan Pacheco
Apparently, I'm a bit of a Tom Tykwer fan and never knew it. His name sounded familiar to me, and it was only when I looked up his credentials that I realized why: he's made some darn good films. The director is responsible for the uber-hip Run Lola Run, The Princess and the Warrior, Heaven (a part of Kieslowski's final, somewhat posthumous trilogy), and most importantly to me, Perfume: The Story of a Murderer. Tykwer has a little bit of an identity as a certain type of filmmaker, so I was a bit surprised to see him taking on a film, The International, that at first glance is much more mainstream — a thriller about an Interpol agent, Salinger (Clive Owen), and an American Assistant District Attorney, Eleanor (Naomi Watts), investigating the corruption of a major international bank.

I really have to take a moment and highlight the cinematography of this film. Like a lot of the best camera and lighting work, the cinematography of Frank Griebe (who also shot the gorgeous Perfume) blends into the theme of The International, only revealing itself as truly outstanding when you take a moment to reflect on it. The muted colors, mostly blues, whites, and shades of grey, fit perfectly into the world of banks, Interpol, and corporate conspiracy. Many of the shots were backlit by bright, overexposed sunshine bursting through giant glass corporate windows, creating semi-silhouettes out of each character. There were also a few moving shots that surprised me in their duration and direction. If you think of your typical TV show such as Fringe or CSI, you’ll notice that they contain dozens of aerial establishing shots of major downtown areas. The camera flies over Boston or Las Vegas for all of two seconds, and then we cut to the scene down below. The shots are basic, possibly stock, and really have no punch or zip. I noticed a few times that The International took this idea and went just a little bit further. In one instance, it took the same idea, using those “generic” helicopter shots, but instead of cutting once it establishes the location, it keeps moving, passing over the tallest building, tilting down to reveal action behind it, below on the streets.

It establishes a general setting (the city), but rather than settling for that, it moves beyond the typical shot and reveals action behind what you thought was important. This could be taken as a sort of metaphor for the film (moving beyond the big shiny high-rise to reveal the reality behind it), but I think it mainly stems from a love of architecture, either from the cinematographer or the director. There are many "beauty shots" of buildings, a pivotal sequence takes place in the spiraling Guggenheim, and, in one of my favorite shots of the film, we are treated to an overhead view of a political rally gone wrong. When an attack takes place at an Italian plaza, we get a rather symmetrical bird’s-eye shot of the stage and surrounding area, almost as if we’re looking at a blueprint while hundreds of tiny people dash in every direction. 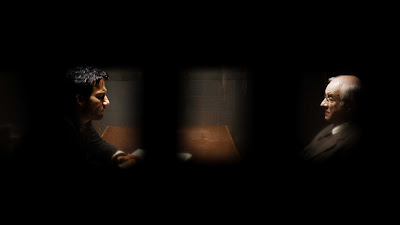 All of these can seem like relatively insignificant and minor tweaks to a cinematography scheme that we seem to know so well, but that’s the point; tweaks here and changes there can create such a satisfyingly fresh visual experience without having to be I Am Cuba or Watchmen.

But a film shall not live on cinematography alone. While I won't pretend to know anything about international banks beyond what this film spoon-fed me, I could see that the story that resides underneath the visual surface isn't airtight, nor is the story-telling, as seemingly important developments, tangents, and theories are abandoned in favor of shiny new plot turns. While it sounds frustrating, it's not something I noticed until after the film was over, finding myself thinking, "Hey, what ever happened to that one thing? They never explored that...."

In a way, it's as if the writer, Eric Singer, had a few scenes and lines that he knew he wanted in the final product, regardless if they fit. That's the only reason I can think that an investigative thriller would turn into a straight shoot-'em-up just for one long sequence. Or why every once in a while, in the middle of a very natural conversation, a character will rattle off a line that sounds like it came from an inspirational poster. The character of Eleanor is almost exclusively compromised of these scripted lines, relegating the talented Watts to uttering dialogue like, "We just had a major breakthrough in the case!" and "Let's make sure he didn't die in vain...." Not all is as cliched as it sounds, though. The film makes some very smart choices, such as underplaying the connection that Eleanor and Salinger have. At times, it was a bit refreshing, really.

The point is that The International is engaging, if in ways that are slightly different than what you've come to expect, and even if it's not a film that will linger with me for very long. Tykwer has done greater work, but he's not too shabby here either.

Comments:
Tykwer is great. I was extremely impressed with how good Perfume turned out, I had heard stories of it being a real mess. It's too bad that the International isn't getting good reviews, I haven't had a chance to see it yet, but hopefully it will deliver on some fronts.

Mattson, I think as somewhat of a Tykwer fan, that you should at least check it out when you get the chance. Again, it's not his strongest stuff, but I still found it enjoyable, even for the subtle touches that he brings to such a genre.