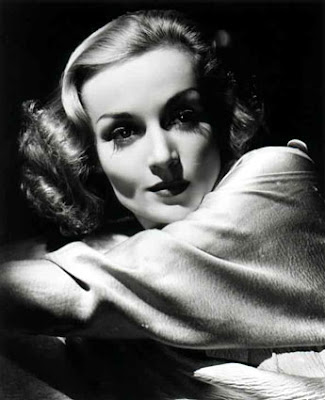 By Josh R
So well-enshrined is Carole Lombard’s reputation as one of the funniest women ever to appear in films that it is easy to forget she was also one of the most beautiful. With vaulted cheekbones made for catching shadows, pencil-thin eyebrows and shimmering white-blonde hair, she photographed as divinely as either Garbo or Dietrich – in publicity stills, she was every inch the goddess.

It is yet another example of the great and delicious paradox of human genetics (or, if you prefer, testament to the notion that The Almighty is not without sense of humor) that such pristine features should be assigned to someone with the freewheeling, improprietous imagination of a hyperactive class clown, born to exasperate the teacher and foster a spirit of anarchy in the schoolroom. In spite of Hollywood’s drab insistence that external appearance reflect character and personality, as if by some cosmic prank a dirty-minded satyr had wound up with the face of an angel. Lombard was never insensible to the ridiculousness of the situation, and in film after film, she ran with it. If the whacked-out universe of screwball comedy was the domain in which she felt most herself, what else was there to do but treat her beauty as the ultimate joke? It was almost as funny, if just as improbable, that such a rare bird would be given so prosaic a birth name as Jane Alice Peters.

The general axiom in show business has always been that broad physical comedy — making faces, taking pratfalls, etc. — is the province of those who can’t get by on looks alone. The Bert Lahrs, Fanny Brices and Carol Burnetts go in for exaggerated characterization, accompanied by a lot of mugging, because that’s their way into an audience’s heart. If they were knockouts, all they’d have to do is stand there and look gorgeous — simply put, if you have the looks, you don’t have to sweat. If that was really ever the case, then Carole Lombard never got the brief — and even if she had, she may well have crumpled it up and tossed it in the trash before the message had had the chance to make a dent in her consciousness. Other comediennes of the 1930s could be just as funny, but never with the same degree of unflagging manic energy or off-the-wall outrageousness as the woman dubbed The Daffy Duse of Comedy. Katharine Hepburn, Claudette Colbert, Rosalind Russell and Jean Arthur played similar roles, but they did it without bouncing off the furniture, squawking and squealing like deranged pigeons fighting over breadcrumbs, or generally carrying on like they’d just been sprung from the nuthouse. Pauline Kael summed up the singular performance style of Lombard best: “She threw herself into her scenes in a much more physical sense than the other women did, and her all-outness seemed spontaneously giddy. It was easy to believe that a woman who moved like that and screamed and hollered with such abandon was a natural, uninhibited cutup — naturally high-spirited.”

The riddle of Lombard’s onscreen persona — exactly how such a pretty girl could comport herself with such unbridled lack of decorum — only begins to make sense when you take into account who she was when the cameras stopped rolling. As both an actress and an individual, Lombard was blissfully unencumbered by anything ressembling a filter. She pretty much said and did whatever sprang to mind, without stopping to consider whether or not it was proper, polite or even within the bounds of good taste. The most famous quote ever attributed to her is nothing she ever said on onscreen, but a rather a comment she made about her second husband, Clark Gable: “My God, you know I love Pappy, but I can’t say he’s a hell of a lay.” Her on-set antics were as infamous as they were novel. When Fredric March began making aggressive advances towards her on the set of Nothing Sacred, she dealt with the situation by drawing him into her dressing room for a what he presumed would be a moment of passion. The actor stormed out a minute later with a stricken look of shock upon his face, after his co-star had lifted up her skirts to reveal a prosthetic appendage obtained from a novelty store of questionable reputation (the prop was, in every respect, at odds with the gender of the person wearing it). Her lack of tact reverberated in ways probably never even intended, and laid the groundwork for at least one of Hollywood’s great inside jokes. The actress’ most significant contribution to history of motion pictures came by virtue of a film in which she never even appeared, nor was in any way directly involved with; it was she who spilled the beans to Orson Welles about William Randolph Hearst’s pet name for a certain part of his lady love Marion Davies’ anatomy — “Rosebud.”

As entertaining as the lore surrounding Lombard’s private life is, it doesn’t match the value of her public works — namely, what she accomplished onscreen. She probably appeared in more great comedies of the era than anyone save for Cary Grant, and her best films haven’t lost a fraction of their appeal with the passage of time. I fully intended to revisit some her best-known flicks before writing this piece — unfortunately, an unyielding schedule has prevented me from doing so (when my ship comes in, I’ll cease to work and watch movies all day). Still, there are moments which stand out with such immediate clarity they require no reinforcement: on her back in silk pajamas, flailing her legs in the air to fend off a wild-eyed John Barrymore in Twentieth Century; explaining the pointlessness of scavenger hunts to William Powell in breathless, stream-of-consciousness fashion in My Man Godfrey; being repeatedly pushed down onto her deathbed in Nothing Sacred and popping up each time like a red-faced jack-in-the-box; feigning ecstasy after locking lips with a Nazi in To Be or Not to Be and offering up a ridiculously rhapsodic fascist salute in tribute to his kissing skills. There were other, lesser comedies in which she was just as delightful — particularly Hitchcock’s Mr. & Mrs. Smith and Leisen’s Hands Across the Table — while a handful of dramas did manage to catch some of her spark. Serious, straight-forward roles failed to engage her impudent sense of mischief; before finding her calling in farce, she more often than not seemed bored by the earnest ingenue or suffering lady roles she was required to play. It’s worth noting that, as a great beauty, she wasn’t really allowed to be funny for several years after she’d already achieved stardom; after so many bland roles in so many bland films, she was probably given to wonder why she’d been cursed with so striking a countenance. Her prettiness became the punchline once she’d figured out exactly what her true gifts were, and where they could be best applied.

It is one of the sadder ironies in Hollywood history that so celebrated a comedienne should meet with an end so tragic in nature — Carole Lombard died in a plane crash during a war bond tour a few months shy of her 35th birthday. She left behind a devestated Gable and legions of grief-stricken fans, none of who seemed able to comprehend how so mirthful a presence could be taken away in seemingly so cruel a fashion. For those who loved her — and those who love her work — her legacy of laughter and high spirits remains undiminished by the circumstances surrounding her death. Lombard’s genius lay in the fact that she never set limits for herself, or sought to put a cap on the mayhem she so enjoyed being at the center of; she seemed only too happy to go off the deep end when something struck her as being as funny. That fearlessness, along with the peerless ingenuity with which she was able to wring laughs from even the flimsiest of setups, provide an infinite source of pleasure to anyone and everyone who has or will sample her work. Ultimately, it was her talent that was the true thing of beauty.

Comments:
I love Stanwyck and I love Hepburn, but I downright worship Lombard. This was a great tribute.