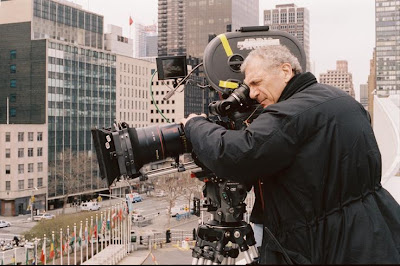 By Edward Copeland
Under normal circumstances, I would have had this appreciation up a long time ago, but if you knew the horrors of my life currently, it's a minor miracle that I snagged access to a computer at all today (This is my first time online since May 5, but more on my plight at a later date). Still, I'm glad fate allowed me, even somewhat belatedly, to pay tribute to the great actor-director-producer Sydney Pollack who has died of pancreatic cancer at 73.

However, I really will miss Pollack most for his solid work as a character actor: in Tootsie, as Judy Davis' ex-husband in Woody Allen's Husbands and Wives; last year's Michael Clayton; Stanley Kubrick's Eyes Wide Shut; a funny cameo in Death Becomes Her; and, in one of his best turns, ironically playing a jailed oncologist in the "Stage Five" episode of The Sopranos' final season.