Not Much Bark, Even Less Bite 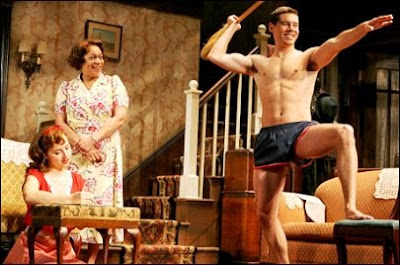 By Josh R
Posterity is not always a particularly kind mistress, and any reputation based on first impressions may turn out to be built on a foundation made of sand. For those doubting the extent to which the process of erosion can wreak havoc on a playwright’s legacy, it must therefore be asserted that there was a time when William Inge, the Pulitzer Prize-winning author of Picnic, Bus Stop and The Dark at the Top of the Stairs, was considered the equal of Tennessee Williams and Arthur Miller. Needless to say, the moment was short-lived; by the late 1960s, Inge had been widely written off as a minor talent, and by the time of his death, had seen his reputation downgraded almost to the point of obscurity. If it seems difficult to account for such a stunning reversal of fortune — for surely no American playwright has fallen so far in the estimation of theater critics and scholars, relative to where he began — one need look no further than the plays themselves. For starters, there is Come Back, Little Sheba, the 1950 domestic drama that put Inge on the map and has recently been revived on Broadway by Manhattan Theatre Club.

It’s not hard to see why Come Back, Little Sheba would be warmly received by critics of the post-war era; it is, first and foremost, a well-made play that deals with serious issues in a sensitive and realistic fashion. There is nothing pretentious or overreaching about it — it knows exactly where it’s going and how to get there, and even if it never soars it seldom ever stalls. In that respect, it’s sort of like your first car — if not the ride of your dreams, then the one that served its function reasonably well in the absence of a better option, and got you where you needed to go if providing few thrills in the process. The title of the play refers to the beloved pet canine belonging to one Mrs. Lola Delaney, the lovably disheveled, rather simple-minded housewife played to near-perfection by stage and television veteran S. Epatha Merkerson. As the title suggests, the puppy has made like a pigeon and flown the coop — which is not surprising given how cumbersome it must be have been for one small dog to bear the full weight of the heavy symbolism foisted upon her by the playwright (Little Sheba’s absence represents Lola’s lost youth and the death of idealism, among other things). The good news for pet and/or Inge lovers alike is that, after an absence of nearly 60 years, Little Sheba has indeed come back to Broadway and the owner who loves her. The bad news for theatergoers is that she’s looking a bit the worse for wear. Even if this pooch still shows some faint signs of life, she arrives on the stage of The Biltmore Theatre practically wheezing.

Now I, for one, have never had any moral qualms about the practice of putting ailing animals to sleep if prolonging their lives constitutes inhumane treatment. Little Sheba’s condition hasn’t worsened to the point that it cries out for euthanizing — still, it seems a bit cruel to ask her to jump through hoops to give audiences the false impression of witnessing something interesting, relevant and fresh. Moreover, it is worth wondering why exactly Manhattan Theatre Club, a company which has built its reputation on the presentation of new works — including Proof, Doubt and Rabbit Hole, three of the last five Pulitzer Prize winners — has chosen to dredge such a moldy old chestnut out of the mothballs when there are so many infinitely more worthwhile plays to revisit (Caryl Churchill’s Top Girls, MTC’s announced spring production, seems a much more adventurous and, consequently, appropriate choice). There are plays from the '50s and earlier which still have the ability to sing; this one can barely woof.

Enough about the dog. Little Sheba is, of course, not the central character of Inge’s play — she is but a metaphor for the extent to which the boat has sailed for her downtrodden keepers. Slovenly hausfrau Lola’s world revolves around her husband Doc, a recovering alcoholic played by Kevin Anderson with a forced cheerfulness that does suggest someone diligently endeavoring to keep despair at bay. The impetus for the marriage was Lola’s pregnancy; Doc had to give up his medical studies, and by extension his lifelong dream of becoming a doctor, in order to support her. Now working as a chiropractor, he tries not to acknowledge the extent to which he blames Lola for his missed opportunities; she, in turn, is achingly aware of his unspoken recrimination but tries to convince herself that nothing is broken which can’t be mended — just as she persists in thinking that blasted dog is gonna turn up. The disruptive presence of Marie, a young female boarder, upsets the delicate balancing act by which tensions are kept in check, and Doc falls off the wagon in spectacular fashion. The play ends on a hopeful note, but concludes, as voiced by its heroine, that Little Sheba is pretty much gone for good.

If the plot sounds a bit like something out of a movie-of-the-week, that more or less how it plays — everything is spelled out in capital letters, and with a minimum of subtlety. With its simplistic attitudes, helplessly stilted dialogue, labored central metaphor, paper-thin psychology and the numbing functionality of its devices (when the doorbell rings, it’s always on cue), Inge’s work is mechanical to the point that it feels almost like a blueprint for a play instead the real deal. To say it’s dated would be an understatement; you keep waiting for someone to say something along the lines of “Gee whiz, that’s swell!” — which they usually do, at regular intervals and without a trace of irony. While Michael Pressman’s production has been termed a revival, given the state of the play, it might be more accurately referred to as an excavation. Back in 1950, this kind of thing might have been perceived thought-provoking and insightful; from a modern standpoint, it’s hard to tell what the original effect might have been just by viewing the fossils.

If my tone seems unnecessarily harsh, it’s a reflection of the fact that I rarely leave a Broadway show wondering what, exactly, it happens to be doing on Broadway (even the uninspired Young Frankenstein has arrived with a clearly discernible purpose — to make money). Come Back, Little Sheba is not a classic, nor, like the lesser plays of Miller or Williams, does it have enough substance or complexity to lend itself to any kind of reinterpretation. If you can’t uncover some new wrinkle in the text, or approach it from a different standpoint, then why bring it back when it’s not a particularly play good to begin with?

The answer to that query may be found, to some degree, in the performances; the play is remembered primarily as an actor’s showcase, and Ms. Merkerson’s fine, nuanced performance succeeds, against very stiff odds, in making a case for it on that level. The role’s originator, Shirley Booth, was showered with praise for her Tony-winning turn as Lola; she reprised the role for the 1952 film version, and was rewarded with an Oscar. Although her performance as an “ordinary” housewife featured many touching moments, it was a bit too much of a tour-de-force to be entirely credible (and there are many, like our own Odienator, who find her fussiness grating in the extreme.) Ms. Merkerson, making her first Broadway appearance since her Tony-nominated stint in August Wilson’s The Piano Lesson some 18 years ago, wisely elects for a less showy approach; she seems at once less self-preoccupied than Ms. Booth did, and entirely true to life. The delicacy and restraint that characterize her work makes much more sense from a dramatic standpoint; there is a sweetness and modesty, tinged with subtle shades of sadness and regret, that explain why, in spite of his resentment toward her, Doc genuinely loves and needs Lola, as well as why she is able to endear herself to others in their midst. The most touching moments in the production are those in which Ms. Merkerson reacts to the random acts of kindness paid to her by strangers; she is less a woman consumed by her own inner life than one wanting and needing to reach out to others.

Unfortunately, she also is the only person onstage whose efforts aren’t defeated by the limitations of the text. Mr. Anderson gives a very intelligent, finely judged performance, but can’t find ways (as Ms. Merkerson does) of delivering his painfully stilted lines in a way that sounds natural. This is not really the actor’s fault, since he's saddled with what is by far the more awkwardly written character of the two; Inge insists that Doc is a smart man, but he doesn’t provide him with smart things to say. As Marie, the cutie-pie coed who inadvertently sends her landlords’ marriage into a state of crisis, Zoe Kazan delivers all of her lines in a high-pitched sort of baby talk that is meant to suggest winsomeness — instead she winds up sounding like a more animated version of Melanie Griffith. Brian J. Smith overdoes the boorishness of the musclebound jock vying for Marie’s affections, while the majority of the other supporting cast members simply fade into the background. A notable exception is Brenda Wehle, who seems to enjoy herself playing an ethnic type as a harried neighbor, even if she’s not really any more believable than any of the other featured players, all of whom seem to be rolling in and out of view like comically exaggerated stock figures in a '30s screwball comedy.

The casting and/or direction of Kazan and Smith notwithstanding, it’s hard to lay the blame for Come Back, Little Sheba's failure at the feet of director Michael Pressman, who exhibits a sure sense of staging and resists the temptation to take the play’s more melodramatic moments over the top. Great directors have been known to mine lesser material for gold; recent Broadway productions of Company (John Doyle), The Pajama Game (Kathleen Marshall) and Is He Dead? (Michael Blakemore) bear this out. Could another helmer have engineered a similar feat of alchemy with Come Back, Little Sheba? I’m skeptical. Even with a wellspring of talent to choose from, the result probably would have been pretty much the same no matter who had wound up with the assignment. There’s only so much you can do when the play is a dog.

Comments:
I always preferred Picnic to this anyway, but with Merkerson in it, I might have to check it out. I love her, and she's fantastic in that Lackawanna Blues movie from a few years ago. She'd be worth seeing on stage, but I'm saving myself for the "all cullud Cat on a Hot Tin Roof."

Thanks for citing my hatred of Shirley Booth's performance. At least you found something positive about it, though. I stand by my statement that I know why the damn dog ran away. When she accepted her Oscar, Little Sheba should have bitten her ass when she got back to her seat.

You nasty, Josh R. You can practically see up that guy's shorts in that picture. I know that's why you selected it.