The Lady is a Scamp 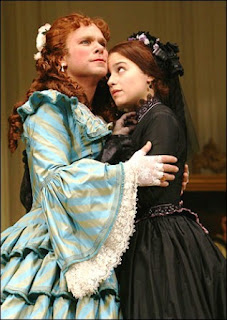 By Josh R
Miss Daisy Tillou is all atwitter — and when she starts fussing and chirping, she’s practically her own ornithological kingdom. Fluttering around her well-appointed drawing room like a skittish butterfly fretting over where to alight, her manner — consisting of equal parts daintiness and dizziness — represents a perfect marriage of the Victorian ideal of feminine behavior and the combustible nervous energy of a born drama queen. When people pay her compliments, she bills and coos like a puffed-up pigeon, batting her eyelashes in giddy delight. Swathed in reams of ruffles and frills, her round little face framed by mountains of ringlets which bob up and down as she moves (she looks rather like a giant dessert), she primps and flounces with the self-satisfied air of a plump turkey flaunting its plumage with the certainty of a peacock. When something occurs to offend her delicate sensibilities, her eyes widen in horror as she clasps a lace handkerchief to her ample bosom (she’s as well-upholstered as the plush Victorian furnishings that surround her) while her heart-shape mouth contracts into a taut little circle from which a high-pitched squeak of disapproval is emitted. She’s the kind of dish that once inspired poets to reel off verses extolling “the delicate flower of womanhood.”

It may come as a mild shock, then, to realize that Daisy is the creation of two men, born over a hundred years apart but working together with the conspiratorial delight of long-lost twins. The first is Mark Twain, whose previously unproduced play Is He Dead? is receiving its belated Broadway premiere at the Lyceum Theatre, in a spiffy adaptation by contemporary playwright David Ives. The second is Norbert Leo Butz, the delightfully nimble comic actor who prances, preens and pouts his way through the role of Daisy as if the concept of cross-dressing for laughs had just been invented. As to the question posed by the play’s title, the answer is a decisive no — but the coming together of Mr. Twain and Mr. Butz does represent a match made in heaven.

Twain’s play — which was only recently discovered among musty volumes in a university archive — is built around the kind of far-fetched contrivances that would never fly in an enterprise that took itself seriously. Since its author is justly renowned as one of the greatest vernacular satirists this country ever produced, there isn’t much risk of that; the surprise is how effortlessly Twain adapts his style to the creation of a work that functions as pure farce. The featherweight plot is really little more than an excuse to put a man in a dress; still, the central conceit is a clever one. Jean-Francois Millet is a struggling Parisian painter in dire financial straits; since there is no market for the work of living artists, he can’t sell a painting to save his life. That being the case, he fakes his own death and assumes the guise of his only surviving heir — a fictitious sister named Daisy, who supervises bidding wars over the work of her deceased brother and makes a killing from the proceeds. Complications naturally ensue — mostly as an excuse for the kind of comic hijinks that would embarrass the likes of Aristophanes. Unlike the recent revival of The Ritz, Is He Dead? finds ways to make the antiquated devices of farce seem fresh and inventive; the gags, which involve an empty coffin stocked with limburger cheese to keep suspicious mourners at a distance and an ingénue with detachable limbs, are so patently ridiculous that you feel like a sucker for laughing at them; but then, low comedy, when done correctly, can transform silliness into sophistication with disarming sleight-of-hand.

The lion’s share of the credit for this must be conferred upon Michael Blakemore, who directed the original production of Noises Off! and clearly understands the ins and outs of farce as well anyone who’s ever attempted the genre. His entire cast, which features nary a weak link, seems to be acting in clover. It includes Michael McGrath, John Alan Robbins and Jeremy Bobb as Millet’s motley collection of cohorts, who help him to perpetrate the ruse; veteran character actor John McMartin as a respectably dirty old man; LoveMusik’s David Pittu, who triples in three different roles with a deliciously florid array of accents; Bridget Regan as a jealous girlfriend who thinks Daisy is poaching on her turf, and winds up in drag for reasons too silly to explain; and Patricia Connolly and Marylouise Burke as an addlepated pair of landladies. Best of all are Byron Jennings, who does everything but twirl his mustache as the kind of villain who would make Basil Rathbone snicker with delight, and Jennifer Gambatese as the dewy-eyed ingénue, who looks like Olivia de Havilland in Gone With the Wind and speaks in the same soothing, honeyed tones. “Your kisses are so like Jean-Francois’,” she marvels in perplexed befuddlement, demurely oblivious to the fact that she is all but being ravished on a divan chair by her newfound best friend.

But the evening belongs, as it should, to its leading lady — or rather, its leading man. As Mr. Butz so ably demonstrated in his Tony-winning turn in Dirty Rotten Scoundrels, he is a clown par excellence, with a talent for slapstick that transforms run-of-the-mill sight gags into bravura feats of comic ingenuity. If his scenes as Jean-Francois don’t give him quite as much opportunity to really let loose, once he straps on the hoopskirts, he’s pretty much unstoppable.

The critical reaction to Is He Dead?, it should be noted, has been one of mild shock. The fact that it has become, however unexpectedly, one of the most well-received new productions of the season, shouldn’t prompt too much head-scratching. Is He Dead? isn’t a work of any historic importance such as The Adventures of Huckleberry Finn or A Connecticut Yankee in King Arthur’s Court — but it has the same trademark wit that distinguished both the best and the least of Mark Twain’s oeuvre. It’s been many years since Mr. Twain went off to his heavenly reward — but on the stage of the Lyceum Theatre, darned if he isn’t alive and kicking.