It's Good to Be Bad (Make that Really, Really Bad) 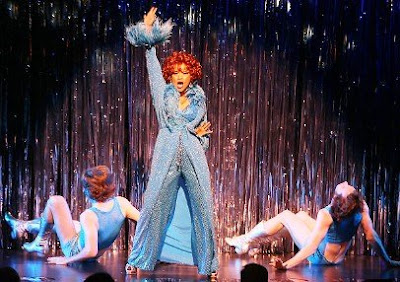 From the opening strains of “Tomorrow,” Little Orphan Annie’s sugar-coated ballad of optimism that kicks off a medley of showtunes performed (or to be more accurate, decimated) by Googie Gomez — a cabaret singer who couldn’t locate a melody if one hit her over the head — you know you’re in for something special. For Googie, a pint-size, glitter-encrusted dynamo with a king-size ego, a tin ear and the most ridiculous collection of wigs this side of Clown College, is not simply untalented — she’s untalented with a vengeance. Flanked by peppy go-go boys and bulldozing her way through the collected works of Jule Styne, Kander & Ebb and Rodgers & Hammerstein without betraying so much as a shred of musicality, she hits every wrong note with the hard-driving intensity and unshakable conviction of one who’s determined to see her name in lights, no matter who she has to step over or how many eardrums she shatters in the process. For 10 magnificently grotesque minutes, during which this legend-in-her-own-mind produces sounds alternately reminiscent of a cat being strangled, a miscalibrated foghorn and Fran Drescher, there isn’t a more joyful noise to be heard on Broadway.

Chalk this up to the fact that this tiny cyclone of terror in polyester prints and day-glo lipstick — whose woefully misplaced confidence is matched only by her ruthless hunger for success — is played by the infinitely resourceful Rosie Perez, an actress who knows exactly which notes to hit even when hitting the wrong ones. Her gut-busting, go-for-broke turn as a tone-deaf diva, hubristic and deluded enough to think she can make Streisand and Midler cower in her shadow, constitutes the only compelling reason to make a trip to Roundabout Theatre Company’s revival of The Ritz, a comedy set in a gay bathhouse and currently flexing its somewhat puny muscles at Studio 54.

Terrence McNally’s 1975 hit play, a product of the carefree era before the specter of AIDS brought an end to the heyday of the bathhouses, comes equipped with the standard trappings of farce. The helium-weight plot, which involves a lot of slamming doors, sight gags and multiple instances of mistaken identity, attempts to mine humor from the shell-shocked reactions of hetero squares dropped headlong into a flamboyantly gay universe. Gaetano Proclo, a hapless sanitation company president on the run from the mob, asks a cab driver to take him to the last place anyone would ever think to look for him; the driver duly deposits him at The Ritz, a seedy Dionysian pleasure palace populated mostly by buff specimens of manhood in teeny-tiny towels. It takes a while for Proclo to figure out that he hasn’t wandered into any run-of-the-mill health club; as played by Kevin Chamberlin as the kind of sheltered, complacent midwesterner who could listen to recordings of The Village People for hours on end without catching a whiff of irony, he registers his dawning awareness of the wonders on display with the aghast, wide-eyed befuddlement of a Benedictine novitiate trapped backstage at a Beastie Boys concert. While dodging the advances of a determined “chubby chaser” — a nimble little fellow who prefers his conquests on the portly side — and the dogged Googie, who has mistaken him for a Broadway producer, Proclo tries to evade capture by the assortment of private detectives, Mafia thugs, confused spouses and other lunatics who have descended upon The Ritz en masse for the purpose of tracking him down. Hiding in the steam room proves not to be the best idea.

The steam room is, of course, one of the prime attractions of the titular establishment, at least for the men who frequent it (and if you don’t understand why, I’m not going to spell it out for you). There is literally plenty of steam on display in Joe Mantello’s raucous new staging — kudos to the dry ice machine operators — and the result of so much moisture in a contained space is the unmistakable presence of mildew. The tradition of farce doesn’t demand much in the way of dramatic substance — if anything, it would seem to call for a complete lack of it — but it does require an element of cleverness, and humor that seems fresh even if the gags involved date back to Plautus. Most of the jokes in The Ritz are of the variety that you can see coming from a mile away, and what might have seemed titillating and risqué to audiences of the 1970s feels downright quaint in the present context. Great contemporary farces — Michael Frayn’s Noises Off! being an obvious example — can create an element of surprise in the way they frame their tried-and-true Keystone Kops style antics within a tight, ingenious structure that builds suspense through tension and release. In The Ritz, the sequence of slapstick set pieces feels haphazard and forced; nothing really fits together in the way that it’s supposed to, and the jokes feel more tired than they would otherwise — instead of a chain of firecrackers going off, The Ritz creates the impression of one slow fizzle.

The energetic cast members do as much as they can playing a broad spectrum of types … make that very broad, indeed. In addition to Patrick Kerr’s indefatigable chubby chaser, who is nothing if not dogged, there is Brooks Ashmanskas’ sashaying nymphomaniac, an irrepressible cut-up who serves as Proclo’s friendly tour guide through the realm of All Things Gay; Terrence Riordan as the dim-bulb private dick with the sculpted body of a marble Adonis and the speaking voice of a pre-adolescent girl; and David Turner and Lucas Near-Verbrugghe as a twin pair of bathhouse attendants who dispense towels and one-liners with twinkling good cheer. Among the scantily clad ensemble players — most of whom have obviously logged many hours at the gym — are actors playing characters listed simply as “Man in Chaps” and “Crisco Patron” (in reference to the shortening substitute; use your imagination). Anchoring the proceedings quite ably is the talented Mr. Chamberlin, who wrings more laughs than could be reasonably expected from McNally’s archaic set-ups. Scott Pask’s clever set design, which suggests the vast dimensions and labyrinthine twists and turns of this tacky sexual playground, abets the devices of farce in a way that the text only occasionally manages to do.

But the evening unequivocally belongs to the invaluable Ms. Perez, whose energy never flags even as the production around her tends to stall. The role’s originator, Rita Moreno, earned a Tony Award for her near-legendary performance, but her successor attacks it with a tenacity and verve that is menacingly proprietary. Brazenly trumpeting her gifts while promoting her wretched act to anyone within earshot, Googie warns that “the band sometimes plays (the song) in a different key than I sing it” — a statement which could easily qualify as the understatement of the decade (and for anyone who ever longed to hear “I Could Have Danced All Night” performed to a disco beat — and with a heavy Puerto Rican accent — your moment has come). Googie loses a stiletto pump midway through her routine — long after having lost the melody — but she soldiers on, blissfully impervious to her own shortcomings. Trouper that she is, she recognizes that the show must go on. Unfortunately, it’s a show that seems to go on without much of a point whenever its demented nightingale heads offstage for a breather. In the midst of so many half-naked men, it’s a woman — albeit one frequently mistaken for a transvestite — who stands out.