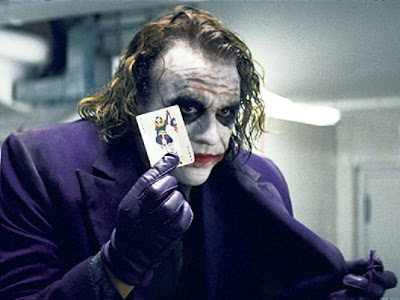 By Edward Copeland
Something strange happens to me when I see a new film featuring a contemporary performer who has died. When I saw the ads for Soul Men with Bernie Mac, it was jarring and this happens to me a lot. However, when seeing The Dark Knight for the first time, I didn't get this feeling because Heath Ledger's work as the Joker is brazenly, brilliantly alive.

I think the fact that Ledger is unrecognizable beneath his makeup and with his voice that I didn't have my usual reaction to watching a recently deceased actor and was able to concentrate on the phenomenal performance instead.

As for The Dark Knight itself, it is even better than Batman Begins and Christopher Nolan continues his streak of proving himself to be a true cinematic find.

It's not that the film is flawless; it's overlong and Harvey Dent's transformation into Two-Face seemed tacked on and rushed in a way that short-changes Aaron Eckhart's chances to do anything with the character.

The Nolan Batman films are much darker, almost humorless, when compared to the series of films that Tim Burton started and Joel Schumacher destroyed, but the funnyman in me still wanted to see when Eckhart's face gets disfigured, an African-American actor take over the role to make up for Billy Dee Williams somehow turning into Tommy Lee Jones in the other series of films.

Despite all the good things The Dark Knight has going for it, Heath Ledger really makes the movie work. When all the initial Oscar buzz began about him, I suspected it might have been people caught up in grief over the talented young actor's untimely death. Now that I've seen it, I'm a believer. I loved Jack Nicholson's Joker in Tim Burton's Batman, with his ability to be both funny and scary but I always knew it was Jack. I never knew it was Ledger: His Joker is as enigmatic at the end of the film as he is at the beginning. No explanation. No back story. Just a uniquely insane criminal force.

Ledger's creation and the way Christopher and Jonathan Nolan wrote the Joker in the screenplay is brilliant. The best bad guys almost always are the ones that we don't get an explanation for why they are the way they are. What we do know about Ledger though was he had great potential and wide range and his loss feels even deeper now than when the news first broke.

Comments:
The Joker is a comic strip character.

"The Dark Knight" was quite literally so dark more than half the time I couldn't tell what was going on.

It was equally a strain to understand what the hell Batman was murbling on about, but then I quit and spared myself any additional anguish. He remained steadfastly incomprehensible for the duration. So be it.

However, it did reach incredible decibel levels and those managed to keep me awake and on edge.

It's been ages since the Oscars have held any interest for me, and I don't know what, if anything, this jumbled mess of a film won, but based on Ledger's performance as the Joker, he deserves a gold star for work finally well done.