Fading in the last leg

BLOGGER'S NOTE: This post is part of the Ambitious Failure Blog-a-Thon being coordinated by William Speruzzi at This Savage Art. 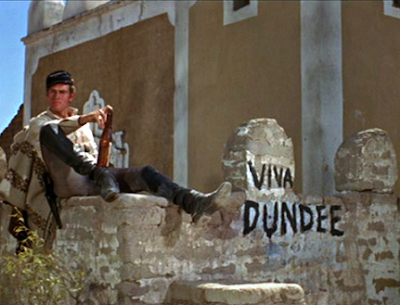 By Wagstaff
Unlike Edward Copeland’s experience with The Cotton Club — liking it as a youngster and then lowering his estimation on a more mature viewing — my encounter with Major Dundee was quite the opposite. The early pan-and-scan VHS version of Dundee, with its grainy print and washed-out colors was almost unwatchable. It was well known that Sam Peckinpah’s vision was butchered beyond repair by producer Jerry Bresler and Columbia Pictures. I had almost written the film off when news of a restored DVD version with additional footage and a new score got me excited again. By this time I was familiar with Peckinpah’s other work and I waited with baited breath for it to arrive from my Netflix queue. I wanted to call Major Dundee a major done deal.

Alas, while it wasn’t the forgotten masterpiece I had hoped for, it still had enough to keep any Peckinpah fan glued to the screen. 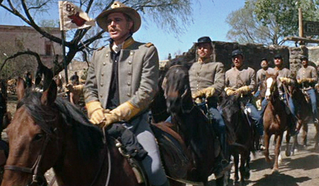 Major Dundee was Sam’s first feature after Ride the High Country, and it’s arguably his most ambitious; if not dramatically, then in terms of sheer scale and the logistics of production. I daresay it has more men and horses than any other Peckinpah film. Sure, he got to use a train and blow up a bridge in The Wild Bunch, but Major Dundee makes that film look like a chamber piece. Major Dundee was a grandly imposing yet necessary stumbling block on the road to The Wild Bunch’s greatness. 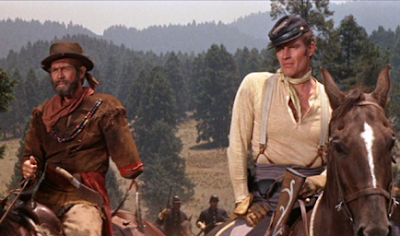 The story concerns a group of U.S. Cavalry in the Territory of New Mexico led by Maj. Amos Charles Dundee. They set out to destroy the Apache warrior Sierra Charriba, who has raided, sacked, and looted an area three

times the size of Texas. It is during the waning days of the Civil War, and Maj. Dundee is short of men and supplies. He supplements his small group of scouts and army regulars by enlisting the aid of Confederate prisoners jailed under his command at Fort Benlin. He tells potential volunteers, “I need horse soldiers — men who can ride, men who can shoot. In return, I promise you nothing … saddle sores, short rations, maybe a bullet in your belly … and free air to breathe, fair share of tobacco, quarter pay … and my good will and best offices for pardons and paroles when I get back.” He also promises to shoot out of hand any deserters once they’ve signed up.

Maj. Dundee plans to avenge an entire company of men that were sent out of Fort Benlin only to be ambushed and massacred at the Rostes ranch. “I am Sierra Charriba! Who you send against me now?” boasts the fiercely cunning warrior. That man would be the equally fierce, but deeply flawed avenging angel, Maj. Dundee. The Apache practice after a raid is to keep the male children and train them to become part of the fighting tribe. Dundee also intends to get these children back. It is the winter of ’64, and Charriba and his gang of 47 warriors are wintering in French controlled Mexico. Maj. Dundee and company travel south to rescue the children and to pursue vengeance.

All this works wonderfully for the first hour or so. We sense Peckinpah doing some heavy lifting, moving large blocks of character and plot into place for something truly special. The acting is fantastic, the dialogue top-notch and rich with the kind 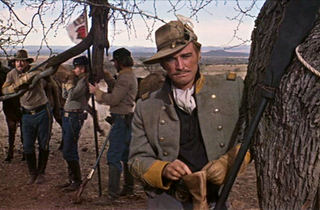 of Western slang you’d expect from Peckinpah. It is replete with lines such as “You are a $70, red-wool, pure-quill military genius, or the biggest damn fool in northern Mexico” and “I want everyone under my command to be drunker than a fiddler’s bitch by nightfall.” (Where did Sam get this stuff?) The film is plenty atmospheric, the sense of time and place expert. Costumes and faces look authentic. The plot’s architectural design is complex and resonates with subtext. The deep divisions of Civil War America feel contentious and real. The racism of both North and South is convincing and honest. A brilliant tapestry of characterizations is woven into something ironic and satisfying. Then … it all falls apart. To borrow a quote from Dundee that could be about the film itself, “You were a rock once, now you’re crumbling like old chalk.” I’ll talk more about the “failure” part of “ambitious failure” in a moment, but first, the cast. 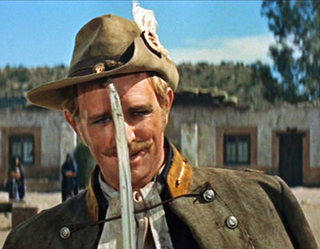 Richard Harris is outstanding as Capt. Benjamin Tyreen, leader of the Confederate prisoners — a man who, in Dundee’s words, is “a would-be cavalier, an Irish potato farmer with a plumed hat fighting for a white-columned plantation house you never had and never will.” Tyreen and Dundee know each other well; they have a history that goes way back. Dundee uses Tyreen’s outdated code of Southern chivalry — the honor of his word — to keep him and his men in line. Capt. Tyreen promises to kill the major, once the Apache are taken or destroyed. James Coburn is excellent as the one-armed scout Samuel Potts. He is knowledgeable and has a natural affinity for the Indians and Mexicans; but he will go with Dundee only so far. I’d wager that his viewpoint is the closest to Peckinpah’s; they even share the same first name. “They all look alike to you, don’t they?” he asks the major. 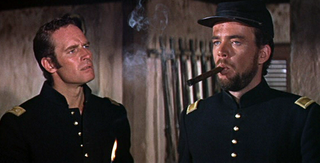 There is other stellar work from Jim Hutton as the green artillery man, Lt. Graham, who provides several doses of humor, and a slew of Peckinpah regulars such as Slim Pickens, L.Q. Jones, Ben Johnson and Warren Oates, who’s given a monologue and a chance to shine as a Southern deserter who gets executed. There also is sound work from Michael Anderson Jr. as Tim Ryan, the bugler whose journal narrates the movie, and whose loss of virginity gives the boys some sexist laughs. At the heart of the movie is the mystery of Dundee himself. It is Charlton Heston’s most complex role. He is presented simply at first. “I have only three commands. When I signal you to come, you come. When I signal you to charge, you charge. When I signal you to run – you follow me and run like hell.” Then things get murkier. “Are you pursuing the Apache, Major, or a promotion?” The question is asked more than once, and we never find out the answer. Dundee has been demoted to jailer, something that rankles him no end, after “he tried to fight his own war at Gettysburg.” He secures the safe return of the captured children, but then still presses on deeper into the quagmire of Mexico, his men swamped on all sides by Confederates, Apaches, Mexicans, and the French. He is a man driven, but by what? After he “liberates” a Mexican village that has been previously “liberated” by the French, the peasants throw a fiesta, but Dundee doesn’t seem to enjoy it much. “You don’t have the temperament to be a liberator, Amos,” Tyreen tells him. When Amos and his band leave the village, the sequence becomes a harsher and more arid precursor to the similar sequence in The Wild Bunch where Pike and his gang leave the plush, Eden-like village in a drawn out celebration.

The problems in Major Dundee begin in hour two, just about the time the implausibly beautiful Teresa Santiago (Senta Berger) shows up. A faltering midsection is then followed by a weak to nonexistent third act. I don’t care how much butchering Jerry Bresler did, nothing could have saved a script that was basically unfinished. It’s a damn shame too, because what’s left is sporadically interesting. You get the feeling that Sam Peckinpah’s logistical problems (he scouted locations in Mexico that were too far apart) the problems with the script, and Dundee’s arrow wound and subsequent drinking and moral disintegration, all mirror each other. By the end, even though they have killed Charriba, the best they can hope for is to fight their way across the Rio Grande and return safely to the U.S. The meandering folly of this ambitious failure is, if anything, even more pertinent today than it was in 1965. American idealism, foreign adventurism and a divided country are still with us. In spite of, or maybe even because of its failures, Major Dundee has weighty if deeply ambiguous things to say on these subjects.

Comments:
I was pretty bored by Major Dundee, but I do agree that Richard Harris was the best thing in it.

I would give Major Dundee a sideways thumb - good cast, nice production, but, as you say, it does fall apart a little in the second half.

I lost count of the times that I have seen this movie. The extended version from 2005 is the one to watch. The Wild Bunch is really Major Dundee transported 40 years ahead of time. Plot lines and themes that were written but not shot ended up in The Wild Bunch. Other scenes like the exit from Angel's village mirror Dundee's command leaving the village. There are several other scenes which also recall the first movie.

The producer on Dundee was contrary and penny pinching and did all he could to make things impossible for the director and his film. Jerry Bresler failed in Hollywood soon after. Peckinpah lasted 20 years more. Peckinpah's name lingers; Bresler's does not.