A pair to remember 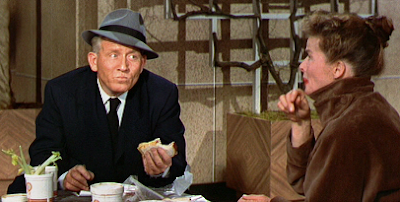 By Edward Copeland
Admittedly, I've never seen the more dramatic examples of the Tracy-Hepburn pairings (I haven't heard good things), but I did finally catch up with 1957's Desk Set. While it's hardly in the league of Woman of the Year or Adam's Rib (or even Pat and Mike), it does go to show what great comic chemistry this couple had.

In a way, the plot of Desk Set almost seems timeless as Katharine Hepburn plays the head of a television network's research department and Spencer Tracy plays an outsider hired by the network to use his magical computer technology to serve the research function in less time and with fewer employees.

The age-old battle of man versus machine plays as timely today when corporations try to do more with less as it must have in the 1950s. Still, it's just an excuse to let Tracy and Hepburn play.

Some things do strain credulity (Kate was 50 when she this film was released with her playing a single executive, pining away for her infrequent dates with the ever-reliable Gig Young as her superior). On the whole though, Desk Set is watchable fluff.

A prime example of the Tracy-Hepburn magic comes during the scene depicted in the photo at the top of this post. Tracy's character invites Hepburn's to a lunch to ask her some questions, ostensibly about the way her department runs. Kate anticipates a trip to a nice restaurant, but what Spence has in mind is a pseudo-picnic on the cold, wind-blown roof of the network's skyscraper.

The questions aren't of the normal variety either: Lots of odd math problems. However, the actors turn this into a comic feast, literally, with their mouths stuffed with food most of the time. The entire setpiece turns out to be priceless.

Desk Set offers others like this and while it's certainly nowhere near their earlier comic efforts, it's still mostly a joy to watch. Tracy and Hepburn create a vivid pair of corporate eccentrics and their skills sell the whole package.

For added measure, the supporting cast includes the great Joan Blondell as one of Kate's single co-workers (and she was older than Hepburn!) and she brings just the right amount of sass and spice to the mix.

Comments:
I've never really understood why Pauline Kael hates this film so much. Sure, it's not on level of Hepburn & Tracy's best comedies (and personally, I think you sell Pat & Mike a bit short - to my way of thinking, it holds up rather better than Adam's Rib), but it's still a perfectly agreeable light diversion with fun performances and some nice banter written for the two stars. I've seen it a few times now, and even with that ridiculously over-scaled prehistoric computer that takes up an entire wall (it looks like one of the original "Star Trek" sets), I don't think it's aged all that badly. Pauline was just in a grouchy mood when she saw it - either that, or it had been too long since she'd seen Without Love, the all-time dud as far as Spence & Kate's comic collaborations are concerned.