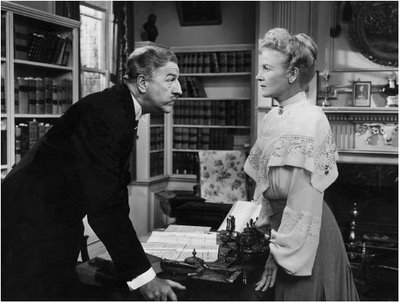 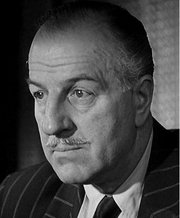 By Edward Copeland
Tall, debonair Louis Calhern earned his sole Oscar nomination in 1950 for portraying Justice Oliver Wendell Holmes in one of the corniest biopics ever, The Magnificent Yankee. Not that Calhern isn't good (as is Ann Harding as his wife), but I can't help but feel this nomination was to make up for the one he didn't get the same year for a much more deserving role as a lawyer, the shady Lon Emmerich in John Huston's great film The Asphalt Jungle. Lon, down on his luck and his cash, hopes to fleece the thieves after their heist so he can vanish far away with his mistress (an early role for Marilyn Monroe). Despite his unscrupulous designs (What happened to honor among thieves?), thanks to Calhern, Lon managed to garner some of the audience's sympathy anyway.

In The Magnificent Yankee, Calhern's Holmes almost becomes a comic figure as it speeds through his 30 years on the Supreme Court, with very little focus on the cases themselves. You just wait for him to mention yelling fire in a crowded movie theater (though it's an opera house in the movie) but you get little more insight into his judicial thoughts as the movie focuses on how he and his wife use the revolving door of clerks to substitute for their lack of children of their own. Perhaps the most surprising thing about The Magnificent Yankee is that it was directed by John Sturges, the man who would go on to make Bad Day at Black Rock, The Magnificent Seven and The Great Escape. This film definitely feels at odds with what Sturges accomplished on those films.

Calhern did have an impressive career, appearing in many notable films such as the ambassador of Sylvania in the Marx Brothers' classic Duck Soup as well as roles in The Gorgeous Hussy, The Life of Emile Zola, Dr. Ehrlich's Magic Bullet, 1943's Heaven Can Wait, Hitchcock's Notorious, the title role in 1953's Julius Caesar and his final role as Uncle Willy in High Society, the musicalization of The Philadelphia Story. For me though, The Asphalt Jungle stands as his crowning achievement. It's not that The Magnificent Yankee is bad, it's just corny as hell and seems like it's providing Cliff Notes of a life that I for one would have welcomed learning more about.