The lighter side of Peckinpah 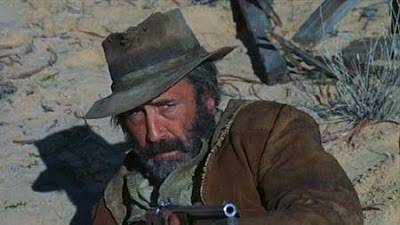 By Edward Copeland
Immediately following his landmark Western The Wild Bunch, director Sam Peckinpah was in a more whimsical mood and as a result his followup was the mostly comic Ballad of Cable Hogue starring Jason Robards. Now there is violence and death — practically bloodless compared to Peckinpah's previous film — and if you scratch beneath the surface, you might find some religious allegory at work, but don't let that get in the way of enjoying the film. Robards stars as the title character, whom we meet wandering on his last legs through a barren desert after being robbed and abandoned by a pair of scoundrels. Near starvation, dehydration and death, Cable is about ready to call it a life when he stumbles upon a rare spring of water amidst the endless sand and his entrepreneurial spirit kicks in. 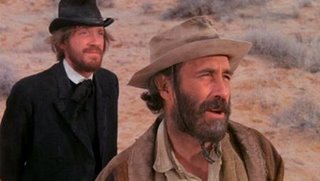 Before long, he's found his way to the nearest town, claimed the small patch of desert and christened it Cable Springs, charging passers-by and stagecoaches to quench their thirsts and starts accumulating a nice nest egg for himself. Time seems to stop — so much so that it's jarring when at one point in the film Cable says he's been at his new post for more than three years. Before he can get to the town, Cable needs a ride and it comes in the form of the horse of an eccentric self-proclaimed minister (David Warner) who happens by Cable Springs and soon becomes Cable's partner in developing the watering hole. Warner's performance and character aren't the only quirky elements in this tale — Peckinpah is in a particularly playful mood, employing split-screen techniques (sometimes dividing the image into four sections), speeding up the film like it's a silent slapstick comedy and other touches you almost don't want to give away so new viewers won't have the surprise ruined. (Here's a hint: adhere to Hal Holbrook's advice as Deep Throat in All the President's Men and "Follow the money.") 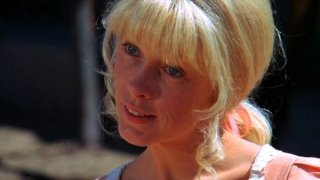 Aside from Robards and Warner, there are performances from other staples of the genre such as Strother Martin, Slim Pickens, L.Q. Jones and R.G. Armstrong. However, the most significant other character is Hildy (Stella Stevens), a town prostitute accurately described by Cable as "the ladiest damn'd lady" you're ever likely to meet. The story is deceptively simple — there is the element of Cable seeking vengeance on the bums who stranded him in the desert, but don't let that get in the way either. The Ballad of Cable Hogue is a lively and lyrical ode to the West and salvation, even containing themes left over from The Wild Bunch such as how progress changes everything. (As Al Swearengen so aptly put it on an episode of Deadwood this season: "Change ain't looking for friends.") Even the ending, which could be viewed as downbeat, has such a light touch, that it's hard not to smile. The movie is a quiet little gem — and there certainly are worse ways to spend two hours.

Comments:
I was always a pretty big fan of this movie when it came on late night TV in bad, chopped up prints. Now we can see it Letterboxed, or as you would say "the way God intended." Sweet.

If a movie can survive being shown in those grainy chopped up prints on UHF, then you know it has the stuff.