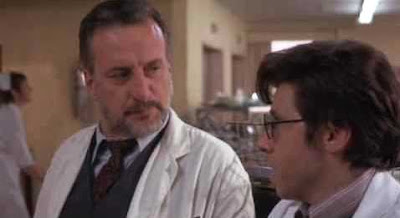 By Edward Copeland
As the luck of the draw of the GreenCine movie queue would have it, The Hospital arrived in my mailbox just days after the passing of actor Barnard Hughes. I'd seen the movie before, but never letterboxed and it's been a long time since I checked into Paddy Chayefsky's other Oscar-winning satire. The movie holds up fairly well. Granted, it's no Network (few things are), but Chayefsky's script sparkles with great things to say and is populated with fine performances, particularly from George C. Scott who scored an Oscar nomination for this the year after he refused the award for Patton.

In addition to the aforementioned Hughes, he's aided by a terrific thirtysomething Diana Rigg (who just turned 68 this week) and the cast is sprinkled with performers who would go on to bigger and better things, often in single-line cameos. A partial list of the cast: Stephen Elliott, Nancy Marchand, Frances Sternhagen, Stockard Channing, Richard Dysart, Christopher Guest and Robert Walden. (Yes, Mrs. Pynchon and Rossi worked in the same hospital prior to meeting up at the Trib on Lou Grant.)

While good, the screenplay doesn't hold a candle to Chayefsky's Network and one can't help but wonder what Chayefsky could have come up with today in an era of HMOs, malpractice fears and insurance headaches. Though he was right on the mark concerning medical errors — just check out this news story that moved just today. Unfortunately, Chayefsky didn't live long enough to endure those medical nightmares so he saddled his otherwise top-notch satire with a silly serial killer plotline.

The movie is hampered further because it didn't have a pro such as Sidney Lumet at the helm, but rather the sluggish direction of Arthur Hiller, who seems to only have made good films in his career such as this and The In-Laws purely by accident.

It's worth noting that Lumet did try his hand at a medical satire with 1997's Critical Care, though the script wasn't strong enough to make up for other shortcomings. It did contain a funny performance by Albert Brooks though as an aging doctor, hidden beneath old-age makeup.

Re-visiting The Hospital, what it reminded me most of all was St. Elsewhere, which hit on many of the same medical topics with humor and pathos (and similarly saddled one season with an unnecessary story about a rapist terrorizing the hospital. However, it's interesting to see the seeds of themes that Chayefsky would return to later.

There's a character who believes he's a prophet who saw a vision (which he compares to the burning bush just as Howard Beale would later) and there are even seeds of some of the trippier elements Chayefsky pursued in his novel and disowned screenplay of Altered States.

Despite Hiller's haphazard direction and the screenplay's wrong turns, The Hospital is still worth checking out. I do have one request for trivia help from those movie buffs out there: I could swear that Barnard Hughes not only plays Diana Rigg's father but also the surgeon who begins to perform the hysterectomy on the wrong patient. It looks like Hughes (with a mustache, unlike his credited character) and sounds like him, but the credits give no clue and I didn't catch what the surgeon character's name was. Does anyone know if that also was Hughes or, if not, the name of the actor who played the part?

Comments:
The imdb discussants on the topic of your trivia question seem to agree it was the same person playing both Drs. Mallory and Drummond. Odd that they would try that with an actor as distinctive as Barnard Hughes? I wish the so-called "in demand" or pay per view service would get movies of this calibre now and then. I'd like to see it. Not everyone wants to see Anaconda and Wedding Crashers.

I'm ready to watch this movie in its entirety. Knowing Diana Rigg is in it only seals the deal. I saw part of The Hospital years ago on TV and found it entertaining but confusing as hell. I must have come in in the middle and if I recall correctly, the story is told out of chronological sequence.

Arthur Hiller was never a director that got me very excited, but I do love Silver Streak.

I forgot Hiller was behind Silver Streak. So that's three watachable movies. Plaza Suite was also OK as was The Americanization of Emily, though I think that in pretty much every case, the movies would have been better served by a stronger director.