By Edward Copeland
A while back, I wrote about films you could watch over and over again, but this post takes a bit of a different angle and, in fact, involves television more than film. Over the past two weeks, I've sought out things that I could stare at mindlessly and, occasionally, actually pay attention to. I was pleased to see I was able to watch The Sopranos and keep up with more interest than I expected, though my mind would tend to wander through Big Love, especially since I found it hard to get its theme song, The Beach Boys' "God Only Knows" out of my head once I heard it. 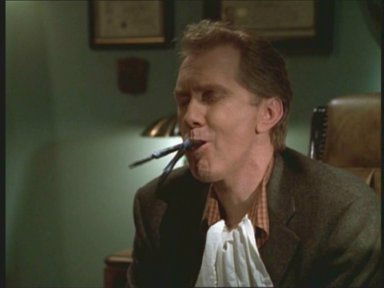 Other shows did provide a respite. If I wake up early in the morning around 6 a.m., my habit is to flip on Imus or CNN just to see what's going on, but I've been a lot more disinterested than usual of late so I can't tell you how pleased I was to find that FX's reruns of Buffy, the Vampire Slayer were showing my favorite season, Season 3, and really Joss Whedon's series in its own way was the most effective TV tonic I could find. Nothing pleases me more, at least in the past couple of weeks, than watching Harry Groener's gleefully polite and evil Mayor Wilkins and the brief appearance of Vampire Willow from the alternate universe. Eliza Dushku as Faith is a plus as well.

Sitcoms helped too, even ones that I was never that huge a fan of in the first place, but Lifetime's early morning reruns of The Golden Girls were a godsend. At the other end of the clock, Nick at Nite was mercifully still in the watchable seasons of Roseanne and TV Land was in the Diane years at Cheers, that is when either network didn't break up their schedule for their crappy original programming.

I still watched The Daily Show and The Colbert Report regularly as always, but they didn't please me the way they usually do. Scrubs and My Name Is Earl held up a bit better. 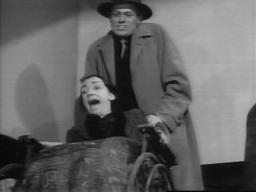 I did make attempts at watching some movies as well. I began watching David Lean's Hobson's Choice before everything changed. but by the time I finished it, I can't really say that I could recall much about it — and I'm sure it's not the movie's fault. I could never get through part two of HBO's Elizabeth I since its original airing kept being interrupted by stupid tornado warnings (Hey — that's why I watch HBO — to avoid interruptions like that. Just leave me in peace). This week, I finally watched the Green Cine disc of 1947's Kiss of Death which had been gathering dust upon my DVD player. I have to say I was disappointed, but again, I don't know if it's the movie's fault. Sure, Richard Widmark is fun, but Victor Mature is a stiff and I imagine I would have felt that way no matter when I watched it.

My next Green Cine rental is Sam Peckinpah's Pat Garrett and Billy the Kid. We'll see how that goes, but my mind is tending to wander a lot more than usual because I have so many things on my mind that I have to get done.

I guess there isn't really a point to this post. I'm really just trying to jump-start my writing so I can actually get down to writing a non-blog story that I really am afraid to write because it will make everything feel more real.

Comments:
Ed--I completely understand your idea of comfort TV. Last year I went through a terrible time, and it happened that TNT was running mini "X-File" marathons between midnight and 4:00 a.m. I remember writing to a friend that these reruns were extremly comforting--I could still appreciate and enjoy the excellence of this series without having to be entirely present. And connecting with that series that I loved did bring hints of happiness. I will also confess that in an even stronger metaphor to mac-and-cheese, "Murder, She Wrote" has offered strange comfort in troubling times. Isn't television wonderful.

"Bonanza" did it for me, once upon a time. Not sure if still comes on late Sunday night. I wonder how those Cartwright boys are getting on....Nowadays, for thumbsucking entertainment, I rely on singing cowboys.

I can *always* be bothered to get sucked into a TWILIGHT ZONE marathon (usually on SCI FI, every 4th of July weekend).

There's something about that series in that I prefer viewing it broadcast rather than spin it on DVD. Must be a "I wonder which one they're gonna show next?" thing.

Times like that, I just watch Simpsons re-runs and James Bond movies.

Also, re: Kiss of Death. It's far from being one of the great noirs and Victor Mature is one of my least favourite actors of the 40s. But as you mentioned Richard Widmark (who on other hand is one of my favourites) is great fun and I thought the climax was remarkably well-built-up - so tense it pretty much compensated for the movie's crappier patches and made me even remember it fondly.