From the Vault: Morgan Freeman 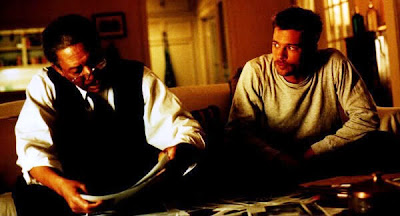 ORIGINALLY PUBLISHED SEPT. 17, 1995
When Morgan Freeman grabs your arm and urges you to follow him down a particular fork in life's road, his commanding and reassuring presence makes you eager to follow. Of course, the respected three-time Oscar nominated actor was actually just borrowing me to visually illustrate a point about conquering life's obstacles and fulfilling one's dreams. Still, this wasn't just an acclaimed actor tugging on me — it was Easy Reader from television's The Electric Company. For almost any person reared on educational programming in the 1970s, the symbolism — and the sentiment — would be hard to ignore.

In David Fincher's Seven, Freeman plays a homicide detective in an unnamed large city just days from retirement when he's confronted with what appears to be the beginning of a serial killer's spree. Partnered with Freeman is a new transfer to the city's force, played by Brad Pitt. The expected rookie-veteran friction is there, as Pitt is eager to pursue the case, where each of the victims represents one of the seven deadly sins, and Freeman wants to get away from it as soon as possible.

Seven marks Freeman's first role since securing his third Oscar nomination for 1994's The Shawshank Redemption and appearing as a military official in Outbreak. Previously he earned a supporting nomination for 1987's Street Smart, the role that first allowed him "to dance" on screen, and a best actor nod for Driving Miss Daisy in 1989.

While the nominations are flattering and he certainly wouldn't turn down an Oscar, Freeman has seen the dangers of looking for awards instead of good roles. When he was 13, he received a best actor prize, followed by merely an honorable mention the next year and no award at all the year after that, he said. It's tough to feel like a has-been at 15.

"If you think in terms of awards and roles, you're shooting yourself in the foot. I was crushed, but you have to get over that."

The ups and downs of any actor's career are a given, and Freeman has seen many since his teen years. During the 1960s, he performed office work while trying to make his way into the profession. When one of his office jobs fell through and Freeman was making a trip to the employment office to prove he'd been looking for work, he grew frustrated with his official designation as office worker. He told a small, older red-haired woman named Mrs. Lipton that he wasn't an office worker — he was an actor. Mrs. Lipton pulled out another stamp and told Freeman, "You've got six months. Go be an actor."

That was 1965. Before the deadline passed in 1966, Freeman had secured his first paying job as an actor in a play with a road company. That job, and the chance Mrs. Lipton gave him, started the slow, steady rise of Freeman's career — until it hit a dead patch in 1981, causing Freeman to believe he'd peaked and to consider driving a cab to make ends meet.

"When I'd get to a point where I thought, 'It's not going to happen. I'm not gonna make it,' some friend of mine would say, 'Ah bullshit, of course you are' and I'd be heartened by someone else believing in me, but many times I've been to the wall."

In 1983, Freeman had his sagging spirits and career revived by Paul Newman, who was casting roles for Harry and Son, a movie Newman was directing and producing as well as acting in. He gave Freeman a reading for a role he'd already cast and was surprised to hear that Freeman was idle at the time. "That's criminal," Newman told him. Freeman was leaving the audition, when Newman called him back and had him read for a different part. Newman hired Freeman on the spot and the climb to his current star status began again.

"In this business it seems like, if you've got work, you get work. It jump-started me again and it's been going like that ever since."

Since making Street Smart in 1987, Freeman has appeared in two Oscar-winning best pictures (Driving Miss Daisy and Unforgiven) and another best picture nominee (The Shawshank Redemption.) His acting approach is workmanlike. If asked how much of himself he puts into a certain part, Freeman responds, "I don't know what myself is so I don't see me anywhere." He isn't admitting to a personality disorder, he's just nodding to his chosen profession.

"I'm not methodical. I don't sit down and ponder roles. I read the script and if I like it and all things are equal and I've got a shot at doing it, then it's just a matter of learning the lines, wearing the costume correctly if possible, and, as Spencer Tracy said, come in prepared and not bumping into the furniture."

Among his upcoming roles is a part in Dead Drop, a chase movie starring Keanu Reeves and set to film in Chicago this winter. The chilling Midwestern season has Freeman looking forward to the climate "as much as I look forward to losing my big toe." When questioned as to why he took the part, Freeman breaks into a familiar tune and sings "Money. Money. Money. Money." Still, the substantial paychecks he now earns aren't his motivation any more than possible awards are.

"I'll act for free. If you don't pay me, I'll do it anyway. Money affords you the time and space to do this passion. I'm happy to have the passion to act instead of for digging ditches."

Freeman still remembers the importance of the opportunity Mrs. Lipton gave him.

"Somebody comes along, just when you're at the end of the rope and maybe there's a fork in the road and you're tired and you want to sit there on this rock maybe and think there's no point in going on because either fork I take is going to be the same thing. (Then) someone comes along and says, 'Here. I'm going this way. Come along.' You just need to get going again, to take that other step. Success is very often the very next step you take."