From the Vault: Love Affair 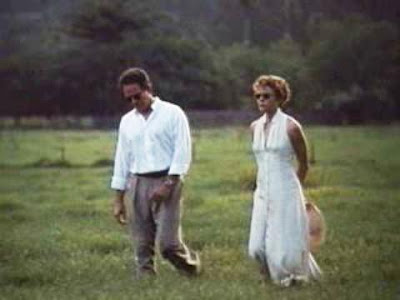 Unfortunately, the tragic twists late in the story undermine the great beginning and force previously smart characters to become stubborn and stupid.

Real-life husband and wife Warren Beatty and Annette Bening star as two people, engaged to others, who find themselves attracted to one another while flying to Australia.

In addition to the obvious chemistry the acting spouses bring, other elements of Love Affair resemble home movies. The screenplay by Beatty and Robert Towne uses Beatty's reputation as a playboy and draws on Beatty's own domestication late in life.

The appearance of Katharine Hepburn also provides a similar voyeuristic feel. The screen legend gives a great performance as Beatty's aunt, even though it appears as if she's really playing herself. The sense that this could end up being her final movie appearance simultaneously infuses the viewer with feelings of joy and pathos, excitement and nostalgia.

Garry Shandling also turns in a nice performance as Beatty's lawyer, sort of a kinder, gentler variation on his Larry Sanders television character, and injects a lot of humor into an already funny script.

The movie reminds you how welcome a presence Bening can be in a film and she plays a large role in the film's success.

The great cinematographer Conrad L. Hall also deserves praise for his gorgeous work. He brings the lush fields of Hepburn's island home, a stormy plane landing and the interiors of the rich's playgrounds all to life with equal vigor and beauty.

Director Glenn Gordon Caron moves the film along at just the right pace, never lingering too long or too little on any one scene. The problems only crop up when the story takes its requisite, emotional turn in the third act. Anyone who has seen the previous versions (or Sleepless in Seattle for that matter), knows about the roadblock waiting to be tossed in the path of the characters' happiness.

To the film's credit, the development of their romance feels so real and proves so entertaining that what happens still takes you by surprise. Sadly, when the tragedy finally occurs, the story goes slack. Both leads begin behaving in ways that seem completely at odds with how they acted before, resulting in an incredibly abrupt ending.

Still, when it's good, Love Affair reminds the viewer how infrequently Hollywood produces a successful romance. It's too bad the film's resolution leaves such an unsatisfying taste. Love Affair ends up being two-thirds of a great film forced into a shotgun marriage with a creaky, formulaic melodrama.