From the Vault: Just Visiting 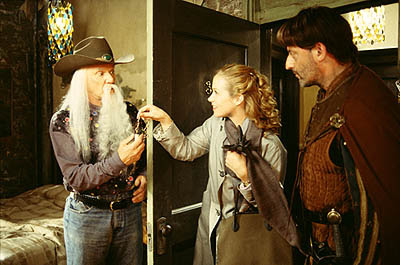 If you picked five kindergarten students at random and handed each a movie camera, odds are that at least four would produce something that more closely resembles a professional film than Just Visiting does.

Adapted from a gigantic hit comedy in France in the early 1990s, Just Visiting tells the tale of 12th century French nobleman Count Thibault (Jean Reno) and his faithful idiot of a servant (Christian Clavier) who, thanks to a wizard's foulup, find themselves in Chicago in April 2000.

By pure happenstance, the time travelers land in an exhibit at a Chicago art museum whose curator happens to be a descendant of Thibault and the spitting image of his lost love (Christina Applegate, in a movie role about a thousand times less sophisticated than even the worst episode of Married ... With Children).

If you've ever seen a fish-out-of-water or time travel tale, you'll be way ahead of this alleged comedy. Further reminding audiences of good movies about time travel is the presence of Malcolm McDowell as the bumbling wizard. Every time he appears, you can't help but wish you were at home watching him play H.G. Wells in Time After Time.

Reno and Clavier repeat their roles from the original French film and Clavier co-wrote this adaptation with Jean-Marie Poire and American schlockmeister extraordinaire John Hughes, who shows admirable restraint by not having a joke about flatulence for a full 40 minutes and waiting a good hour and 10 minutes before someone takes a hit to the groin.

On the positive side, the film is mercifully short at less than 90 minutes, though even that feels padded. If we're all very quiet, perhaps we'll be lucky and this film will fall as flat at the box office as its jokes do before vanishing to the darkest regions of untouched video shelves.