From the Vault: Jay and Silent Bob Strike Back 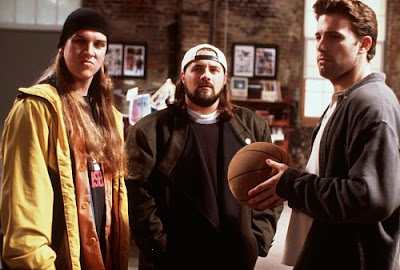 With Jay and Silent Bob Strike Back, Kevin Smith creates what few filmmakers do: an unabashed valentine to his fans.

What writer-director Smith promises to be the last live-action outing for Jay and Silent Bob isn't as accomplished as Chasing Amy, as funny as Clerks or as ambitious as Dogma, but the movie provides so much to laugh at that it produces more joy than most recent attempts at film comedy.

Jason Mewes and Smith return as the title characters in what basically amounts to a long inside joke. The comic book characters that Jay and Silent Bob inspired in Chasing Amy are coming to the big screen via Miramax and the shady New Jersey pals want to stop the production and reclaim their anonymity and honor, both of which have been challenged by nameless and faceless Internet critics.

The plot only exists as a loose thread to hang this farcical road movie on which takes the pair from Jersey to Hollywood, encountering just about every actor to ever grace one of Smith's films while spoofing the previous films and movies in general.

Because so many of the laughs depend on knowledge of Smith's first four films, much of the humor will likely dumbfound audiences unfamiliar with his work. Smith's movies have always referred to each other, but this well could be the most self-reflexive film ever made.

In fact, too much familiarity with Smith's work might work against you during a lengthy spoof of The Fugitive that Smith lifts nearly verbatim from a Jay and Silent Bob story he published in comic book form.

That aside, Jay and Silent Bob Strike Back turns out to be a hoot, providing nearly wall-to-wall laughs for those comfortable with Smith's vulgar but ultimately sweet-natured verbal humor.