From the Vault: Howards End 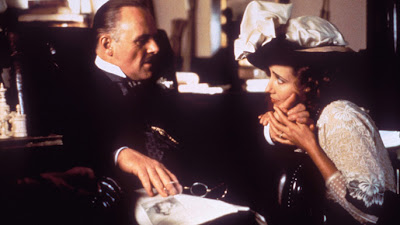 Following adaptations of E.M. Forster novels "A Room With a View" and "Maurice," the Merchant-Ivory team finds their greatest source material in another of Forster's works.

From outward appearances, this production may look like something that belongs on PBS' "Masterpiece Theater," but the passions bubble beneath the surface of this drama of love, class and real estate, involving the viewer in a way few films do.

Emma Thompson proves effervescent in her role as Margaret Schlegel, the kind bridge between the aristocratic Wilcox family, her own clan and an unhappily married clerk named Leonard Best.

Helena Bonham-Carter portrays Margaret's sister Helen, the feisty center of all the conflicts that occur between the families, especially the initial romantic misunderstanding with one of the Wilcoxes' sons.

Margaret, concerned that the Wilcoxes think badly of her family, reaches out to the Wilcox matriarch Ruth (radiantly played by Vanessa Redgrave). Margaret's earthy goodness touches Ruth so deeply that she bequeaths the Wilcoxes' treasured homestead, Howards End, to Margaret.

The inheritance doesn't sit well with the Wilcox patriarch, the stiff Henry (Anthony Hopkins giving a superb performance that, in its own way, proves more frightening that Hannibal Lecter).

Determined not to lose the estate, Henry sets out to woo Margaret. The plot developments seem perfectly tuned as they subtly touch upon all the themes, especially the problems of conscience and class. The entire cast excels and the production values are exceedingly high. Don't miss the opportunity to see Howards End in a theater.

Comments:
This is an exceptional film that really benefits from the great performances. I think Bonham-Carter is terrific here and I really believe this is a film that gets better as it goes along.

I just saw this film recently and it was breathtaking, even in the simple dialogue scenes. Best picture of 1992!