From the Vault: Leaving Las Vegas 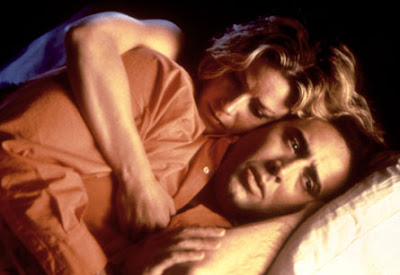 Momentarily taken aback when confronted with his own spoken intention to drink himself to death, Ben Sanderson responds, "Or killing yourself is a way of drinking." Ben (Nicolas Cage) says it with a glimmer in his eye; his determination to destroy himself has imbued him with a newfound optimism and unexpected bond with a prostitute named Sera (Elisabeth Shue) in Leaving Las Vegas.

Given the principal characters — a suicidal alcoholic and an abused woman who sells sex for a living — it would seem that Leaving Las Vegas must be a maudlin, depressing exercise, but nothing could be further from the truth. In fact, Leaving Las Vegas proves to be 1995's best love story and features two great performances.

Cage's film career has careened unevenly, but he creates a memorable character in Sanderson, a happy-go-lucky drunk who dreams of dying. Every nuance hits its mark and while it's easy to overplay the intoxicated, Cage never strays too far.

The other half of this dysfunctional duo belongs to Shue, who has circulated for years in fluff like Adventures in Babysitting and Cocktail, but she's never had the chance to strut her acting chops as she gets to do here. Her character could be a cliche, the hooker with a heart of gold, but her own neediness and her acceptance of Ben's wishes make her a sad but fascinating audience surrogate.

Mike Figgis directed Leaving Las Vegas and while his previous films (such as Stormy Monday) showed evidence of his stylish gifts, none of the earlier work prepares moviegoers for the power and courage of this film.

Figgis also adapted the autobiographical novel by John O'Brien, who committed suicide shortly before filming began. The film could be misinterpreted as an endorsement of alcoholism, suicide or prostitution, but its message concerns unconditional love.

Leaving Las Vegas charts a course that audiences can't easily predict and it stays on that path with complete confidence and authority. It knows what it's doing and where it's going. The bleak premise would seem decidedly unromantic, but no feelings have grown more convincingly between two movie characters in recent memory. Ben and Sera's relationship touches the audience and fills them with a hope that even its inevitable ending can't dim.