From the Vault: The Doors

BLOGGER'S NOTE: I'm re-posting this review, originally written when The Doors opened in 1991, as part of The Oliver Stone Blogathon occurring today through Oct. 6 at Seetimaar — Diary of a Movie Lover

The music was great. The man was out of control. The movie leaves a lot to be desired, namely a narrative. The film to which I refer goes by the name The Doors, though it should really be called Jim Morrison since the script by director Oliver Stone and J. Randal Johnson doesn't bother to depict the other band members with any depth.

Then lack of character development proves to be the major problem with this film. Near the beginning of the film, a 5-year-old Morrison vacations with his family in 1949 when they see the aftermath of a car wreck involving Navajos. The movie refers to the incident time and time again, apparently to explain why Morrison sets out on a path to self-destruction.

Alex Cox produced a much-better illustration of drugs sucking the life out of a talented individual in his 1986 film Sid & Nancy. Stone makes no secret of his admiration of Morrison, which makes me wonder how The Doors would have turned out if made by someone who didn't like Morrison since the resulting film comes off as spending 2 hours and 15 minutes with a truly repellent individual.

Val Kilmer does look and, in the live performance scenes, sound like Morrison, and his performance can't be faulted. Morrison comes off as a zonked-out prick and, since Stone worships him, you have to think that's an accurate portrayal. Then again, who's to say? The film creates a Morrison without any depth. It doesn't play him as a tortured artist or, in many ways, even a human being. He's just a doomed curiosity trapped in an extremely long music video — film as a hallucinogen, if you will.

The other members of The Doors may as well be cardboard cutouts for as much time and energy the film spends exploring them as individuals. Poor Kyle MacLachlan, trapped in a blond wig as Ray Manzarek, gets little more to do that sit at the keyboards, look concerned and occasionally defend Morrison in a DeForest Kelley-as-Dr. McCoy tone with lines such as, "Dammit, Jim's an artist."

The result comes off as even more despairing for the characters of Robby Krieger and John Densmore (Frank Whaley, Kevin Dillon), the other two members of the band. I don't know where Morrison and Manzarek met them. One scene, Ray suggests to Jim that they form a band. In the next, suddenly Krieger and Densmore complete the foursome.

Stone again finds himself trapped in the era of his obsession, namely the mid-1960s to the early 1970s, and, while the look rings true thanks to brilliant and stunning cinematography by Robert Richardson, the stilted dialogue borders on laughable, making me wonder if secret giggles lurk beneath the lines. On the plus side, Stone makes no assertions connecting the band to U.S. presence in Vietnam.

In many ways, the film reminds me of Tron, Disney's 1982 film about life inside a video game. That film looked great, but at its core offered nothing more than good graphics. The Doors stimulates visually, but doesn't engage the mind at all. In the end, it becomes nothing more than a meaningless assault on the senses about people who made good rock and roll between the sex and the drugs. 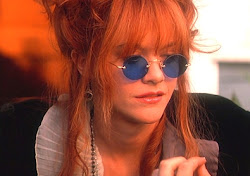 Stone, usually reliably opinionated, seems to lack a point of view here. He's neither defending Morrison nor chastising him. More importantly, the film lacks what much of Stone's work lacks — structure. When you go back and look at much of his body of work, Platoon, Wall Street and Born on the Fourth of July all fail to hold up on subsequent viewings, usually because of a lack of structure. Talk Radio remains the Stone film that holds up best because of its built-in structure of the radio broadcast. In The Doors, except for occasional reminders of the year, structure does not exist, just a drifting, mind-altering montage of events leading up to the inevitable discovery of Morrison in the bathtub. The most glaring example comes in a scene with Meg Ryan as Pamela, Morrison's "ornament." Jim finds Pam shooting heroin with another man and. in a rage, frightens her into a closet where he locks her in before setting the door ablaze. That's it. We hear no more about it. Twenty minutes later, Pam shows up at a recording studio. In the film's context, it's unclear that it's even the same time period as when he lit the fire and nothing explains her escape.

There are moments of fun, such as Crispin Glover's cameo as Andy Warhol and Stone's own brief ironic appearance as Morrison's UCLA film professor accusing Jim of being pretentious.

The Doors produced great music, but this film doesn't attempt to look behind the talent. Instead, it just shows an unpleasant man marching to his own beat on the way to his doom.

Comments:
Couldn't agree more. Morrison deserved far better - and got it, with the 'When your Strange' documentary.
Stone's film borders on parody with appalling dialogue and laughable characterization. Stone is a clumsy B movie director who thinks he's an 'Auteur'.
Best regards
Mark