From the Vault: American Pie 2 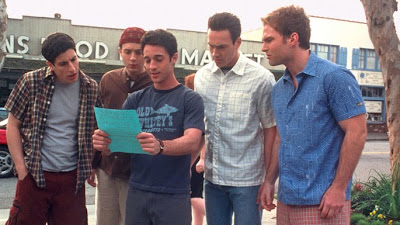 Buried deep within American Pie 2 lies a simple message: embrace your inner geek. Unfortunately, the idea gets lost amid another batch of crass and unfunny humor.

American Pie 2 takes place the summer after the characters from the first film have completed their first year of college. Again, the boys have a one-track mind except for Chris Klein's character, who remains true to girlfriend Mena Suvari.

When Stifler (Seann William Scott) finds his house shut down as party central, the gang decides to rent a beach house to pursue their partying. That's the slim peg on which the story hangs as you wait for all the characters from the first film to make an appearance.

As a comparison to the original outing, the laughs are about equal, but that doesn't make American Pie 2 good. The sequel does have its moments and the lion's share of those belong to Eugene Levy as Jim's dad and Alyson Hannigan as the girl obsessed with band camp. Levy and Hannigan deserve their own movie — it would be worth watching for their facial expressions alone.

The rest of the cast do their best, but there's only so much they can do with essentially one-joke characters. Again, Jason Biggs gets most of the heavy lifting as Jim. He doesn't have sex with a dessert this time, but he gets some equally embarrassing scenes.

American Pie 2's problem stems from the laborious setups that makes the audience anticipate the obvious punchlines so far in advance that you get impatient for the payoff.

What's interesting is that it's the quieter moments, when the script flirts with a more serious nostalgia for misspent youth, that resonate in a way the gags don't. That's unusual since when silly films try to be serious, they usually fall flat. In American Pie 2, those are the best parts.