From the Vault: Alice 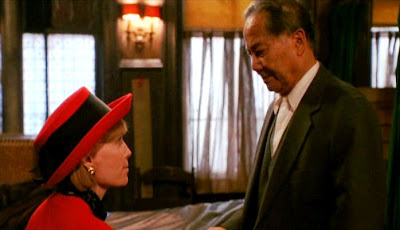 For his 20th cinematic trip out as writer-director, Woody Allen ventures into a whimsical galaxy reminiscent of his work in the "Oedipus Wrecks" segment of New York Stories.

Requisite actress Mia Farrow stars as Alice, a wealthy Manhattan housewife who explores the meaning and direction of her life with the help of an acupuncturist named Dr. Yang (the late Keye Luke) who specializes in magical herbs.

Much of the joy of Alice comes from the various fantastical trips that Dr. Yang's potions take Alice on, so it would be unfair to spoil them in a review.

Unlike the New York Stories segment, which shared the magical elements of Alice, Allen's new film doesn't wear out its welcome. "Oedipus Wrecks" tended to be a one-joke premise that went on too long but Alice just uses its fantasy devices to illuminate the larger story of Alice's transformation.

What sparks Alice's self-seeking quest is Joe (Joe Mantegna), the father of one of her children's classmates. For the first time in her staid married life, Alice feels the need to stray.

However, her strict Catholic upbringing and sense of duty keep her from admitting that her husband Doug (played as a jerk to the subdued hilt by William Hurt) hasn't fulfilled her needs and that Alice must live for herself before her church or her husband.

The themes in Alice are universal and have been addressed by Woody before. Infidelity, religion, family, love and dreams. It's typical Allen, only in Farrow's face.

Farrow's transformation in Woody's movies has been amazing. She has become his alter ego in many ways, serving as his surrogate in the films in which he doesn't appear. It's Catholic guilt instead of Jewish guilt, but the neuroses have become nearly one and the same.

In addition to Farrow, Hurt, Luke and Mantegna, Allen continues his trend of large, surprising casts. Cybill Shepherd is fine in her couple of scenes as a successful producer who doesn't want to be reminded of where she came from and Alec Baldwin has some of the best moments as the ghost of Alice's late love.

The funniest part of the film though belongs to Bernadette Peters' one-scene cameo as Alice's muse, desperately trying to help her write a novel.

Overall though, this is certainly a lesser effort by Allen. It is entertaining, gaining momentum as it goes along, but there still is something lacking.

Granted, it would have been nearly impossible to have anything but a letdown after 1989's excellent Crimes and Misdemeanors, but Alice is certainly not a waste.