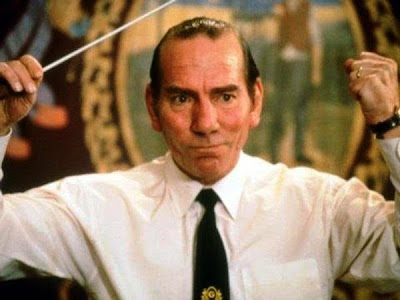 The first time I noticed Pete Postlethwaite was when I saw his distinctive face in the trailer for 1993's In the Name of the Father. Something instinctively told me, just from what little I glimpsed of his performance in that preview, that this actor, who'd previously been unknown to me, would score an Oscar nomination for his work in this film. He did and he deserved it. Postlethwaite died of cancer Sunday at the age of 64.

Postlethwaite made his feature film debut in Ridley Scott's 1977 film The Duellists. Though it took In the Name of the Father for the actor to appear on my radar, he had been in other films I had seen prior to that, including the Franco Zeffirelli/Mel Gibson version of Hamlet, where he took on the role of The Player King; David Fincher's Alien3; Waterland opposite Jeremy Irons; and Michael Mann's The Last of the Mohicans, the first time he worked with Daniel Day-Lewis.

It was that second teaming with Day-Lewis though that really brought Postlethwaite to prominence as the proud Irish father who goes to jail protecting his son against British allegations of terrorism in In the Name of the Father. Not only did he give a superb performance, but his face, that wonderful face, really belonged to an earlier generation of movie character actors, whose visages stood out in a way that skin and bone alone were almost enough to distinguish them.

After that success, Postlethwaite's appearances became more frequent, ranging from the go-between for Keyser Soze in The Usual Suspects to his great leading role as Danny, the man trying to restore dignity to an economically depressed mining town by forming a competitive brass band in Brassed Off. He even was an unlikely romantic lead opposite Rachel Griffiths in Among Giants.

He worked with Spielberg in Amistad and in 2010 alone appeared in both Christopher Nolan's Inception and The Town. He had completed another film, Killing Bono, which is scheduled for a 2011 release.