It's about which master you've been serving 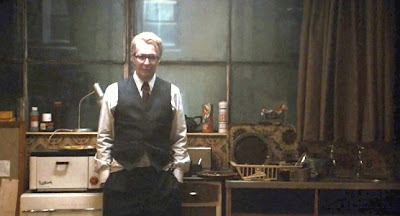 By Edward Copeland
I've never read a single novel by John le Carré and I remember when the TV miniseries Tinker, Tailor, Soldier, Spy aired starring Alec Guinness, who was Obi-Wan to me at the time (as well as the blind butler from Murder By Death — I was starting sixth grade — sue me!), but I didn't see it. In college, I did see the movie adaptation of le Carré's novel The Russia House starring Sean Connery and Michelle Pfeiffer, which I thought might be an aberration. I liked it quite a bit, but movies reared me to think spies meant James Bond. Now, that I've seen the outstanding new film version of Tinker Tailor Soldier Spy (no commas please), I'm getting the impression that, like Rick and the waters in Casablanca, I was misinformed as to the nature of le Carré's novels. Looking at the film adaptations of his books, I wish I had time to read them now. I can't compare the new film to the TV miniseries or Gary Oldman's performance as George Smiley to Guinness', but I can say that Oldman and the new movie both are damn good.

Tomas Alfredson directed this version of le Carré's tale, marking the Swedish filmmaker's first English-language movie and his first feature since 2008's creepy and moving vampire film Let the Right One In, remade in the U.S. two years later as Let Me In.

Tinker Tailor Soldier Spy takes place in the early 1970s in the upper echelons of British intelligence (referred to as "The Circus.") The top man, known as Control (John Hurt, in an excellent performance), receives word that a Soviet operative in Budapest wants to switch sides so Control sends agent Jim Prideaux (Mark Strong) to Hungary, but the operation goes awry and in the fallout, Control is forced to retire and so is Smiley. Control, already ailing, dies soon afterward. Word gets to Oliver Lacon (Simon McBurney), the civil servant in charge of British intelligence via Ricki Tarr, a discredited agent in hiding (Tom Hardy, unrecognizable when compared to his role in Warrior) that the Hungarian mission's objective truly had been to ferret out the truth about Control's suspicions that one of the top men in The Circus actually works for the Soviets as a mole.

Lacon approaches the retired Smiley and asks him to lead a secret probe to determine if the mole exists and, if so, who he is. Smiley enlists the help of a young, still-working agent, Peter Guillam (Benedict Cumberbatch), and another retired intelligence official Mendel (Roger Lloyd-Pack). Their search of Control's flat uncovers the code names he had given to his suspects, based on the old rhyme, attached to photos taped to chess pieces. Percy Alleline (Toby Jones), who took Control's job as chief, was called Tinker. Bill Haydon (Colin Firth), now Alleline's deputy, was christened Tailor. His close allies Roy Bland (Ciaran Hinds) and Toby Esterhase (David Dencik) were Soldier and Poorman, respectively. Smiley, whom Control also suspected, had been named Beggarman. 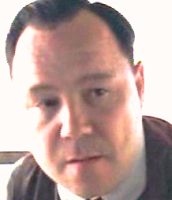 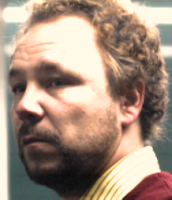 Bridget O'Connor wrote most of the screenplay until her death from cancer and it was completed by Peter Straughn. Through the taut direction by Alfredson and the carefully constructed screenplay that doesn't always play out in strictly chronological order and lacks major action sequences, Tinker Tailor drips with suspense, helped in no small part by the great ensemble assembled. If the film contains a weakness, it's that the four potential moles aren't developed well enough, particularly Hinds' character. Toby Jones acts his part very well, especially considering that they almost try too hard to make him look guilty. It's interesting to see Jones in a fictional role for a change after playing Karl Rove in W., Swifty Lazar in Frost/Nixon and being the best screen Truman Capote in Infamous. In addition to those already mentioned, there is a brief but memorable appearance by Kathy Burke as another operative who was purged. Burke just doesn't appear in enough movies, but her most memorable performance might be Queen Mary Tudor in Elizabeth opposite Cate Blanchett. If you look closely, you'll spot le Carré himself playing a drunk in a Christmas party scenes. The most amazing thing for viewers of Boardwalk Empire is the chance to hear Stephen Graham use his actual British accent in his role as Jerry Westerby, an intelligence officer monitoring the teletype the night of the Hungarian mission. His look also doesn't remind you remotely of Al Capone. Interestingly enough, one of the film's more important characters, Smiley's wife, never actually appears. The two performances that deserve the most praise are Hurt's brief work as Control, which frankly I'm surprised hasn't been mentioned much in awards talk. The MVP prize undoubtedly goes to Oldman's quiet, reserved work as Smiley.

Since Oldman took the film world by storm in 1986 in Sid & Nancy, he's made some bad movies and been over-the-top at times but he's also done a lot of great work yet his performances seem resistant to recognition from his peers. Granted, I haven't seen all of the top 2011 best actor contenders as of yet, but of what I have, Oldman belongs in that list. Tinker Tailor Soldier Spy deserves more notice than it's been receiving as well.