Be careful which enemies you make 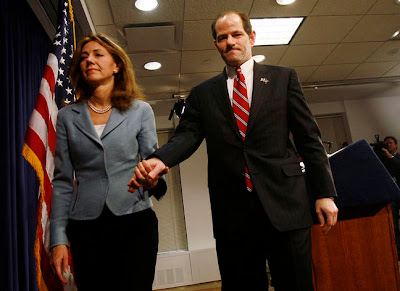 By Edward Copeland
In Charles Ferguson's outstanding documentary on the financial meltdown, Inside Job, one of his interview subjects is former N.Y. Attorney General Eliot Spitzer, who'd been known as the Sheriff of Wall Street for going after shady business practices long before the collapse. Toward the end of Inside Job, it makes the point that none of the financial firms ever faced investigations for their traders writing off high-priced escort services as business expenses, but the Justice Department did pursue Spitzer when it was discovered after he was governor that he used an escort service. The work that Spitzer did and the promise he held as a gifted politician that came crashing down because of his personal weakness are detailed well in another excellent documentary from the prolific filmmaker Alex Gibney, Client 9: The Rise and Fall of Eliot Spitzer.

Gibney also made the great 2010 documentary Casino Jack and the United States of Money as well as the similarly outstanding Taxi to the Dark Side and Enron: The Smartest Guys in the World. He also served in producing capacities on Ferguson's excellent No End in Sight and the brilliant Who Killed the Electric Car?

While Client 9 definitely makes the case that the political downfall of Spitzer may have been an orchestrated hit by his enemies in the business community and the Republican Party, Gibney doesn't try to downplay Spitzer's faults beyond the weakness that led him to seek high-priced sexual companionship in the first place. The film paints a broader portrait of the man's achievements and his hubris, which include a superiority complex and an approach that makes him come off as a bully, even if what he was trying to do was right.

As with the best documentaries, Client 9 teaches you things that you didn't know. It seems as if so many of the recent outstanding documentaries, no matter what their subject may be, show how spoonfed the U.S. media are, regurgitating "facts" that get handed to them while seldom checking their veracity. As far as I knew (and I imagine this to be the case with most people who heard about Spitzer and the call girl), his preferred escort was "Kristen" aka Ashley DuPre, who then turned herself into another of those freak celebrities, who ended up with a job at Rupert Murdoch's New York Post as a love and sex columnist.

Client 9, through interviews with one of the owners of The Emperors Club escort service, reveals that Spitzer saw "Kristen" maybe once but mainly went out with a woman who went by the name Angelica. Gibney interviewed her, but she didn't want her face or voice revealed, so an actress plays her part and reads the transcript of her interviews. Ironically, she's now a commodities day trader.

Where Spitzer really might have earned the enemies who were determined to stop him was when as attorney general he went after the head of AIG, Hank Greenberg, for the crooked financial games that company was playing, long before that company's collapse became a major cause of the world financial collapse and cost U.S. taxpayers billions in not one, but two bailouts. Greenberg was not at the helm by then, having been removed by his own board for violating company rules, but the methods AIG employed while Greenberg ran it were still going on and led to AIG's implosion.

U.S. Attorney Michael Garcia prevented Spitzer's pursuit of Greenberg prior to that by claiming the Justice Department was building a case against Greenberg, which they never filed. However, this same Garcia intercepted wire transfers Spitzer made and started looking into escort services that led to leaks that got Spitzer's sexual habits revealed. This also came at the time the Bush Administration was firing U.S. attorneys who weren't prosecuting enough Democrats.

Needless to say, when prosecutors go after prostitution rings, they rarely go after the clients, just the owners and the prostitutes. In contrast, around the same time, the D.C. Madam case surfaced and they only pursued the madam there, even though it was revealed that two of her clients were high-profile Republicans, including Louisiana Sen. David Vitter, who was just re-elected. He faced no legal inquiries.

Many believed that Spitzer had a good shot at being the country's first Jewish president. I just wonder if he'd been able to keep after Wall Street as he was doing, whether some of the mess that happened could have been prevented since no regulatory fixes have really been put in place to stop it since. Government of the corporations, by the corporations, for the corporations shall not perish from the United States and we the little people always will be the ones paying the price. Thank goodness we have documentary filmmakers such as Alex Gibney to do the job that journalists have long since abandoned or forgotten how to do.

Comments:
Great look at this, Ed. And your last paragraph nailed the gist of it... unfortunately. Thanks.