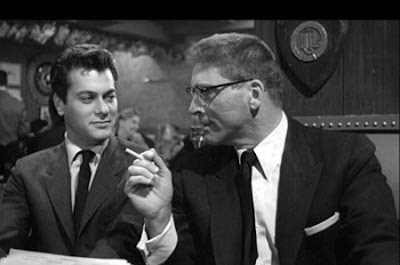 In a strange way, Tony Curtis resembled his great role (I'd argue his greatest) as Sidney Falco in 1957's Sweet Smell of Success. Not that he was overly ambitious to the point of having no scruples, but that for every bit of good fortune Curtis had in his career, it didn't quite seem to stick and now that he has died at the age of 85 though he leaves a legacy of many good performances and great films, somehow he didn't end up having the career that his talent deserved.

He made his film debut in a short film directed by Jerry Lewis in 1949 called How to Smuggle a Hernia Across the Border but, thankfully, features and real roles would come his way. The next year the former Bernard Schwartz got to join the Cavalry in a classic Western: Anthony Mann's Winchester '73 starring Jimmy Stewart, though his credit read Anthony Curtis.

Three years later, he showed his knack for escaping tight spots by taking on the title role in Houdini. Three years later, he teamed with Burt Lancaster in Carol Reed's colorful but silly circus melodrama Trapeze. The next year he and Lancaster teamed up again in what may be his best work, the wonderfully cynical Sweet Smell of Success. As a press agent in Alexander Mackendrick's masterwork, Curtis and Lancaster were a great acting twosome and they had that great Elmer Bernstein score and James Wong Howe cinematography that really brought 1950s Manhattan alive in glorious black-and-white.

In 1958, he and Kirk Douglas teamed up as The Vikings. The same year, he received his only Oscar nomination as an escaped prisoner chained to another inmate, Sidney Poitier, in Stanley Kramer's The Defiant Ones. As was the case with many Kramer films, the social messaging got ladeled on a bit too thickly, but Curtis and Poitier's realism helped to temper that aspect so the film went down a bit more smoothly.

1959 brought him the chance to work with Cary Grant twice in a way. He did it for real in Operation Petticoat. Then, in the film of his that will last the test of time most likely, Billy Wilder's Some Like It Hot, he should have earned his second Oscar nomination for essentially playing three characters: Joe, the musician on the run from the mob with Jack Lemmon; Josephine, the female character he assumes in hiding; and Shell Oil Jr., the playboy who sounds suspiciously like Cary Grant as he tries to seduce Sugar Kane (Marilyn Monroe). He's a riot in all three personas. However, the Academy only nominated Lemmon for the film.

Two years later, he had a small role in Stanley Kubrick's largely disowned Spartacus, where his most famous scene, a bathing encounter full of sexual innuendo with Laurence Olivier, was lost on a cutting room floor for decades.

The rest of the 1960s saw Curtis still work steadily but in projects less worthy of his time. He got hidden under heavy makeup as did many others in John Huston's mystery The List of Adrian Messenger; he co-starred with Natalie Wood in the adaptation of Helen Gurley Brown's best seller Sex and the Single Girl; he showed off a killer instinct as The Boston Strangler; he got to joke around with Lemmon again in The Great Race; and without him in Those Daring Young Men in Their Jaunty Jalopies.

Before The Simpsons made it a habit to have famous guest voices, Curtis' voice turned up on The Flintstones, which turned 50 today, as Stony Curtis.

His career really started to cool in the 1970s, thanks in no small part to a cocaine habit, and it led to bad film roles such as The Bad News Bears Go to Japan and lots of television, such as a regular role opposite Robert Urich on Vega$.

His last feature role of interest was probably Nicolas Roeg's 1985 film Insignificance, based on a play, where he played a fictionalized version of Sen. Joe McCarthy encountering Einstein, Joe DiMaggio and Marilyn Monroe in a hotel room.

He also appeared on a later episode of Roseanne as a frisky dance instructor who sparks jealousy between Jackie and her mother.

During his marriage to the actress Janet Leigh, they had a daughter who became an actress in her own right, Jamie Lee Curtis.

It's a shame that a career that started so strongly, sort of petered out, but Curtis left so much good material in those early years that he'll still be remembered.

Comments:
What a terrible and sad week. Sally Menke, Arthur Penn, and now Tony Curtis. A fine tribute post, Edward. May he RIP.