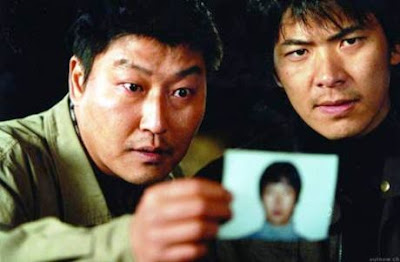 By Edward Copeland
After loving Bong Joon-ho's Mother so much, I received so many notes insisting I must see his 2003 work Memories of Murder (which didn't receive U.S. release until 2005) that I had to seek it out. I'm glad I did.

Actually, that truly isn't accurate either. Aside from being about a police investigation into a serial killer in a low-tech age, there's not much else in common between the two films other than their excellence.

Memories of Murder takes places in the South Korean province of Gyunggi in 1986 where someone is brutally raping and murdering young women. As in Mother, the detectives assigned to the case seem to find that the easiest way to solve a case is to beat, coerce or otherwise twist a confession out of the person they think most likely did the deed on that particular day.

This especially is the case with the lead cops on this case, a pair of none-too-bright bulbs, Detectives Park Doo-Man and the excessively brutal Cho Yong-koo (Song Kang-ho, Kim Roe-ha). After embarrassing the department (and getting the press sniffing around) by trying to railroad a mentally challenged man (Park No-shik), the chief (Song Jae-ho) sends to Seoul for a more experienced detective, Inspector Seo (Kim Sang-kyung), to try to help solve the most difficult case his department has ever faced.

As dim as Park is and as angry as Cho is, Seo always displays quiet contemplation, quick to dismiss the local cops' methods and theories in favor of approaching the rising body count the seemingly careful killer leaves analytically. Naturally, the tension an outsider would naturally bring to take over an investigation heats up even more than it would otherwise.

Unfortunately, whenever a break seems near, it seems to lead inevitably to a dead end, frustrating every one. When a young female officer notes that a radio station keeps receiving postcard requests to play a certain song every time it rains, an event that follows with another brutal slaying, Seo feels they've got what they need to stop the killer before his next victim. However, the chief's request to Seoul for additional manpower to spread out to stake out the province gets a big no because the country's government's priority is putting down an uprising elsewhere.

Bong moves the film at a swift pace and there aren't really twists to spoil because it does resemble Zodiac in that the mystery has no resolution. It's the effect of the crimes and the investigation on the main characters that are at the heart of Bong's film. It delivers a different sort of heartbreak as the final frustration of an early DNA result (which they have to send to America to get) doesn't return the expected result prompts an almost Persona-like transference between Park and Seo.

Memories of Murder, preceding the fun frolic of The Host and this year's great Mother, makes me want to see what else Bong Joon-ho has been up to in South Korea. I'm glad I checked Memories of Murder out, though I think Mother is the best of his three films I've seen so far.

Comments:
As far as Bong goes, what's left is Barking Dogs never Bite, his debut feature, and a short film that I wrote about last year, Influenza, which I understand has English subtitles, unlike when I saw it (although I could get the basics of what was going on).