A mother's work is never done 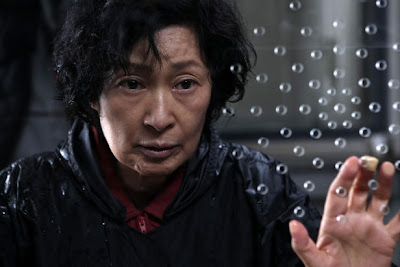 By Edward Copeland
Prior to Mother, I've only seen one of South Korean director Bong Joon-ho's films, the incredibly fun monster flick The Host. Mother could hardly be more different, but it's a film that constantly surprises, thanks to the incredible lead performance by Kim Hye-ja in the title role.

You really don't know what to expect from Mother based on the film's opening image. Over the credits, Kim stands in the middle of a field doing a strange little dance to the film's riveting score by Lee Byeong-woo, which can seem comical when the moment calls for it and the perfect accent to the suspense when appropriate.

Mother (we're never given her full name) prepares herbs and solutions in her small shop as well as performing unlicensed acupuncture on her customers. She also keeps a close eye on her 27-year-old son Do-joon (Won Bin), a young man who obviously has something amiss about him. He may be mentally challenged or just a bit slow. In the film's opening moments, Do-joon is holding up a dog across the street from his mother's shop to wave when a speeding BMW strikes him and speeds away. A horrified mother runs to his aid. Though he's slightly injured, he appears OK, but egged on by his hothead friend Jin-tae (Jin Goo), the two hop in Jin-tae's car in pursuit of the hit-and-run vehicle.

Since it was a BMW, Jin-tae assumes it belongs to well-off members of the country club, so that's where they go, finding the car, which Jin-tae smashes the sideview mirror of before the two enter the golf course trying to track down the vehicle's occupants, with Do-joon collecting lost golf balls from a water hole along the way. When they find the golfing party in the cart, a melee ensues that ends up with both parties at the police station.

The authorities urge both sides to settle, since they were both at fault, until the wealthy golfer mentions the damage to the car as well. Finally, that matter resolves itself but a worse matter rears its head when a schoolgirl with a bad reputation (one the addled Do-joon has attempted to pick up unsuccessfully) turns up slain, a golf ball with Do-joon's signature found nearby.

Mother won't accept that her son did the killing, especially when he's tricked into signing a confession, so she tries hiring a lawyer and doing her own investigating to prove his innocence. In some respects, it's reminiscent of Tilda Swinton's character in The Deep End, but Mother's actions go deeper and darker.

The twists in Bong's film often come as quite a surprise and though it has abrupt shifts in tone, they always work. He has a masterful suspense scene where Mother is hiding in the closet of someone she's investigating when the suspect comes home for a tryst with a woman and falls asleep on the floor. Mother has to sneak out of the place without getting caught and the floor is a literal minefield of water bottles and other objects she must navigate to get to the exit.

It's not often that a movie can produce reveals that take me by surprise, but Mother does it frequently and it makes for a riveting film experience.

Comments:
I hope you get around to seeing Memories of Murder. Bong's first film, Barking Dogs Never Bite is finally out on R1 DVD. An interesting film in spots, although it doesn't quite work for me. I got my DVD version of that film in Thailand, a little over three years ago.

"Memories of Murder" is simply a masterpiece.