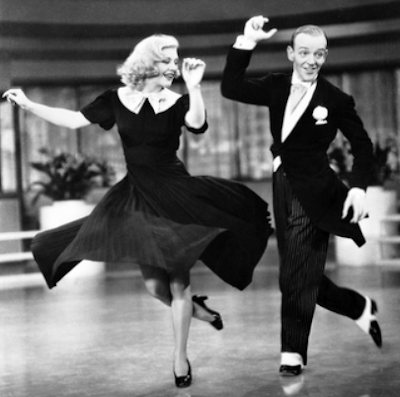 By M.A. Peel
Fred Astaire was born in the last year of the 19th century. Today, in the second decade of the 21st century, we pause for a moment to consider Swing Time — one of his greatest achievements — on its 75th anniversary.

The big assessments all are available to read: Arlene Croce’s The Fred Astaire and Ginger Rogers Book; John Mueller’s Astaire Dancing: The Musical Films; Hannah Hyman’s Fred and Ginger. There you can read about George Stevens and Howard Lindsay and all the formal calibrations and comparisons that are the world of film studies.

For myself, one question stuck in my head: What does Swing Time offer us in the 21st century?

Well, it is stunningly fresh in so many ways. It sweeps us into lush monochrome beauty, offering a respite from the glare of the colors of real life. The absurd storyline is not alien in the age of Wedding Crashers and The Hangover, not in plot points per se but in plot probability: man’s friends waylaid him from getting married because they don’t want him to leave the act, and twice — not once but twice — important things happen because characters aren't CERTAIN that men’s morning trousers shouldn't have cuffs.

Fred’s first entrance as Lucky Garnett in full wedding suit regalia sets up the distinctive tone for our time together. His uncanny ease in formal attire never loses its power: authority of place and time, conviction of character, and an understanding of the tools of his trade of dancing wrapped in genuine nonchalance. His waistcoat, top hat and spats are his second skin, and his understanding of this gives us all permission to simply enjoy the visual beauty of the lines of his exquisite suits rather than being put off by them.

Calling Judd Apatow, Jon Lucas, et al.: No one is watching Swing Time for the story, but it has charms to offer the 2011 viewer.

Lucky Garnett (Fred Astaire) has a best friend, Pop Cardetti (Victor Moore), which makes him a rich man in the important ways. But it’s 1936 and people are still reeling from the Depression.

The boys in the act take the cash Lucky gambled from them, but that doesn’t stop him. He wants to “go to New York” to make his fortune so that he can marry his fiancee. With no money for a ticket he hops a freight train. Pop runs along the train with a suitcase of all their clothes. It bursts open and they lose everything but a toothbrush. But since this is not a drama, they keep laughing. That’s part of the fantasy. In New York, they will have to talk their way into an apartment, and then Lucky tries to gamble a tuxedo off of a mark so that he go to the dance audition with Penny Carrol (Ginger Rogers). This ease in the face of serious issues — being broke — pulls you in. Yes, I want to have that much chutzpah and courage in the face of economic strain.

La Belle, La Perfectly Swell Romance: To try to capture the songs and the dance of Swing Time in words is a little painful: It earthbounds what lives on a celestial plain of motion and soundscape. But words (and YouTube) are the best we have to share the experience of this piece of art.

Pick Yourself Up: The most exuberant of the duo’s dances, perfectly punctuated by the flare of Rogers’s biased-cut dress. Astaire’s sheer lightness of movement creates a visual definition of “joyous” that never has been topped. The advice to “dust yourself, start all over again” is welcome to all ages at any age. The dance and the songs spark with optimism and confidence.

The Way You Look Tonight: The great nondanced song from the ultimate song-and-dance man. Its opening lines are in imprinted into the psyche of several generations. I love that Penny is not waitin' on no man, she’s going on with the details of life, such as touching up the dye job on her hair. Astaire needs only to sit and sing to exude his considerable charisma.

Waltz in Swing Time: One of the great orchestral pieces with big, pendulous declarative riffs which Astaire and Rogers dance around, between, amidst.

A Fine Romance: I love the snow. I love the fur coats. I love the inside joke of a “fine romance with no kisses,” given Astaire’s dislike of onscreen kissing. He said that his lovemaking onscreen was in dance. Oh yes.

Bojangles of Harlem: Fred and his three shadows. Another song with a bracing beat and an imaginative chorus line sequence. While a tribute to Bill "Bojangles" Robinson, as many have pointed out the flashy jacket is Sportin’ Life, not Bill who dressed very plainly. The challenge for some today is the blackface.

Never Gonna Dance: Even if you’d never read that this is considered the pinnacle of the Astaire/Rogers art, you would know it after one viewing. (Click here for proof.) More accessible and less fussy than Top Hat’s "Cheek to Cheek," it actually is more sophisticated and “deeper” in how it tells the whole story of “boy meets girl/loses girl/boy is crestfallen” in six exquisite minutes with a spectrum of moods, steps, and rhythms amid twinkling Art Deco splendor. Rogers’ gown is stunning: a simple satin slip dress with rhinestones crossing under the bust and across the bare back. When Rogers starts to walk away midpoint, Astaire pulls her back, just like the audience wants him too. Then the motion up the stairs to the big finish, with an amazing series of fast pirouettes from Ginger, until with one final pirouette she pivots away.

The plot then winds its way through more absurdity until Lucky and Penny find themselves with each other free and clear, with one boffo reprise singing “A Fine Romance” against “Just the Way You Look Tonight.”

You Do, Something to Me: The Astaire/Rogers team tantalizes because of how much more is their whole than the sum of their considerable and lovely parts. It’s the alchemy that happens when certain people are together: The Beatles, Vivien Leigh & Clark Gable, Crockett and Tubbs, Brangelina. There are pairings that just make people want more, want to know more, want to BE a part of the pair somehow. That phenomenon is in full force in Swing Time. Fred and Ginger are the most equal of partners; the synchronizing of their parallel steps is magical. For me, I can’t take my eyes off of Fred. For me his unfailing virtuosity overshines Ginger’s. I’m in the camp of “Eleanor Powell is a more accomplished dancer than Ginger Rogers.” But Powell never had the rapport with Astaire that Rogers did.

And so Rogers and Astaire are in a pantheon all their own. I hope that pop culture points the younger generation toward this artistry sometime in a big way. As I said, there’s lot that will make sense to The Hangover crowd, and much that would jazz them. What they might not know is just how hard Astaire worked at his art.

"This search for what you want is like tracking something that doesn't want to be tracked. It takes time to get a dance right, to create something memorable." — Fred Astaire

Comments:
Excellent tribute, Mr. Peel, for one of the extraordinary people who ever appeared before a motion picture camera. He's still my favorite song & dance man. My thanks.

Many thanks leOPard13! It's an interesting question how big of a fan base does Fred Astaire still have.

(Small point, I'm Ms. Peel. Not to be confused with the film blogger Mr. Peel!)

I really hope younger generations of film buffs will continue to discover the talent and elegance of Fred Astaire. He really was somethin'.

It's just like the silly argument of where you are supposed to choose between Keaton and Chaplin as to who is the best of the silent clowns. There's no reason you can't love and appreciate them both and I think the same goes for Fred Astaire and Gene Kelly.