Living out the unlived lives of their mothers 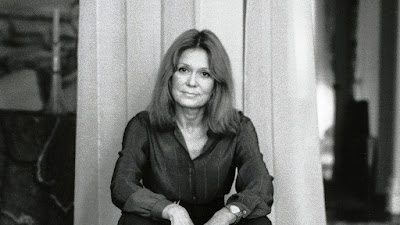 "The primary thing is not that (young girls) know who I am but that they know who they are."
Gloria Steinem

By Edward Copeland
For the final film in HBO Documentary Films' summer series, the nonfiction movie premiering is short and simple. Gloria: In Her Own Words resembles a collage more than a documentary as feminist icon Gloria Steinem's life gets briefly recounted through both new interview and archival footage.

If anything gets repeated throughout director Peter Kunhardt's film, it's the mantra of young Steinem that her commitment to the women's rights movement beginning around 1970 is about "revolution not reform" leading up to another significant historical event that's been lost to the indifference of time and piss-poor history education in the U.S.: the nationwide Women's Strike for Equality on Aug. 26, 1970, which was the 50th anniversary of women gaining the right to vote.

Sprinkled through the hour, many details caught my attention such as when Steinem first arrived in New York in the early 1960s, landlords routinely refused to rent apartments to single women, assuming they lacked the ability to support themselves. One thing that seems odd though is that Steinem said she started out wanting to be a political reporter, but that was nearly unheard of in those days when there's a long list of women political reporters that stretch at least as far back as the 1920s to Lorene Hickok at the Minneapolis Tribune and later with The Associated Press and would have included at the time Steinem sought that career Helen Thomas, who'd been covering Washington since the Eisenhower years and became UPI's White House correspondent under JFK in January 1961. Granted, inequity in pay between male and female reporters would (and still is) an issue and the women reporters had to work their way up to the jobs, but I think Steinem's comment reflects impatience that a new college graduate and novice reporter didn't immediately begin on the beat she aspired to be on, something that rarely happened to journalists of either sex.

One surprising admission from Steinem is that she based her look at the time (mainly the streaks in her hair) and her outlook on not needing a man on Audrey Hepburn's interpretation of Holly Golightly in the movie Breakfast at Tiffany's, based on Truman Capote's novel.

The documentary hits most of the highlights in Steinem's career and life such as going undercover as a Playboy Bunny in one of the Playboy Clubs and how her 1963 article on the experience basically made her career. It also explains her transformation into an activist when she talks about the abortion she had at 22 but never told anyone about. When she covered a hearing in 1969 where women were demanding the right to have one and Steinem realized that 1 in 3 women either had received an abortion or needed one and she questioned why safe, legal procedures were denied. Soon after, Gloria Steinem the activist was born.

In the archival footage, what took me by surprise was how blatantly many of the big-name newscasters of the day such as Harry Reasoner and Chet Huntley mocked the women's movement or Ms. magazine. When Huntley previews the upcoming Women's Strike, he actually says that the women who are involved "want to be men." Reasoner does a commentary on Steinem's Ms. magazine after it publishes its first issue, predicting it won't last because they've exhausted all the possible topics in the first issue. To Reasoner's credit, when Ms. does end up persevering, he does return to the air with another commentary admitting he was wrong in predicting its demise.

Gloria: In Her Own Words hardly qualifies as a probing, groundbreaking documentary, but it is an informative hour about a woman who made her mark in late 20th century history. It premieres Monday on HBO at 9 p.m. Eastern/Pacific and 8 p.m. Central.

Though a busy schedule and some health issues forced me to miss three installments (Sex Crimes Unit, Hot Coffee and Citizen U.S.A.: A 50 State Road Trip) of the summer documentary series, with a few exceptions, most of the films turned out to be good and, in some cases, magnificent. To close the series, I thought I'd rank the films I saw.