A chef who doesn't cook is a miserable chef 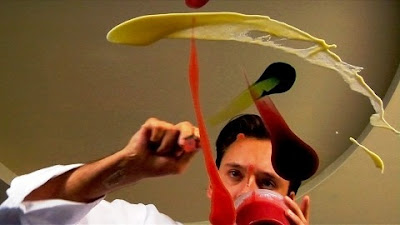 By Edward Copeland
The second in HBO's summer series of Monday night documentaries, A Matter of Taste: Serving Up Paul Liebrandt, covers nearly a decade in the up-and-down career of one of New York's youngest, most daring chefs who, at 24, became the youngest chef to helm the kitchen at a restaurant to receive three stars from The New York Times. However, a dispute with the owners over the menu got Liebrandt dismissed a few months later, forcing him to take a job at a small bistro. "I'm not a lunatic, I'm an artist," Liebrandt tells the camera early on. That first-time director Sally Rowe manages to cover these years in barely more than an hour proves to be as amazing as some of Liebrandt's creations look. The documentary debuts Monday night.

Anyone who watches Treme will have a hard time not thinking of the series' fictional chef Janette Desautel (Kim Dickens) and her rocky road in the culinary profession from the closing of her own New Orleans restaurant to her journey this season through the kitchens of the same type of high-class New York eateries in which Liebrandt practices his art. (In fact, one of Janette's employers this season, Eric Ripert, the executive chef/co-owner of New York's Le Bernardin, appears as an interview subject in the documentary.)

Liebrandt was born in Zimbabwe and raised in London and through books became fascinated with cooking early and, when he went to France, found that most French chefs actually mostly did the same things. He viewed cooking as an artistic endeavor and finally found one chef who did inspire him in that way before moving to New York to try to make his mark there. His mentor approached dishes the way that Liebrandt wanted to: Namely taking familiar tastes and then adding a twist by removing an element here or adding another one there.

This approach was what earned Liebrandt that 3 star rating from William Grimes, New York Times' food critic at the time, while he worked at Atlas where his bold inventions such as chocolate covered scallops, espuma of calf brains and foie gras and beer and truffle soup. However, when a few months down the road, Liebrandt and Atlas' owners reached an impasse about the menu, they let him go and the celebrity chef, the subject of huge magazine spreads, ended up working at the small bistro Papillon.

Liebrandt found plenty of room to experiment there as well, earning a respectable 2 stars from Grimes who said "he needed a bigger show." When the economic fallout of the 9/11 attacks forced the restaurant's owners to cut costs and change the menu to more modest fare such as burgers and fries. Liebrandt tried to stick it out for awhile, but the limitations finally proved too frustrating and he had to leave.

The documentary continues to chronicle his travails through two more restaurants, one at a hotel and one starting from scratch in which he'd be a co-owner. It also details the change in the game when The New York Times switches food critics from Grimes to Frank Bruni, someone with much different tastes than Grimes, and it shows how restaurants try to outwit the Times, who try to send their critics in anonymously and unexpectedly.

It also shows how life in the kitchen of a restaurant at that level pretty much becomes your entire life. Early on, Liebrandt tells of women who have seen profiles of him and call asking if he's single to which he responds, "Sorry, I'm married to my kitchen." Eventually, Liebrandt does manage to snag a girlfriend, but it's tough for all the kitchen staff. One of the workers in the startup restaurant, who regularly put in 18 hours a day, admits that his work life is going well, but the rest of his life is another story since he can't get to his bank or do other things he has to get done.

Director Rowe certainly has an interesting resume to come up with this film, which took more than a decade to make, as her film debut. She had some work as an apprentice editor, assistant and editor, but the bulk of her work has been as a script supervisor for commercials and, though it would seem far removed from this subject, the entire run of Chappelle's Show.

Rowe has made a fascinating look at one of the top culinary warriors and gives viewer an inside glimpse of life inside New York's haute cuisine industry. A Matter of Taste: Serving Up Paul Liebrandt debuts Monday on HBO at 9 p.m. Eastern/Pacific and 8 p.m. Central.