Whose honor is it anyway? 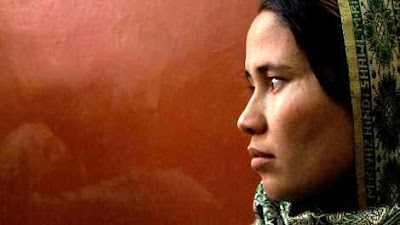 By Edward Copeland
Truly, you can't judge a book by its cover — or a documentary either. When I read the title of the latest in HBO Documentary Films' summer series — Love Crimes of Kabul — and its unofficial subtitle — "Behind the Walls of Badam Bagh Women's Prison" — images filled my head of another depressing look at torture and inhumane practices in a society trapped beneath the strictures of centuries-old rules and mores of Islamic Sharia law despite Afghanistan's supposed "liberation" by the United States who, so the fable goes, gave the country freedom by way of bullets, bombs and a hand-picked leader who, at best, is corrupt and, at worst, secretly deals with the Taliban, works against the U.S., is addicted to cocaine and has a drug kingpin for a brother. So color me surprised when Love Crimes of Kabul turns out to be nothing like I expected. Iranian-American filmmaker Tanaz Eshaghian gained amazing access to the inmates of the women's prison awaiting trial for various "moral" crimes, but Eshaghian focuses on three women. The women, as well as other people in the film, turn out to be such vivid, colorful personalities that if this were fiction, you’d have a hard time buying it. In fact, some of the women prove so fascinating that you enjoy the film and forget they face years in prison for premarital sex, adultery and running away from home.

The Badam Bagh Women's Prison (spelled Badum in the film though all promotional material spells it Badam) houses 125 women. About half of the inmates are being held for real crimes such as murder, drug smuggling or attempted suicide bombing. The other half all are being held on moral charges such as premarital sex, adultery or running away from home, the argument for the latter being that no one runs away from home with someone or to someone unless plans for a sexual relationship are involved.

As restrictive as Afghan society remains in its adherence to Sharia Law, Love Crimes of Kabul turns out to be revelatory by allowing Eshaghian such intimate access to the inmates and workers at the women's prison and how open everyone caught in legal quagmires over what would be absurd in Western culture turns out to be. The documentary presents the viewer in a bit of a moral quandary: It seems almost heartless to say that you enjoy Love Crimes of Kabul almost on an entertainment level, but that's how I viewed it though I consciously knew that the oppression of women and the suppression of love that lies at the heart of its story. It's not that I'm just a cold-hearted bastard, but the women Eshaghian chose to focus on makes the film palatable and compulsively watchable. It makes me wonder if the oversize personalities she selected result in a documentary that's compelling as viewing but undermines the larger issue of the unjust and outrageous incarceration of these women.

Of the three women at the center of Love Crimes of Kabul, the most sympathetic is the 18-year-old girl Sabereh, left of photos. She was turned into the authorities by her father when he found her kissing a 17-year-old boy in a closet. Since the boy isn't an adult, he's put in the children's jail. The tragedy of her case stems from a doctor's medical examination which proves that her claims that they didn't have sex is true as the exam indicates Sabereh's virginity remains intact. However, she's still incarcerated, awaiting trial for the crime of falling in love and possibly committing sodomy. As one of the women officials who run the prison says, "Women are given too much freedom." She later adds that "Anal sex is worse than adultery." It doesn't matter that the girl's father lied about what he saw. Surprisingly though Sabereh keeps a rather cheery outlook because not only does she know she's in the right, she loves the boy and hopes the legal problems will lead to their marriage. It seems that most of these cases, which end up with hearings in two courts: Family and Criminal, often get resolved by having the accused parties wed. The woman pictured to Sabereh's right, Kareema, 20, starts the documentary much like Sabereh in terms of giddiness and lovesickness for her man, but the transformation of her character truly powers the film and is one of the main reasons it's so jaw-droppingly engaging.

Kareema's relationship with Firuz started, according to her, when he started chasing her, but she found him cute and before long they were sneaking off for trysts. Kareema wanted Firuz to marry her but he wasn't interested, partly due to her character in general but mostly due to pressure from his parents who disapproved of such a relationship since they belong to the Pashtun tribe and Kareema is a member of the Hazara tribe. "Everyone should stick to their own people," Firuz's mother says. As a result, Kareema turned herself in to the authorities for having premarital sex, which also sends Firuz to jail, hoping to force him into marriage. Interviewed in Kabul's Men Prison, Firuz admits he wishes he never met her. His father paints a 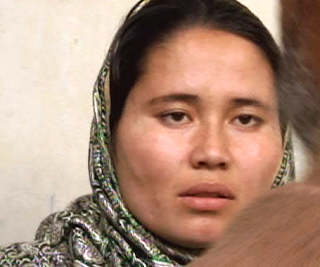 picture where Kareema was the pursuer, sneaking into Firuz's bedroom at night to seduce him. "No one in her tribe wanted her. She's not worth what she wants," Firuz's father complains during negotiations on what sort of payment Firuz's family will make to Kareema's in order to marry her. Things grow more complicated during her prison stay as Kareema discovers she's pregnant and becomes obsessed with what money can be made from the deal when it becomes clear Firuz isn't in love with her. As much as Firuz's family hates her, Kareema's own seems just as ashamed of their daughter's actions. Just reading a dry description of the tale makes the tragedy and sadness of it come through, but watching the documentary, Kareema turns into such a piece of work that you're too dumbstruck watching her actions to feel sorry for her as she argues in court for Firuz to give her $30,000 before the marriage in case he ever wants to divorce her. After the court-forced wedding as Firuz sits unhappily next to Kareema, she spitefully says, "This son of a bitch still hasn't learned his lesson. You thought I was kidding? You thought you'd get away with it?" Her transformation even takes on physical attributes, granted that's due to the pregnancy, but it makes sense that the smiling, lovestruck young woman of the beginning should also look different as she turns into the grasping shrew of the later stages of the film.

The third woman the documentary focuses on is Aleema, 23, a divorced woman who lives at home again with her parents. When the abusive living arrangement becomes too much, Aleema flees, taking refuge with a

woman named Zia. As becomes the case with all these charges and trials, business deals end up at the core of everything as Zia tries to sell Aleema to an undercover cop, who arrests both women. Sharing the same cell at the jail, Zia and Aleema fight over Aleema's marital future. A furious Zia demands that Aleema marry her son to make up for the imprisonment, but Aleema refuses because she knows Zia can't afford the dowry she feels she deserves and knows her son can't provide the lifestyle she covets. Aleema thinks Zia wants her for her son because she can get her cheap because of her "shame." No details really are provided about what happened to Aleema's first marriage, though when Kareema demands her money from Fariz in Family Court a title card informs us that "Under Sharia Law, in the event of divorce, a woman has the right to money from her husband to make it difficult to divorce." At one point, a social worker visits Aleema and says, "A bad husband is better than no husband." Zia gets advice as well, hers coming from the female head of the jail who reminds her of an old saying, ""Keep away from broken walls and harlot women."

Something I feel Love Crimes of Kabul lacks is a more thorough explanation of Sharia Law's attitude toward divorce. Just the fact that it allows divorce and remarriage at all seems out of step with its other moral edicts such as forbidding children, no matter how old, from running away from home. Sharia may try to discourage divorce with the money demand, but when you consider that divorced Catholics can't take Communion or in Hinduism it used to be universal (and still is in some parts of India today as shown in the great film Water) for widows, no matter how young, to be sent to live in group homes as virtual slaves or prostitutes.

While Sharia Law continues to rule Afghanistan, you definitely see how "modern ideas" have crept in to the minds of the younger generation of women. When a woman is released from jail, she has to be reminded to put her burqa on since within the walls, all the women act very casually with no men on the premises.

We've all heard the horror stories of areas where the Taliban have regained territory and practiced real horrors on women doing such "modern" things as going to school, so it gives me pause when I say a great deal of Love Crimes of Kabul comes off as funny simply because the stakes don't seem as high and the situations come off as humorous instead of harrowing. It might not be the worst kind of oppression, but it's still oppression. I just can't decide who should feel worse — me for enjoying Love Crimes of Kabul or producer-director Tanaz Eshaghian for making the documentary in a way that it could be enjoyed.