Each frame a little grayer than the one before 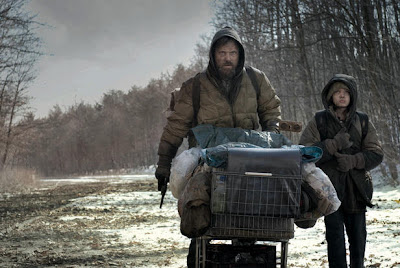 By Edward Copeland
I have a defect as a moviewatcher and a critic. While I hold no bias against the dramatic or the serious, there must be some element of relief within them, usually some levity here or there, to offer a release valve before the going gets so oppressive that I get bored or my mind wanders (I think it explains my aversion to the films of Terrence Malick — he strikes me as someone who has never laughed in his entire life.) Sometimes movies such as these will offer some undefinable magic that makes the package work anyway, to offer welcome pause from the bleakness of their nature, but unfortunately this is not the case with The Road.

Don't misunderstand what I'm saying. I'm not asking that Steven Spielberg insert a few kneeslappers when he makes a Schindler's List or that Alain Resnais toss some slapstick into Last Year at Marienbad, yet I adore both films. It's just that some films go so deeply into the morass that the pain they depict translates into viewing that requires cinematic Vicodin of some sort.. It reminds me of the story I heard from a critic friend following a screening of The Hours when one of the writers stood up and said (quite appropriately, I believe), "Cyanide capsules for everyone?"

Granted, a film such as The Road, based on Cormac McCarthy's novel about a post-apocalyptic America, doesn't start with a premise that allows for much in the way of hope, let alone levity. Though it's never stated explicitly, one assumes that we are witnessing the few surviving stragglers of a nuclear holocaust, focusing on a father and his young son (Viggo Mortensen, Kodi Smit-McPhee) as they try to persist, wary of any strangers who might feel other survivors threaten their own continued existence.

The father and son struggle with a few meager belongings they lug in a shopping cart, searching for food and clinging closely to the father's gun and its remaining two bullets. In flashbacks, the father recalls his now deceased wife (Charlize Theron).

Directed by John Hillcoat and adapted from McCarthy's novel by Joe Penhall, the film unfolds, as one would expect, as a series of vignettes only, with rare exceptions, they aren't very interesting vignettes and it just adds to the film's feeling of ennui. The two episodes that stand out most are when the pair encounter an old man (well played by the always reliable Robert Duvall) and the film's briefest glimmer of hope when they discover a bomb shelter fully stocked with canned goods.

Unfortunately, those moments are rare ones and as the father and son continue on their long walk to nowhere in particular, you begin to feel as if you've been walking for miles as well without a destination in mind. It's not that the movie's points aren't spelled out loud and clear, it's just that the message gets weighed down by the burden of the film's gloom.

Mortensen does fine as the father but in a way he's almost upstaged by the young Smit-McPhee whose character, despite the horrors he's witnessed, manages to maintain some of a child's innocence even as he's forced to mature and question some of the decisions his psychologically scarred father makes.

Having not read the novel, I'm curious as to what novelistic magic McCarthy worked on the page because the filmmakers certainly didn't conjure any on the screen, at least as far as I'm concerned.

Comments:
I felt that the difference between the novel and the film (which was very faithful to it) was that McCarthy captures the essence of the father son relationship very movingly. In fact, that was the major driving force of the book.

As good as the actors are, the film fails to really establish that bond anywhere near as well.

FWIW, here's my full reaction to The Road posted when it came out:
http://www.slantmagazine.com/house/2009/12/a-boy-and-his-dad-the-road/