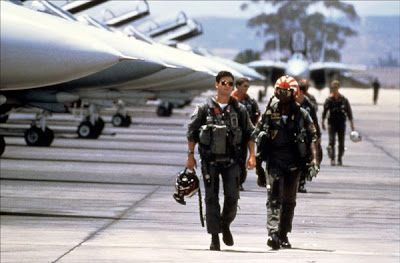 On March 3, 1969 the United States Navy established an elite school for the top one percent of its pilots. Its purpose was to teach the lost art of aerial combat and to ensure that the handful of men who graduated were the best fighter pilots in the world.

The flyers call it:

By le0pard13
If you were born during the 1980s (and a good number of you reading this were), congratulations. You entered this world when action movies really came into their own in Hollywood — I also have ties older than many of you, but that's besides the point. Apparently, actor Tom Cruise began his meteoric rise on screen at the same time. And pretty much both coalesced in one breakthrough film, for better or for worse. 1986's Top Gun, released 25 years ago today, was that development, and we've been living with its effects ever since.

If the 1970s offered up the rise of the antihero in cinema (The French Connection, Get Carter, Taxi Driver, etc.), then the '80s were the reflexive kickback. The Me Decade presented us with the last of the Vietnam War, Watergate and more than one oil crisis for good measure. A dim aftermath in people's lives was to be expected. Of course, film folk seized upon the lethargy and the economic repercussions with an unmatched creative gusto in that same period (still and all, let's just agree here and now to not discuss disco). Whatever doldrums and cynicism the '70s decade left behind, however, films of that subsequent period seemed to relish in jolting that out of moviegoers.

Action film is a film genre where one or more heroes is thrust into a series of challenges that require physical feats, extended fights and frenetic chases. Story and character development are generally secondary to explosions, fist fights, gunplay and car chases.

Top Gun is likely the slickest exercise in both '80s reverie and taking the action movie up a big notch. Who cares if they were empty calories? I mean, Reagan was president, tax cuts and military spending went way up and all was well in the world (even if we became more of a debtor nation during this time and the threat of the Cold War going hot still hung in a precarious balance). We were back, baby! Nothing was going to dispel that notion with this film, at least for two years until John Carpenter let the cat of the bag with They Live, but I digress. And the All-American producer tandem of Don Simpson and Jerry Bruckheimer assembled a mighty force to deliver a film worthy of that unique period of time.

You may think the conglomeration of Tom Cruise, a young Tony Scott serving as director and a cast of the best groomed man flesh in Hollywood at the time achieved box office greatness by their mere presence on the set. I mean was there ever a handsomer lot than Tom, Val Kilmer, Anthony Edwards (with hair no less), Rick Rossovich (who offered the best beach pose ever in a movie), and young faced Adrian Pasdar, Tim Robbins and other magazine model wannabes sprinkled among the cast of movie aviators? You'd think all of that made it auspicious, but you'd be wrong. The single most important thing Don and Jerry ever did to make this film a success (and it was the top-grossing movie for 1986) was bringing the Department of Defense into the gig.

Without the DoD's involvement, none of the best parts in the film would have ever made it to celluloid. Period. Want to nest your camera operators on a aircraft carrier or have real Top Gun instructors execute wicked dog fights around Miramar Naval Air Station or perform split-S maneuvers with abandon in real aircraft before your cinematographer's lenses? Just ain't happening without the Pentagon's OK. I give credit to director Scott's commercial television experience in framing it slickly though (along with the film's wonderfully iconic '80s soundtrack matched across its scenes) but none of the following would be half as good without access to the real Naval hardware:


The story of Maverick (Cruise) and Goose (Edwards) making their way to Fighter Weapons School is not the best example of story or Hollywood screenwriting [*cough* stupid... my wife's mutter), but then again, audiences don't come to summer action movies for character development, yet there has to be some dialogue with a little snap ("You live your life between your legs, Mav."). Still, there were enough crowd-pleasing and predictable moments to keep scenes moving along till we got to the next F-14 aerial sequence. Though it should be noted, even with the beautiful Kelly McGillis and the cute-as-a-button Meg Ryan in the cast, the spotlight here is on the men throughout this film. The macho vibe in evidence is at a Spinal Tap eleven.


"The plaque for the alternates is down in the ladies room."

Additionally, Tony Scott imbued Top Gun with a MTV-like flash which naturally drew a younger audience into the mix. That, along with his penchant for saturated colors and neon lighting (but before his more frenetic camera style and editing extremes manifested themselves), countered the grim and grit of the previous decade's film fare. It was dazzling by comparison. Plus, he had at his disposal a young Tom Cruise cresting in popularity. Although, I can't say his on-screen chemistry with McGillis matched anything close to that of his chumming around with his Radar Intercept Officer Goose or sparking up against his nemesis aviator Ice Man (Kilmer).

For better or worse, Top Gun set a standard 25 years ago in the '80s for star power, action formula, and box office results, especially for those not named George Lucas or Steven Spielberg. Blockbuster thrillers such as Jaws and sci-fi fantasies (Star Wars) from the previous era would have another genre vying for summer movie glory from here on out (though it could be argued the debut of Raiders of the Lost Ark really heralded it all five years earlier). Yet Top Gun 's heavy-duty use of real military apparatus brought another distinct aspect all of those films lacked. From this point forward, because of Top Gun 's success, studios and the military got even more buddy-buddy. Each had something the other wanted.

Our armed forces didn't begin a liaison with Hollywood with this film (that goes back to World War I), but it did reach a new level. From this point, filmmakers who wanted greater access to the same toys Paramount got to use, and could boast of an authenticity they were selling to the movie public (who now had more of an appetite for such things since Vietnam was so "last decade"), did so. And in exchange for more influence in film production, the Pentagon (who received more favorable light during the Decade of Excess) got an indirect boost to recruiting efforts whenever they became more involved. According to the Navy, aviator recruitment went up 500% after Top Gun was released. You still see all of this in play today, in fact (the latest being Battle: Los Angeles).

Top Gun arrived at a perfect time and place that guaranteed success. It fed into the public's need to rebound from a decade most of that generation wanted to forget ever happened. And it did so in an escapist style that studios continue to emulate (hint: combat accuracy needn't apply, if you've got the hardware to back you up). It could be just me, but did I spot a Pete "Maverick" Mitchell-like swagger to Chris Pine's James T. Kirk (right down to the bike he rides) from the recent Star Trek reboot? Hmm... The film's jet wash is still making waves two and a half decades later. Of course, all of this context is mute, if you happen to believe Quentin Tarantino and Roger Avary's subversive take of Top Gun in the film Sleep With Me. Makes that last shot of those two F-14s flying off toward the sunset together something else entirely.

Comments:
Excellent look back at this film. Not a huge fan of this one by any stretch but I will cop to seeing this when it came out (much like every body else in the free world at the time). I dunno. For me, it hasn't aged all that well but it is a pretty accurate snapshot of '80s action excess more than any other one I can think of. The Bruckheimer/Simpson label really ruled back then (along with Joel Silver as well) and seemed to be able to crank out one megahit after another. Nice look back!

Thanks for the kind words, J.D. I'd agree is hasn't aged that well, but it really brings back its era on viewing. As I mention at my blog, it was interesting to see his early work in this blockbuster compared to his later daring, experiments in stuff like Domino, which you so expertly examined last week. Thanks, my friend.

The memory I always think of with Top Gun (other than the fabled "blue tongue" scene that young teens liked to giggle about) was years later when I wrote a bad review of Free Willy, mentioning a terrible performance in it given by Michael Ironside and getting an angry letter from a reader who was outraged that I could say such a thing about Ironside who, after all, "was in Top Gun!" I guess that man thought being in Top Gun was the equivalent of canonization or something and nothing bad could ever said again about anyone associatied with it, only no one gave me the memo.

That's a good one, Ed. I think Mr. Ironside does have a loyal following for some of the memorable roles he's successfully pulled off (Free Willy, notwithstanding). As I mentioned today, my friend Will insists it’s:

Not quite as quotable as Monty Python, but it does have that certain call-and-responsiveness that serves as a bond for all of us that saw it at an impressionable age. There's "the need for speed," but also "sorry, Ghost Rider, the pattern is full" and "ya big stud, take me to bed or lose me forever!"

And you know of course that Top Gun invented karaoke.

Excellent point, VB. Thanks for adding to this.