The sun may not come out tomorrow 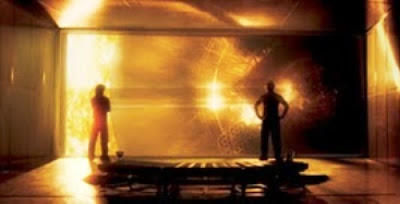 By J.D.
In some respects, Danny Boyle is Britain’s answer to Steven Soderbergh — a filmmaker who moves effortlessly from independent to studio films and works in a variety of genres: gritty drug drama (Trainspotting), kids film (Millions) and edgy horror (28 Days Later). Like Soderbergh’s Solaris (2002), Boyle has tried his hand at science fiction with Sunshine (2007). It was critically lauded in England as a thinking person’s genre film but was met with mixed critical reaction in North America and lackluster box office.

Sometime in the far future, our Sun is dying. The Earth is in the grips of a solar winter and the only chance we have for survival is to reignite the star. A spacecraft called the Icarus II, with a crew of eight and carrying a nuclear bomb roughly the size of Manhattan, will hopefully kick-start the Sun and save humanity.

On the way there, they pick up a distress beacon from Icarus I, an earlier expedition with the same mission but that had mysteriously disappeared en route. Do they alter their course and check out the ship in the hopes that they can use its bomb and thereby doubling their chances? The decision lies with the ship’s physicist, Dr. Robert Capa (Cillian Murphy) and it is one that will affect the entire crew in ways they can’t yet imagine.

Through a series of intense situations brought on by unforeseen complications, there’s a real possibility that the Icarus II may not make it back alive and the characters have to realistically deal with this chilling realization.

Sunshine starts off as an intellectual science fiction film a la 2001: A Space Odyssey (1968) and then shifts focus to an engrossing mystery involving the Icarus I and shifts again to a slasher film reminiscent of Event Horizon (1997) for the last third. This last shift has drawn the most criticism from reviewers and does test the film’s credibility. Do the filmmakers really need to add even more danger for the protagonists to face? Isn’t the fact that they are heading straight toward the Sun with limited resources and crew challenging enough?

Sunshine does an excellent job showing the dynamic between the crew members and how it gradually breaks down when things go horribly wrong. They end up turning on each other and an oversight or miscalculation has catastrophic effects. The cast is uniformly excellent and refreshingly absent of big name movie stars. Instead, we get solid characters actors such as Cillian Murphy (The Wind That Shakes the Barley), Rose Byrne (28 Weeks Later), Michelle Yeoh (Crouching Tiger, Hidden Dragon) and Cliff Curtis (Bringing Out the Dead). Some of them are cast wonderfully against type and others, such as Chris Evans (Fantastic Four), show previously unseen depth.

It is also nice to see the characters solving problems with reason and intellect that actually makes sense. That’s not to say that Sunshine is all brainy posturing. There is plenty of intense, visceral action that is

emotionally draining much as Boyle did with 28 Days Later (2002). As he showed with that film and his debut, Shallow Grave (1994), he certainly knows how to ratchet up the tension. This also is a visually impressive film as Boyle not only shows off the usual iconography of the genre — spacecraft, spacesuits, etc. — but doesn’t fall into some of the more tired clichés, like aerodynamically-designed spacecraft and evil computers. He also doesn’t telegraph who lives and who dies which gives the film an edgy unpredictability. At times, it feels like Sunshine wants to be the 2001 for the new millennium but then the slasher film elements creep in and it resembles a more traditional thriller. It’s too bad because up to that point, Boyle’s film is a very smart, thought-provoking piece of speculative fiction.

Comments:
Sunshine is a curate's egg. A wonderfully crafted egg, for sure, but because it crosses those genres so seamlessly, I think it left everyone with a problem of how to market it. The final third is a bit overdone, I totally agree, and doesn't quite make sense to me how the slasher part could actually come about (trying not to spoil here). It's a great film, but somehow you come away feeling a bit.... empty? 8.5/10 my personal score tho.

I agree with your feelings of emptiness. The film is so good right up until that last third and then it loses its mind! Weird. But I still really do like this film a lot, esp. for the attempt of making a serious science fiction film.

I like this movie too tho the slasher part is a bit off...but as a whole,it's really good.

The scoring was also awesome.