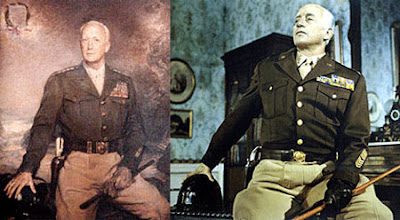 By Matt Maul
Near the end of the 1970 bio-pic Patton, released in the U.S. 40 years ago today, the larger-than-life title character, Gen. George S. Patton Jr., is shown having his likeness captured on canvas. The painting session is interrupted when the volatile old cavalryman has a heated phone call with a superior where he loudly declares that the large American troop presence in Germany should be used to take on their next military adversary, the Russians. Flabbergasted, the higher-ranking general on the other end of the line slams down the receiver exclaiming, “You’re mad!” Patton sends the artist away declaring that no one will be interested in a portrait of a madman.

I’ve often thought that the filmmakers staged this scene as a subtle commentary on their own approach in bringing Patton’s story to the big screen.

The unabashedly patriotic Saving Private Ryan and Band of Brothers present World War Two as a just war fought by Americans Tom Brokaw tagged as "the greatest generation.” In the hands of director Franklin J. Schaffner, Patton does celebrate the fight to defeat Hitler in Europe. However, the film, made while the nation was conflicted by Vietnam, is a bit agnostic about Patton’s status as a full-fledged hero. While Patton is not as cynical as Kelly’s Heroes, it’s no flag-waving Sands of Iwo Jima either. Like a painting, Patton allows different viewers to walk away with diametrically opposed reactions to the same image.

For instance, consider the famous opening scene where Patton is giving the troops a pep talk against the backdrop of an enormous American flag. The dialogue was assembled from actual speeches Patton gave during that time and certainly presents a spirited view of American tenacity. It's a great example of motivational speaking that never fails to strike a chord in those with pro-military sentiments (and perhaps some without). On the other hand, the sheer audacity of the ever-present flag is almost, but not quite, over the top. Patton is bedecked in full military drag — his uniform accurately displaying the many decorations earned throughout his career. However, instead of ribbons representing those awards (which would be the correct way to display them in that setting), the actual full-size medals themselves adorn his jacket. One can see how this iconic scene lends itself to parody in countless movies and television shows satirizing uber-patriotism.

Penned by Francis Ford Coppola and Edmund H. North based on Ladislas Farago’s Patton: Ordeal and Triumph and Gen. Omar N. Bradley’s A Soldier's Story, the film focuses strictly on Patton’s campaign in Europe during World War Two. A fictitious German intelligence officer provides a number of info-dumps throughout the movie that efficiently fills in Patton’s backstory.

Like other Schaffner efforts such as Planet of the Apes and Papillon, Patton doesn’t quite hold up under too close a scrutiny. There are certainly some great moments. Such as when Patton, armed only with a sidearm, fires on a strafing German fighter plane as bullets land harmlessly between his legs. Pure Hollywood. But nonetheless entertaining. However, the final result is slightly less than the sum of its parts. As depicted, Patton’s final push across Europe practically (and almost melodramatically) seems to credit the general with single-handedly winning the war.

Patton’s saving grace is George C. Scott. Robert Mitchum turned down the role famously stating that he felt the movie needed an actor, such as Scott, who would fight for the character and not become a supporting player for tank battles shot on location. The real Patton had a high-pitched voice and compensated with a gruff exterior and salty language. Scott seems to base his interpretation of Patton on the persona the general affected for the benefit of his troops. He would have deserved that year’s Best Actor Oscar for the aforementioned opening scene alone. But Scott goes on to create a character that walks a fine line and leaves it up the viewer to decide if Patton was an honest-to-goodness American hero or a severely flawed warrior with delusions of grandeur. One interesting historical omission in the film is a reckless suicide mission Patton sent a raiding party of about 300 men on to liberate a POW camp at Hammelburg, where Patton's son-in-law was held. While it was probably omitted for time, part of me wonders if the moviemakers didn't want to tip the scales too conclusively.

Honoring James Cagney for winning the very first AFI Lifetime Achievement Award in 1974, George C. Scott quoted a description written about Gen. Robert E. Lee: “he was what he seemed to be.” My uncle served under Patton in the war and delightfully declared Scott’s portrayal as “spot on.” Of course, this reflects his reaction to the character the real Patton had crafted for public consumption and faithfully recreated by Scott. For, unlike Lee, Patton wasn’t what he seemed to be — whatever that was.