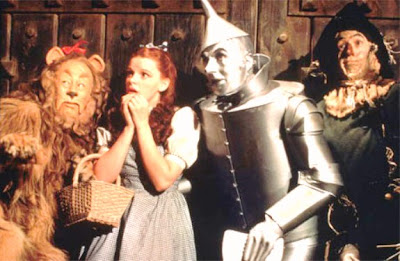 In his invaluable reference book Guide For the Film Fanatic, movie historian Danny Peary remarks on The Wizard of Oz (1939): “The effect that this Hollywood classic has had on Americans cannot be overestimated. Its influence on filmmakers alone is profound: it’s often joked that every film since 1939 includes some reference to it, and I’m not so sure this isn’t true.”

Carrying this gag a bit further, you could state that Oz references are featured in films that run the gamut from A (Alice Doesn't Live Here Anymore [1974]) to Z (Zardoz [1974]). It has certainly garnered attention in movies that include The Philadelphia Story (1940), Sullivan's Travels (1941), The Producers (1968), Brewster McCloud (1970), The Rocky Horror Picture Show (1975), A Christmas Story (1983) and Wild at Heart (1990), just to name a few of the better-known and/or offbeat. The Wizard of Oz celebrates its 70th anniversary today; a magical, mesmerizing feature film that was released in Hollywood’s “golden year” — and if anyone is up for an argument, a far more worthy candidate for 1939’s highest honor (the best picture Oscar) than the overstuffed, overpraised and outdated champion, Gone With the Wind. 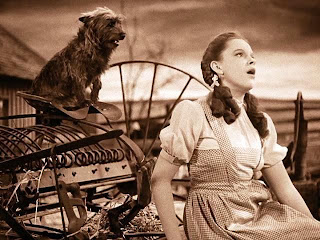 On a recent “quiz” administered at Sergio Leone and the Infield Fly Rule, participants were asked to name their “favorite moment in three-strip Technicolor.” There were a range of different responses and opinions, of course — but many of the answers were remarkably similar, noting “When Dorothy opens the front door of her transplanted Kansas home and sees Oz for the first time.” It is inarguably an amazing moment, as the drenched-with-every-hue-in-the-rainbow Oz reveals itself to be a much more fascinating place to visit than drab ol’ sepia-toned Kansas, which looks as if you’d expect the Joad family to come driving up any minute now, asking for directions. In a lengthier essay on Oz for his book Cult Movies, author Peary makes the dead-on observation that L. Frank Baum’s classic children’s novel has been refashioned into an allegory on the pitfalls young hopefuls might experience on their way to Hollywood (Oz). Nothing but the best intentions from screenplay authors Noel Langley, Florence Ryerson and Edgar Allan Woolf to be sure — but this adult propaganda is revealed to be a load of hooey in the end; once the Wicked Witch of the West has been dispatched, Oz looks to be a breathtaking, magnificent world — who in their right mind would go back to Kansas to spend the rest of their days cooped up with an unsupportive and colorless aunt and uncle? 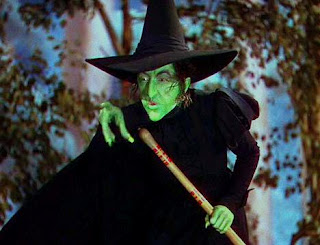 There’s wonderful dialogue (humor as well as suspenseful drama), musical numbers and characterizations in Oz, which may be why many have often proclaimed the picture as the definitive family film — and I’d be willing to bet dollars to donuts that it was the first movie many individuals my age saw growing up as a kid, owing to its traditional yearly appearances on the cathode ray tube. Judy Garland (16, but strapped into her dress and made to pass as 11 years of age) is positively aces as young Dorothy, and she’s matched by a peerless supporting cast containing the likes of Ray Bolger, Jack Haley, Bert Lahr, Frank Morgan, Billie Burke and Margaret Hamilton. (Garland — who won the role when it was decided that Shirley Temple’s vocals were inadequate — was awarded a special “mini Oscar” for her performance.) All these actors/actresses create memorable characters that will remain in the memory for possibly a lifetime. Oz also is a prime example of what Turner Classic Movies might call “what to cut and what not to cut.” The “Jitterbug” number (originally considered as a subplot in the film) was thrown out (it was felt it wouldn’t date well…and it didn’t) — but saner minds prevailed when it was suggested that "Over the Rainbow" be excised as well. (Cutting "Over the Rainbow"? Unspeakable! It was responsible for one of the film’s Oscar wins — the other being best original score.)

The last time TCM ran The Wizard of Oz was back in July, and I sat down to watch some of it with my niece who was visiting from Iowa. I watched her as she sat watching the film, completely hypnotized by Oz’s “magical spell.” I remarked to my mother in a low register, “She really gets a kick out of this, doesn’t she?” Her whispered reply: “Sometimes I don’t know who enjoys it more: you or she.” Hey…I’m always up for a trip to see the Wizard.

Comments:
I feel so fortunate that several years ago I actually got to see a good print of this in a movie theater. It's sad that the opportunity to see films that came out before one's lifetime projected are so rare anymore. Oz will also always hold a special place in my heart as one of the few things on TV that ever held my late dog Leland's attention. I don't know if it was the music, but she sat there and watched the TV for nearly the entire time the film was on.

Beautifully written. A tad harsh on Gone With the Wind, but it's all goo. This film really is something. I think this was the first movie I saw.