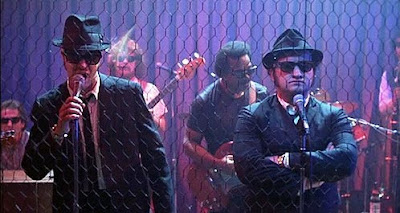 By John Cochrane
Today marks the 30th anniversary of the release of The Blues Brothers (1980) — still easily the best movie ever to come out of the Saturday Night Live franchise. The film is a bigger-than-life blend of comedy, great R&B music and over-the-top stunts and car chases, and to see it again today is to be reminded not only of another Hollywood before CGI took over — but of what the world of comedy lost when John Belushi died tragically of a drug overdose, less than two years later. 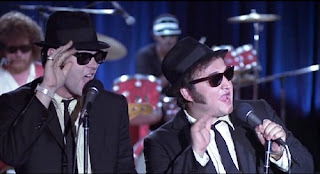 R&B. After Shore suggested the name The Blues Brothers, the duo got together with keyboardist and future Letterman bandleader Paul Shaffer (who was barred from appearing in the original film due to contractual reasons), and began to assemble a first rate collection of musicians to back them up — including horn players Lou Marini and Tom Malone from the group Blood Sweat & Tears, as well as Steve Cropper and Donald “Duck” Dunn from Booker T. & The MGs. The band, which played covers and blended New York-style horns with a Memphis/Chicago-style rhythm section, cut a surprise hit album (Briefcase Full Of Blues) and appeared successfully in musical performances on Saturday Night Live. After being asked to open for Steve Martin in Los Angeles and the Grateful Dead at Winterland, it was obvious that the group had taken on a life of its own. Dan Aykroyd set about to write a screenplay to flesh out the mythological origins of the band.

The resulting musical, directed by John Landis (who edited down a 324 page script from Aykroyd), centers around Jake and Elwood trying to raise $5,000 worth of tax money for the Chicago orphanage where they 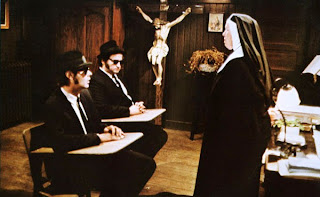 grew up, before it’s sold off to the Board of Education. (Ignore the fact that in real life, the church-run orphanage would be tax-exempt.) After an epiphany at a church service conducted by James Brown, they set out to reform their old band — whose members went their separate ways when Jake was sent to prison for robbing a gas station. Claiming that they're on a mission from God, the brothers are relentless in achieving their goal by the tax deadline — driving all over the greater Chicago area, destroying a shopping mall, stealing a country group’s bar gig, dodging the attacks of a mystery woman with a grudge and many explosives, and crashing through a rally of the Illinois Nazi party — all the while keeping a Dragnet-style decorum of non-reaction to the chaos around them, and their ever-growing group of pursuers. 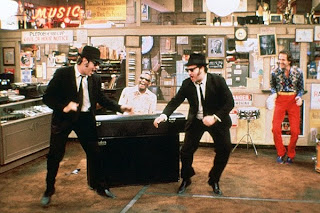 The film runs almost two and a half hours — almost unheard of for a comedy, and could have easily been a disaster, (Landis equated the shooting to managing a war.) yet the movie holds up extremely well as great entertainment. It doesn’t hurt that there are appearances by additional R&B and jazz legends like Aretha Franklin, Ray Charles, John Lee Hooker, and Cab Calloway, which are smoothly worked into the plot line. And as excessive as it may have seemed at the time, there’s amazingly little padding to the script, as the story moves from one classic scene to another — featuring cameos from the likes of Frank Oz, John Candy, Carrie Fisher, Charles Napier, Henry Gibson, Steve Lawrence, Steven Spielberg and Twiggy. The picture culminates in Daley Plaza, with one of the fastest and most impressive car chase scenes ever filmed. (The extended sequence set a world record for car crashes in a movie up to that time, and required a special FAA air-worthiness certificate to drop a car out of the sky from more than a mile up.)

The reason the picture works is despite all the destruction happening on the screen, there is just enough plot and character development to believe that Jake and Elwood would be compelled to do this. (After all, they are

ultimately trying to do a good thing.) Their chemistry seems genuine and their enthusiasm for the music is contagious. Sure many stunts and details are implausible or unexplained. (Why do the Good Ol’ Boys show up so late to their gig? How does Jake’s jilted ex-fiancee Carrie Fisher have access to her never-ending military arsenal? How does the Nazis’ car get so high up in the Chicago skyline before dropping into that intersection? Would seemingly every member of the Illinois military and police be chasing them? Why is saxophonist Lou Marini’s upper body cut off in the frame during Aretha Franklin’s performance of “Think?”) Never mind. This is a popcorn movie, not Ingmar Bergman. The real question is whether you’re having a good time, and for that purpose, The Blues Brothers delivers in spades.


The Blues Brothers got mildly positive reviews and did decent domestic box office, achieving its cult status later on through video and cable TV. Belushi was dead by early 1982 — fondly immortalized not only in this film, but also Landis’ raunchy, seminal classic National Lampoon’s Animal House (1978) and his five-year tenure on SNL. Aykroyd and Landis still had a few great pop culture movies in them before their careers largely faded from view toward the end of the ‘80s. The R&B stars who appeared in The Blues Brothers saw their careers revitalized as music fans remembered what had made them so great in the first place, and the genre as a whole received a resurgence in popularity, which remains to this day.

In 1998, Landis and Aykroyd reunited to make Blues Brothers 2000, a dreadful sequel that forgets everything that made the original so great. Despite having an even more impressive roster of musical guests, Blues Brothers 2000 simply recycles elements form the original movie in a razor-thin plot minus any rational thought, purpose or humor, and builds itself around awkward and watered-down musical set pieces that are mostly cringe inducing. Even the car stunts are lifeless. (Literally — if you look closely at the pileup of cop cars toward the end of the film, they don’t have any drivers in them.) Especially annoying is the addition of Buster Blues, a Macaulay Culkin wannabe, included for no other reason but to appeal to the Home Alone crowd, who wisely stayed away.

Where the sequel is safe and lazy, the original is anything but. Landis has said that it would be near impossible to make The Blues Brothers today. We can be grateful that it was made at that point in time when Belushi and company were at their peak and Hollywood was still willing to take chances — before the era of blockbusters and avoiding risks. Turn up the volume.

Comments:
Love this film! It's one of those rare comedies that I can put on and watch just about any time. And you're right, it is easily the best SNL spin-off film to date... not that there's much worthy competition (CONEHEADS?!). I have fond memories of discovering this film as a kid and loving the many car chases (and crashes) but my appreciation for it has deepened over the years for all the little details and fantastic musical numbers.