Truth and fiction in Dogtown 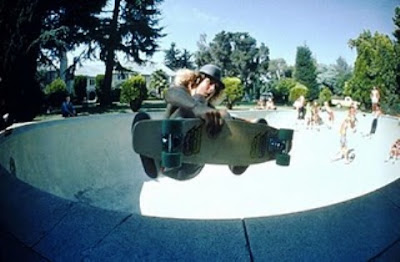 By J.D.
In the mid-1970s, California was hit by a crippling drought that made it impossible to surf any kind of decent waves. The locals in an area of West Los Angeles known as Dogtown always had skateboarding to fall back on when the surfing wasn’t any good. They all hung out at a local surf shop that reflected their surroundings: a rough seaside slum that fostered a proudly anti-establishment image because they all felt like outcasts. The surf shop was a place where these kids felt like they belonged.

The core group consisted of 12 kids who rejected the tried and true skating techniques of the 1960s for a more aggressive, stylish approach inspired by the way they surfed. Amazingly, no one had thought of doing this before and it blew the world of skateboarding wide open. Dogtown and Z-Boys (2001) is a documentary that traces their origins and the rise and fall of this group, known as the Zephyr team (or Z-Boys for short), from the perspective of its members.

At the time, there were no skate parks so the Zephyr team had to skate in deserted schoolyards and then, once they discovered them, empty swimming pools drained by the drought. They ended up being the perfect spots for skating and ushered in the era of vertical skating thanks to the influence of surfing and the vision of one of their own, Tony Alva. The only problem with skating in background pools is that the Z-Boys weren’t supposed to be there and a session would end suddenly when the owners or the cops showed up.

Finally, skateboarding enjoyed enough of a resurgence that a national competition surfaced in Del Mar in 1975. The Z-Boys got a team together and came in with their punk rock aesthetic and blew the minds of people used to the hopelessly outdated ‘60s style. However, the downside came in the form of rich skateboard companies that broke up the Z-Boys with the lure of money and fame. Within a year, their beloved surf shop was out of business.

The documentary goes on to trace the rise of several of the Z-Boys, like Alva, Stacy Peralta and Jay Adams, into superstars. They were treated like gods in the skateboarding world and went from living off the streets to having all kinds of money, fame and women thrown at them. Some of them, such as Adams, couldn’t handle the sudden fame and fortune. It’s a shame because he was the most natural and spontaneous of the team, a brilliant “athletic stream-of-consciousness,” as one person puts it. However, Alva and Peralta were able to diversify and take control of their careers and still skate today, capitalizing on their early success.

The impetus for this documentary came from an article that appeared in Spin magazine about the Z-Boys. Within a week of it hitting newsstands, six major Hollywood studios contacted Stacy Peralta wanting to buy the life rights to their story and make it into a fictional film. Executives were able to get Tony Alva and Jay Adams on board but Peralta agreed only on the condition that he would have some input. The studio refused and he decided to do a documentary on the Z-Boys himself. Peralta was able to get Vans, a skateboarding gear manufacturer, to finance the film for $400,000 and give him complete creative control. With his connections to the scene, he was able to get access to all the key people who were around back in the day.

There is an infectious energy to this documentary that mirrors its subject. Gone are boring talking heads mixed with standard stock footage. Instead, we are presented with stills and vintage footage taken back in the day that comes to life thanks to kinetic editing and period rock ‘n’ roll music setting just the right tone.

Like its subjects, the doc’s style lets it all hang out. For example, at one point, the film’s narrator, none other than Jeff Spicoli himself, Sean Penn, clears his throat in mid-narration. Most slick docs would have edited this out but director Stacy Peralta keeps it in. It is these little touches that make Dogtown and Z-Boys distinctive.

What also gives Dogtown and Z-Boys such authenticity is that it was made by one of their own, Peralta, and this gives the documentary unprecedented inside access that an outsider would never have. This is a fascinating look at these maverick skaters and how they influenced contemporary skateboarding that we now take for granted.

Dogtown and Z-Boys was a hugely successful documentary chronicling a group of wild skateboarders in Venice Beach, California in the ‘70s. Why dramatize an already great documentary that pretty much says it all? Naturally, Hollywood got interested and wanted to make a fictional version (because hey, no one watches docs, right?) with Fred Dirst (of Limp Bizkit fame) directing and David Fincher producing.

Fortunately, someone came to their senses and Dirst was out with Fincher taking over but the budget for his vision was too large. So, the studio opted for a low budget take with independent film darling Catherine Hardwicke, fresh from the success of thirteen (2003), taking over as director. In an effort to keep it real, Stacy Peralta, who made the Z-Boys doc, wrote the screenplay for Lords of Dogtown (2005) and worked closely with Hardwicke in order to remain true to what he and his friends went through all those years ago.

The film takes us back to the heady days of 1975 when the Venice Beach locals would surf the dangerous waters where you could easily get brained by a piece of the nearby pier. These are tough kids growing up in a tough neighborhood and out of it came a group of young surfers who adopted the same style they used to attack the waves to skate asphalt and concrete: Jay Adams (Emile Hirsch), Tony Alva (Victor Rasuk) and Stacy Peralta (John Robinson).

One of the reasons why Lords of Dogtown works so well is because of the superb casting. The actors who play the three lead Z-Boys are dead ringers for their real-life counterparts. In fact, the entire cast looks and 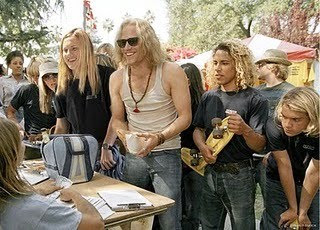 sounds like the real people. In particular, Emile Hirsch is excellent as Jay Adams, a naturally gifted skater who comes from a troubled home. Hirsch is wonderfully cast against type as an edgy, brooding teen — it’s a world away from his naïve dreamer that he played in The Girl Next Door (2004).

Thankfully, the film’s producers didn’t raid the WB cabinet for the young cast. Instead, they got Hirsch, Rasuk (from indie fave Raising Victor Vargas) and Robinson (from Gus Van Sant’s Elephant) who have some actual acting chops but not a high enough profile so as to distract. They disappear into their roles as does, surprisingly, high profile actor Heath Ledger. He does an excellent job of becoming his character, one of the Zephyr skate shop owners who is a burnt out drunk but has vision and tries to protect his team of young skaters.

According to Peralta, he made sure to teach the actors how to “look comfortable on a board.” To this length, the actors portraying skaters underwent a three-month training course led by none other than Alva with surfing in the morning and skating in the afternoon. Of the three lead actors, only Rasuk had no board sport experience before the film. The actors not only had to learn the distinctive skating style of the ‘70s but had to do it on vintage equipment from that era. Not surprisingly, the actors suffered all kinds of skating-related injuries during the course of training and filming but there hard work paid off as is evident from the final result.

Hardwicke adopts a down ‘n’ dirty approach to the look of her film. She uses a lot of hand-held camerawork and grainy film stock that makes you feel like it was shot by someone who was there. The film’s warm color scheme is filled with yellows, browns and reds for an almost sunburnt look with grey-blues for the ocean/surfing scenes. The style of the film is never gimmicky; the story dictates the style. The attention to period detail is flawless: the pool surfing, the convenience store cuisine and the music.

These kids aren’t driving around in brand new Mustangs or Woodies but beaten-up junkers as befitting their social status. The film uses period music that is typical of the era but doesn’t rely on the really popular, obvious tunes except during appropriate times like at a party where you would listen to crowd-pleasers like that and so it is justified.

The trailers for this film totally misrepresented it as an over-processed, heavily edited piece of lunchmeat. Instead, Lords of Dogtown perfectly evokes the times it depicts with unerring authenticity. It portrays skaters as they were back then — stylish and below the radar, just before the sport took off to the wildly popular institution that it is now.

Lords of Dogtown shows how fame eventually broke up the Z-Boys. It was inevitable. These kids came from nothing and were suddenly thrust into the spotlight and all kinds of money was thrown at them. Alva and Peralta became hugely popular and went corporate, constantly competing with each other while Adams stayed true to his roots and walked away from it all because he was in it for the love of skating and the thrill of the ride.

This film will bring back a lot of memories for people who grew up and skated during these years, making this film more than just a simple retread of the Z-Boys documentary.

Comments:
This is a pair of films that I've missed for some reason. With this summer fast approaching (and the summer movie season kicking off on Friday), I've got no excuse. They're in the Netflix queue now. Thanks for this, J.D.

It is interesting to compare the two. Obviously, the doc. is the superior because you're getting the real story right from the people who lived it but as far recreations go, I thought that LORDS OF DOGTOWN was quite good - the cast of the three lead skaters was fantastic and really makes the film work.